Revolutionaries of design Issey Miyake and Rei Kawakubo have fused east and west to establish an aesthetic that goes beyond national identity. Their innovative approaches to fashion have baffled and transformed us for the past three decades. Beneath a surface of metamorphosing modern forms, the intellectual core of their work is solidly informed by the traditional principles of Japanese design.

A new generation of creative designers came of age in the chaos of post-war Japan, a time of radical political and cultural change. It was then that western clothing replaced the kimono as the usual dress of daily life. Traditional codified attire was swept away, and the Japanese fashion system re-invented itself from a model aesthetically and structurally foreign to Japanese ways. New forms emerged, rooted in a culture that had spent centuries searching for beauty and balance in all aspects of life.

The work in Japanese by Design retains a respect for craftsmanship that manifests itself in the knowledge of the nature of chosen materials, an understanding of the discipline imposed by structure, and a control of technical processes. The freedom that emerges from this time-honored approach permits the creation of new styles that satisfy both traditional tenets of eastern design and the cutting-edge visions of radical chic.

From the conjunction of old and new, a unique vision was born. During the recent past Japanese fashion designers have searched, questioned and shaken the foundations of western dress. They have invigorated and modified it profoundly along the way. The creations of Miyake and Kawakubo bring the art of clothing design to a different level, and propose new proportions, diverse sensitivities, and an original take on comfort and appropriateness. In them we find a fresh perspective.

The Kent State University Museum would like to thank Mary Baskett for sharing her knowledge of contemporary Japanese design, for the inspiration and enthusiasm she brought to this project, and for temporarily parting with pieces from her wardrobe. Japanese by Design would not have been possible without her unfailing generosity. 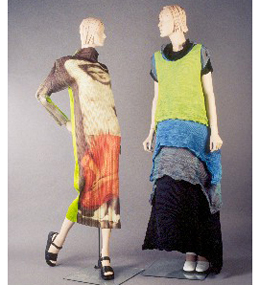