Born in lush oases scattered in a barren desert landscape, Central Asia's spectacular ikat fabrics reverberate with beauty, energy and life. Intricate motifs in hazy patterns glow with scintillating colors. Their textile artistry is created through a process of dyeing and weaving called abrdandi or "banded cloud." These chromatic experiments echo the ultimate mirage in arid Central Asia, the reflection of clouds on water.

The Malay-Indonesian term ikat, used in the west to describe these fabrics, is derived from the verb mengikat, which means "to bind, tie or wind around"(1). A technique popular in many parts of the world, including Southeast and Central Asia, Japan, and Yemen, ikat is created by binding threads to form areas that will resist coloration. The more colorful and complicated the motifs, the longer and more elaborate the binding and dyeing process before the weaving of the cloth can begin. Despite meticulous care in binding, resist dyeing inevitably results in motifs with blurred edges, as the dying and weaving processes cause unpredictable distortions.

Although evidence for their earlier existence is scant, Central Asian ikats emerged as a compelling art form during the region's urban renaissance, which occurred in the 19th and early 20th centuries. Springing from a long history of trade and traditions going back as far as the fabled East-West trading path known as the Silk Road, the most brilliant ikats were the result of complex inter-ethnic cooperation. Muslim and Jewish artisans joined forces to create these fabrics, which remain to this day a symbol of national identity and pride. 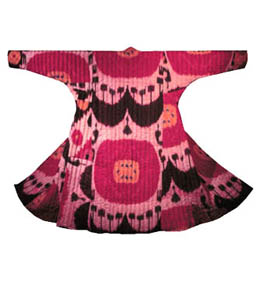