The Kokoon Arts Club of Cleveland, Ohio, was founded in 1911 by a small group of commercial artists employed at the Otis Lithograph Company. Meeting first at night in a vacant tailor's shop, the Club's founding members pledged themselves to explore the "New Art." This they did, with gusto and paint.

Through a full calendar of members' shows, sketching excursions, auctions, lectures, theater and musical productions and classes, the Kokoon Arts Club became a fixture of Cleveland's arts scene throughout the 1910s and 1920s. To fund their activities and pay the mortgage, the Kokoon members in 1913 inaugurated an annual bal masque, a bohemian revel that by the 1920s attracted thousands of free-spirited Clevelanders.

Yet such revelry was not to last. The Kokoon Arts Club lost vitality as Modernism became less an outsider's intellectual pursuit and more mainstream. Membership declined during the Great Depression and World War II. The last bal masque was held in 1946, and the Club was dissolved in 1953. 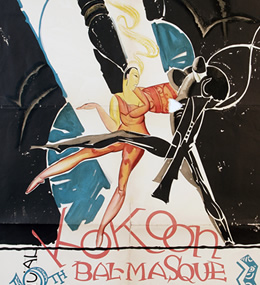