In Tibet theories about religion, its spiritual power and tenacious hold on the human imagination become reality. Tibet is a repository of some of the most ancient beliefs and rituals. It houses temples such as the magnificent Jokhang in Lhasa, the ethereal national cathedral of Tibetan religion, where one can immerse oneself in an atmosphere that evokes the great temples of antiquity.

The land of Tibet is given its deepest imprint of spirituality by the Tibetan people, whose pilgrimage fervor and devotion to Buddhism can never be quenched. The followers of this Indian doctrine attributed to Gautama Buddha, believe that suffering is inseparable from existence but that inward extinction of the self and of the senses culminates in a state of illumination beyond suffering and existence.

Tibet is also a land of "power places," as a Tibetan phrase expresses: mountains, valleys, rocks, caves, rivers and lakes are scattered with sacred Buddhist structures such as temples, chapels within monasteries and chortens, which are shrines also known as stupas. These sanctuaries have become consecrated because of the miraculous visitation or intervention by Buddha or one his holy followers, the Bodhisattvas. The sacredness of these structures also could have resulted from their having been touched, visited or sanctified by one of the great Indian or Tibetan saints, or because they reflect some aspect of Tibetan Buddhist cosmology.

The photographs exhibited at The Kent State University Museum come from a number of my visits to Tibet, beginning in 1994, through my most recent visit in the summer of 2000. In them we can see a land of high mountain desert, which is covered for much of the year by wind-blown sand. Vast drifts of sand cascade down the mountain slopes and spill onto the roads into the river bottoms like billowing brown glaciers. This harsh terrain also nurtures verdant valleys, fabulous flowers, fruits and grains which blossom and grow in the spring and give the countryside color and vitality into the Fall. This striking country and its people have suffered terribly under the oppression carried out by the regime of the People's Republic of China, and they still lack full expression of their beliefs. But much about this mysterious high mountain land remains intact, or is being rebuilt. There is a deeply moving and magnetic sense of spirituality in Tibet that irresistibly draws me back. 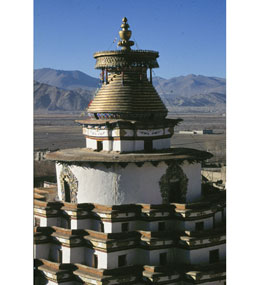