In 2010, Michael Kors' label will enter its thirtieth year in the fashion industry. Worthy of praise for longevity alone, his namesake company, established when he was only 22, now comprises clothing for women and men, accessories, fragrances and beauty products and is firmly established in America, Europe and Asia. Recognized as one of the country's preeminent designers and entrepreneurs, Michael Kors has stayed true to his goal to design "chic, luxurious American sportswear." Through hard work and determination, he has carved himself a place in the heart of distinguished individuals worldwide. His peers at The Council of Fashion Designers of America have nominated his work countless times and have bestowed on him both the Womenswear (1999) and Menswear (2003) Designer of the Year awards. With wit, pragmatism, and an indomitable spirit, this talented man has created an empire.

An important part of Michael Kors' success is his ability to understand his clientele. "My collections have never been about runway hysterics,'" he explained in a recent New York Times article. His clothes strike a balance that few designers attain: they are luxurious yet sporty, embracing the past while always rooted in a contemporary lifestyle. Glamour and practicality co-exist because Kors has consistently been able to bring into play the Goldilocks phenomenon (not too hot, not too cool—just right). This Midas touch has resulted in wholesale revenues that totaled $600 million for his sixty American stores in 2008. A media star due increasingly to his participation as a judge on Project Runway, he remains a virtuoso of trunk shows where he spends time on the selling floor with customers, sales associates and merchants, who recognize his integrity and great sense of humor. Kors keeps it real: "I can make something beautiful, but if it doesn't work in real life, then to me it's a disaster." Quality for the price is also of great importance, which is why he has developed different labels. His design and marketing strategies are not unlike those of Calvin Klein, Ralph Lauren and Donna Karan, whose shoulders he stands on. Hailed as the next big name in American design for the past decades, he remains cautious: "The minute you think you're there, you're done for." He once mused, quite accurately: "I am the oldest young designer in New York City."

In presenting the first museum exhibition dedicated to the work of Michael Kors, the Kent State University Museum also pays tribute to the late Wendy Zuckerwise Ritter. These two exceptional individuals crossed paths early in their careers when Michael presented trunk shows at Bergdorf Goodman, where Wendy masterfully headed the Donna Karan boutique. When the Michael Kors flagship store finally opened on Madison Avenue in 2000, the recently married Wendy was asked to consider commuting between her new home in Dayton, Ohio, and Manhattan. Her commitment to customers, knowledge, passion, and generosity was valued and, for the last eight years of her life, Michael's success was also her own. 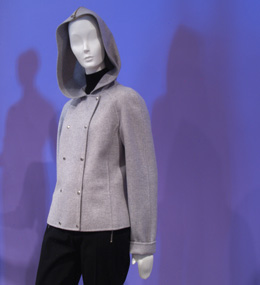