Blue of indigo is the key to a continuing story that links the past and the present. Considered one of the finest dyes of the ancient world, it continues to be among the most beloved colors. A dominant force in fashion, indigo denim is now ubiquitous, and serves to further the trend for informality in clothing as it draws from its utilitarian roots. Though indigo dye was found in an Egyptian mummy's bandages from ca. 2400 BC, the dye's use is said to have originated in India where the earliest archeological evidence dates from 2000 BC. Its original popularity is partly explained by the rare ability of some indigofera plants to generate an intense coloring matter with an almost universal capacity for fixation to cloth without the use of a mordant. Grown in tropical, subtropical and some temperate climates, indigo's history is embedded in many cultures, which serve to make it one of the most appealing and popular dyes of all time.

The importance of indigo is far-reaching as it brings together natural history, science, technology, economics, politics, art and spirituality. An essential part of the human experience, colored garments served to camouflage stains and dirt on work clothes long before it expressed individual choice. The dark shades that were possible with indigo dye, and its colorfastness, made it popular in eras when washing was sporadic. The plant's leaves also had various medical uses, such as treating snakebite in Japan, which transferred to indigo-dyed cloth a protective function against reptiles for farmers working in the rice fields.

As indigo became synonymous with the working classes in many countries, it gained a considerable place in the global economy. Explorers and merchants sought it and, by the last quarter of the nineteenth century, chemists tried to unravel its mysteries. By this time, the indigo market was dominated by Britain through its Indian colonial plantations, which were the Empire's most profitable Asian industry. In 1877, Adolf Baeyer synthesized indigo in Germany. Though he won a Nobel Prize in 1905 for his continuing work on the molecular structure of indigo, it was the Swiss Karl Heumann who found an industrial method for producing the artificial dye, in 1897. This shifted world economies and affected political powers as well, but it did not detract from indigo's magnetism. If anything, it made it stronger.

As the sun sets and the sky turns shades of indigo blue, the universe seems contained in a color that guards its mystery. From the exchange of blue beads for human lives in the African slave trade to the deeply emotional melodies called the blues, many respond to this color in a visceral manner. Selected contemporary creators have kindly participated in this exhibition. Their work in fashion design and fiber arts can thus be seen within a global and historical perspective. Through this microcosm as changeable as the ocean, immerse yourself in nature's deepest blue. 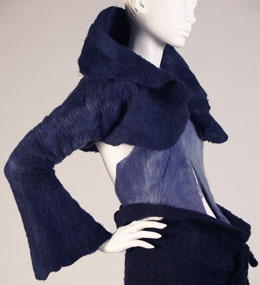