NATIVE AMERICANS THROUGH THE PRISM OF CULTURE: EDWARD S. CURTIS & THE LEGACY OF COLLECTORS

As we gaze upon others, we can learn much about ourselves. Like a beam of light distorted through a crystal prism, our understanding of other cultures is filtered through our own. The inherent transparency of a lens does not infer objectivity. The photographs presented in this exhibition are part of the series The North American Indian written, illustrated and published between 1907 and 1930 by Edward S. Curtis. The twenty volumes and portfolios from the Stan Hywet Hall & Gardens collection aimed to be a comprehensive record of a people whose way of life was, according to Theodore Roosevelt in the first volume's foreword, "on the point of passing away." Through these images, and with artifacts in the Kent State University Museum and the Valerie and Dean Hugebeck collections, we can focus on Native American identity and address the issues of subjectivity and idealism in the act of collecting and exhibiting cultural material and in the work of Edward S. Curtis.

There are multiple storytellers. A limited number of individuals were chosen as subjects by the photographer, whose work was then sought by collectors, and these combined voices were further narrowed through the curatorial process. Through selection, interpretation and juxtaposition, the narrative is seldom objective. This story is fragmental and told by a costume historian in the twenty first century. People and adornment are its focus. In today's multicultural familiarity with body modifications such as ear, nose and tongue piercing, tattoos and scarification, a new appreciation can be gained of what was once considered strange. Broader views of gender have also impacted how hair, clothing, cosmetics and jewelry can be used by both men and women as a marker of individuality and collective character. This enables a far different viewing of Curtis' work than would have been the case a hundred or even twenty years ago. The artifacts on display are historical documents, but they are also portraits of individuals whose voices, though filtered, can be heard, and whose culture and sense of identify are proudly displayed through sartorial means.

Native American culture was, and still is, alive and ever changing. Curtis embarked on his journey to capture and document the lives of the Native peoples of North America in 1889 amidst devastating political legislation designed to "civilize Indians." Frontier expansion, industrialization and globalization had already caused unprecedented changes in Native American lives. Fearful of the impending doom, yet reverential, Curtis' vision was a product of its time and was marked by the imaginative and emotional appeal of the heroic, adventurous, remote, and mysterious. Through the lens of his camera, an idealized world took shape where, as an outsider and an artist, many of his own perceptions distorted his initial factual intentions. At times staged and inaccurate, his haunting photographs captivated his contemporaries and have shaped our vision of the First Nations to this day. Paradoxically, his search for what he considered to be "primitive life" was funded by industrialists whose efforts accelerated the onslaught of modernization. Franklin Augustus Seiberling, the co-founder of the Goodyear Tire & Rubber Company, was among the captains of industry who subscribed to and received Curtis' work in installments. At Stan Hywet, his magnificent country estate with its engineered views of nature, Mr. Seiberling could, through Curtis' work, further distance himself from the growing urban chaos. Though criticized by archeologists and historians early on, Curtis' body of work covers over 40,000 photographs as well as linguistic terminology, songs, oral histories and sound recordings and continues to appeal to both scholars and the general public despite its flaws.

The "broad and luminous picture" Curtis offered the viewer is not unlike the acts of collecting and displaying artifacts, which remain riddled with imperfections. Though these activities help to preserve pieces of history and fuel public interest, they are nonetheless selective approaches that can narrow our vision and understanding of world cultures. The visual compositions, the artifacts collected, and the stories told are a legacy that continues to be questioned and examined. 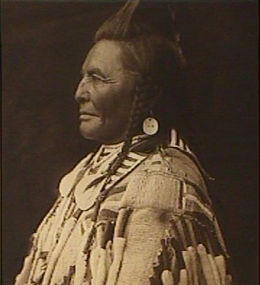