Establishing authenticity for African art objects has been a concern of academics, museum curators, collectors and gallery dealers for more than fifty years. The continuing scholarly fascination was reflected in the 1976 special issue of African Arts on "Fakes, Fakers and Fakery". However, the question of what defines authenticity for the visual culture of Africa is complex and only some aspects of the issue have been investigated. Early studies focused on establishing categories based on style that unfortunately did not fully reflect the diversity of materials and forms worked in Africa much less their value to African peoples. Objects that were made in Africa - in an recognized ethnic style - by African Artists for African patrons were classified as authentic. Although useful, there are limitations to such an approach. The awareness of style as a fluid and multidimensional concept is basic to understanding the dynamics of African art. There are many levels in which style can function and these range from an individual level to a large cultural area. The style of any ethnic group consists of the varied individual and local styles of particular periods and media.

Moreover, ethnic groups in Africa are not and have never been hermetically sealed, static units but rather characterized by shifting patterns reflecting migrations, borrowings, adaptations and various types of internal change. It is therefore necessary to recognize change and adaptation when attempting to establish authenticity. The concept of cultural authentication suggested by Joanne Eicher and Tonye Erekosima in 1979 suggests a useful approach for understanding the process of change. Cultural authentication requires not merely the acquisition and borrowing of artifacts but their transformation (at different levels of adaptation) to make them part of the receiving culture . The authentication of the item for the receiving culture is achieved through the alteration of its original nature or appearance. A prime example is the Ijo pelete bite cloth in which a plaid commercial cloth is altered by cutting and pulling threads to create a new design. . As a result of this transformation the item also assumes a new social role and meaning. For thousands of years, new materials, objects and techniques have been introduced into Africa from the outside and modified to fit indigenous needs and tastes. The use of commercial paint, plastic, trade beads, lurex thread or imported textiles, for example, does not necessary invalidate the authenticity of an object. Yet, art showing evidence of modernity is often rejected by collectors and museum curators seeking their idea of authenticity.

As elsewhere in the world, patronage is an important aspect of the art process. In an art patronage system, producers, consumers and products are linked in dynamic interactions that continually recreate art traditions in response to patron demands. Out group patronage can have significant impact on the style or even function of an art form. Visitors from Europe and America have instilled new meanings into African art from the 16th century to the present day. Since the mid-20th century, there have existed lively workshops producing objects for the Western market that range from reproductions of traditional forms to tourist art or Afrokitsch.

A major determinant for authenticity is that of function. Many scholars have maintained that an object - no matter what it's appearance - which has not been used in a traditional context at it's place of origin is not authentic. However, others contend that different types of authenticity may coexist. African societies have changed dramatically since the early 20th century - including the nature of African art. To base authenticity exclusively on old ideas of what constitutes style and function is not intellectually sound. When considering the African diaspora or recent developments in contemporary African art, the idea that only objects "made in Africa, by Africans for Africans are African" breaks down. This issue and others will be explored further by Jordan Fenton in his essay, which will also make more direct reference to works in the exhibit. 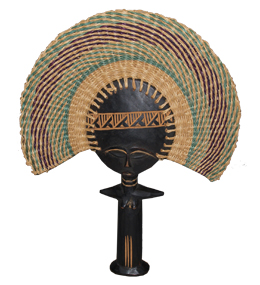