The history of quilts in Ohio is in many ways a reflection of the history of Ohio itself since the early nineteenth century. Just as early settlers boasted a variety of origins ranging from migrants from New England to Germans who arrived either directly from Europe or from earlier settlements in Pennsylvania, their quilt traditions reflected their diverse origins. Quilt making took off around the middle of the nineteenth century owing to improvements in textile and thread production which made materials accessible and increasingly affordable. Inventions such as the power loom then cylinder printing ultimately led to the production of large quantities of printed cottons. Changes in women’s fashion also favored a growth in the creation of decorative quilts. By the 1860s women’s clothing was increasingly shaped from pieces of cloth rather than utilizing the entire width of the fabric. This created fabric scraps which could be pieced into quilts. More affordable textiles mean that rather than completely wearing out clothing, new dresses could be purchased, thus freeing up the old clothes to be repurposed into quilts. The widespread adoption of sewing machines by the end of the century also made the creation of clothing less time consuming and freed up women’s time for making quilts.

With two layers of fabric and a layer of batting in between, quilts served a critical function of providing warmth. Quilts could be quite utilitarian with little decorative stitching or at the opposite extreme they could be highly ornamental, created out of lightweight silk with little batting. Difficult to clean with their delicate fabric and embroidery, crazy quilts represented a luxury that was widely embraced across the United States in the 1880s. They reflected their era not just in their embodiment of Victorian taste with an exuberant combination of colors and textures but in their very impracticality. At the other extreme Amish quilts reflected their makers’ adherence to strict rules and rejection of the whims of fashion.

One of the most extraordinary quilts in the KSU Museum’s collection is attributed to Elizabeth Hobbs Keckley. Born a slave, Keckley learned dressmaking then bought freedom for herself and her son. She lived many years in Washington, DC where she worked for the wives of many prominent politicians including Mary Todd Lincoln. The quilt is pieced together from pieces of dress fabric which appear to be from the 1860s. Keckley lived in Ohio when she served on the faculty of Wilberforce University. 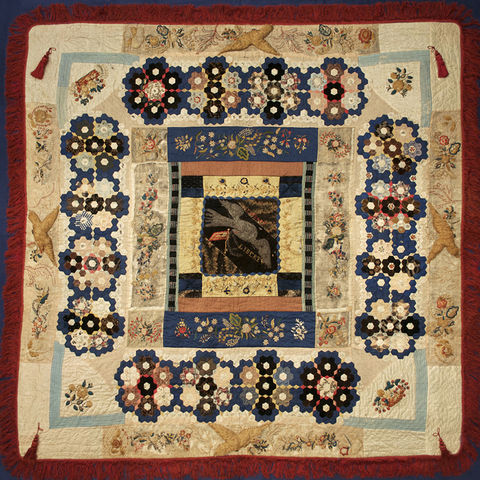