From the moment he discovered his passion and talent for fashion design, Oscar de la Renta created elegant day and evening wear for discerning women. He has never lost sight of the woman who will ultimately wear his creations or her lifestyle, for he maintains active engagement with the fashion industry and with the social milieu in which his clients move. Oscar de la Renta's insight and appreciation of the needs of his clients are rewarded by their loyalty.

The Kent State University Museum has been the recipient of three important gifts from Oscar de la Renta that encompass his career. In 1983 he presented the founders, Shannon Rodgers and Jerry Silverman, with 45 pieces from his Spring 1982 collection. Again in 1986 he presented 38 pieces from the earliest phase of his career beginning with dresses he created for Jane Derby in 1965. In response to a request to lend dresses from a current collection for this exhibition, Oscar de la Renta has given the museum four spectacular pieces from his Spring 2006 collection. The exhibition is drawn from these gifts and those of other donors and spans his career from his arrival in New York in 1963 until the present.

Oscar de la Renta was born in the Dominican Republic July 22, 1932. He studied art in Madrid beginning in 1951 and apprenticed with Balenciaga while in Spain. In 1961 he went to Paris where he worked as a design assistant to Antonio Castillo at the House of Lanvin. He arrived in New York in 1963 to design the couture collection for Elizabeth Arden, and soon Vogue for April 1, 1963, described a coat and hat by "Elizabeth Arden's new talked-of young designer, Oscar de la Renta." Believing that ready-to-wear would be the future of fashion, he began a partnership with Jane Derby in 1965, acquiring a portion of the company with the financial backing of Ben Shaw. Jane Derby died on August 9, 1965, and the label was changed to Oscar de la Renta's name alone in 1966. However, he was linked with the Jane Derby label in Vogue magazine editorial spreads through April 15, 1967. In partnership with Ben Shaw's son, Gerald, Oscar de la Renta took full control of the company in 1974. Gerald Shaw retired as president and CEO in 1994 and was succeeded by Jeffrey Aronsson who held the position until 2003 when Alex Bolen became CEO. The combination of exceptional design and excellent corporate management has enabled the continued success of the company.

This exhibition highlights the consistent design approach to creating collections that include as many as 93 different looks, as did the 1982 collection, and demonstrates the masterful use of theme and variations in building the large and diverse collections Oscar de la Renta shows each year. DVDs of the Spring 1982 and the Spring and Fall 2006 collections, to be seen in the adjacent viewing room, provide a larger context for the pieces shown in the exhibition.

The Kent State University Museum is grateful to the Friends of Fashion for their support of this exhibition, to the Ohio Arts Council for a two year Sustainability Grant, and to the John P. Murphy Foundation for a grant to enhance museum lighting. 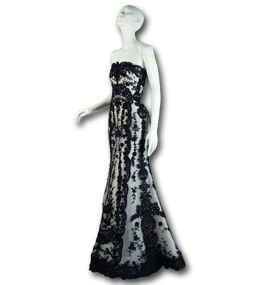