PANACHE: PAIGE PALMER - A SALUTE TO FIFTY YEARS OF FASHION AND FITNESS

Introduced on the air in Cleveland, Ohio at WEWS on January 13, 1949, as the "First Lady of Physical Fitness," Paige Palmer starred in her own television program for 25 years and kept women in Northeastern Ohio tuned in as she told them how to stay young looking, thin and glamorous. Decades ahead of her time, Paige Palmer was the first in the nation to bring a regular exercise regimen to her viewers complete with patented exercise equipment and apparel bearing her name.

The museum exhibition highlights the years on Cleveland television, the fashion and fitness promotions, the travel, the celebrities, and the personal panache that have kept Paige Palmer in the spotlight for fifty years and more.

The station brochure seeking potential sponsors for her show called her "A Lady with Sensational Style Who Sells and Sells and Sells." The mere mention of a product on the "Paige Palmer Show" found it flying off the shelves. The exhibition looks at the way the  business of fashion merchandising was practiced during the time span of the show, and how a television personality in the early years of television participated in fashion and product promotions. 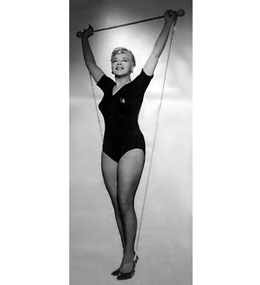