When Paul Tople's parents gave him a photograph processing kit for Christmas when he was 14 years old, he thought that was the "dumbest gift" ever. His mother and father weren't photographers, and he had never taken a picture in his life. He had no idea at the time that the kit would serve as a symbol of his destiny.

After working his way through college by photographing weddings and working part-time at the Barberton Herald, Paul graduated from Kent State University in 1970. A photojournalism major, he worked for the School of Journalism and Mass Communication's Chestnut Burr magazine and yearbook, as well as the Daily Kent Stater. After graduation, he began a notable career as a photographer at the Akron Beacon Journal. During his 30 years at the newspaper, he was a member of distinguished news teams that won three Pulitzer Prizes. When asked to describe his career in a few words, he said: "Without a doubt, it has been an interesting journey in photojournalism."

"I remember the days of walking into the back shop at work when you couldn't hear yourself talk because the linotype machines were so loud - they were deafening," he said. "The camera I used was a 2¼" x 2¼" format RolleiFlex. Today, we hear only the soft tapping of the computer keys, and I have a digital camera that I'm still learning how to use." Paul said the changes in technology throughout the past 30 years have been almost unbelievable, yet they have provided him with new opportunities. It was change, he said - and the fact that Knight-Ridder has constantly invested in new technology - that kept him interested in the profession.

Throughout the years, Paul has had many mentors such as former photojournalism professors Charlie Brill because "his enthusiasm was contagious" and Henry Beck, "who looked at me and said, 'I except to see great things from you.'" Paul also considers Bill Beers, a fellow Boy Scout leader, as his mentor. "He showed me that I could accomplish anything by practicing leadership skills." Perhaps Paul's most influential mentor was his father, Clarence, who died in 1995. "He showed me that I shouldn't be afraid to do something. He also taught me to respect people and that all things are possible if you work hard," he explained.

And his strongest supporter over the years is his wife, Terri. Because he didn't have a "9 to 5" job, Terri was primarily responsible for raising their two young sons, Edward and Michael. Paul says he is grateful that she was willing to support him as his career was taking off.

Kent State's School of Journalism and Mass Communication holds a special place in Paul's heart. "We were all family; we worked together and we played together. And we had a great darkroom, good photography equipment and professors who prepared us well." Paul said receiving the William Taylor Distinguished Alumni Award is a privilege. "I feel very fortunate to be included in the long line of professional journalists who have attended Kent State. Obviously, William Taylor set the standard, and to be in the same class with Fran Murphy and many others is a true honor."

For Paul, the future holds many new challenges, although he would like to continue working with and being a mentor to photojournalism students. And with a glimmer in his eyes and that famous smile, he adds: "I still feel that there's another Pulitzer in me someplace, somewhere." 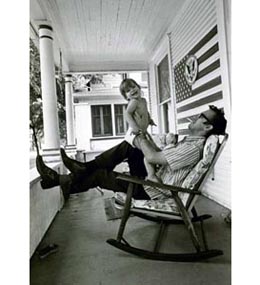