Comfortable, colorful, minimal and occasionally shocking, the clothes created by Rudi Gernreich were both experimental and representative of their times. Fascinated by a performance by Martha Graham he attended soon after his arrival in California, dance changed Rudi's concept of design, and unimpeded motion became the focus of his creed. Characterized by a simplicity of line, a love of strong saturated hues, and a daring sense of graphic design that used both the body and cloth as media, his work stood out and often overstepped sociological boundaries.

His infamous 1964 topless bathing suit became a symbol of controversy worldwide. Indicative of his lifetime advocacy for unisex garments, it was drawn from a boy's "Sunnette" style launched by Jantzen in 1931. Made of knitted wool, like the early 1950s swimsuits without foundations that were part of his early success, it was designed as a prediction of things to come at a time when many women on the Riviera had begun sunbathing without the tops of their bikinis. Retailers sold some 3,000 pieces, to the great surprise of the designer himself, who talked about merely designing for the needs of the new youth culture. He redefined notions of propriety throughout his career: he helped to popularize the miniskirt, designed see-through chiffon shirts and the "No Bra" bra at a time when the highly structured, padded, wired up-lift bra was the norm, proposed hairlessness and interchangeable clothing for both genders as the way of the future, and introduced the unisex thong. A bold thinker with a progressive appreciation of the human body, he was, and perhaps remains, ahead of the curve.

Rudi Gernreich's body of work has endured exceptionally well. He stood on the shoulders of Claire McCardell and Vera Maxwell to chart the future course of American sportswear design and free it from French rule. His work was thought-provoking and rooted in the emerging youth culture and art world. He looked to the street, not the elite, and produced reasonably priced, functional and joyful mass-produced informal garments. A Californian, he created activewear that bludgeoned onlookers with vibrating colors and patterns. A feminist, he sought equality for the sexes through his work and saw women as strong and uninhibited. He was a designer of great talent, a prophet and an activist. 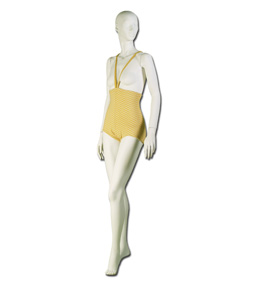