To celebrate The Kent State University Museum's fifteenth anniversary, we have elected to pay homage to an American original who has contributed in making our museum the one-of-a-kind institution it is. Who better to help us rejoice in style than Arnold Scaasi? With his passion for fashion, he has left his indelible, exuberant and glamorous mark on many American celebrations, from private family weddings to public presidential inaugural balls.

Born Arnold Isaacs in Montreal, he was exposed to the garment industry from an early age as the son of a furrier. At fourteen, he traveled to Australia to visit his Aunt Ida, a woman of style and substance, who helped him decide on a career in fashion. Upon his return to Montreal, Arnold studied at the Cotnoir-Capponi School of Design, which was affiliated with Paris' Chambre Syndicale de la Haute Couture Parisienne where he completed his formal design education. After an apprenticeship at the House of Paquin, he returned to America and obtained a position with designer Charles James in New York, where he worked for just over two years. James' sculptural gowns and demanding clientele helped to forge his skills as a creator and in public relations. A superb colorist whose designs aimed for maximum impact, he freelanced on numerous occasions and his clothes appeared in magazine ads for a wide variety of products in the early 1950s. While his creations were being used in a General Motors ad campaign, his friend Robert Denning reversed his name to give it a fashionable Italian flavor: Arnold Isaacs had become Scaasi!

It was with this catchy new name that Scaasi made the much-coveted cover of Vogue magazine in December 1955. The dramatic red evening coat featured on the Christmas issue was a forerunner of the numerous high-spirited and sculptural garments that were to become Scaasi trademarks. He opened his own ready-to-wear business in 1956 with a seamstress, a tailor, a small Manhattan studio, and $2000 in savings. Highly creative and hard working, he also proved himself to be a talented businessman. Just two years after his business debut, he won the prestigious Coty Fashion Critics Award in 1958 and, from then on, the great ladies of the era flocked to his door, from Jacqueline Bouvier Kennedy to the First Lady of the day, Mamie Eisenhower.

When social trends began to change in the 1960s, Arnold Scaasi went against the current and decided to change his business from a ready-to-wear to a made-to-order enterprise. In an era when even Parisian couture had to redefine itself, he closed on Seventh Avenue and opened his own couture salon in 1964. There, he catered to women who wanted luxurious clothes made to fit their bodies and lifestyles to perfection. His boundless creativity enabled him to design for a very eclectic clientele. From First Lady gowns for Lady Bird Johnson to Barbra Streisand's scandalously sheer 1969 Oscar overblouse and pants, Scaasi's name remained on everyone's lips.

His ready-to-wear label and mass availability reappeared with the affluence of the 1980s. Arnold Scaasi returned to Seventh Avenue in 1984 with a line called "Scaasi Boutique". This helped expand his sense of style beyond the socialites and entertainers such as Blaine and Ivana Trump, Princess Yasmin Aga Khan, Lauren Bacall, Diahann Carroll, Elizabeth Taylor and Mary Tyler Moore who were at the core of his couture clientele. His success triggered a series of licensing agreements, some of which had started in the 1950s, with furs, jewelry, accessories, fragrances, ties, bridalwear, sleepwear, and even QVC "dresses at a price". With great pride, he created for his existing client, First Lady Barbara Bush, her 1989 inaugural dress, which is now part of The Smithsonian Institution's collection. To add to the numerous awards he received over the years, including the 1987 award for Creative Excellence from the Council of Fashion Designers of America (CFDA), Mrs. Bush presented him in 1997 with the most prestigious accolade in the fashion world, the CFDA's Lifetime Achievement Award.

In the ephemeral world of fashion, Scaasi's sense of style, color and shape have endured. An art collector whose passion permeates his work, he knows what American women want and remembers their desire for fantasy. Although he has tried to take a step back to enjoy his success, his talent and energy push him to the forefront and, with First Lady Laura Bush enlisting him into her service, we can look forward to seeing more of his sumptuous creations. 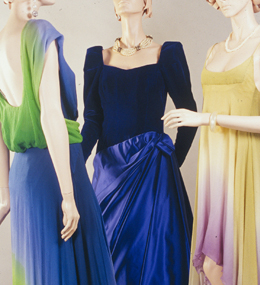