SLEUTHING AT THE SEAMS: A 1750S BLUE AND SILVER DRESS

On February 25, 1978, Shannon Rodgers purchased a "blue silk robe and petticoat brocaded in silver, English, 1750," from Cora Ginsburg Antique Textiles in New York City. At the time, the dress was configured in a style approximating the 1770s, although the textile was probably created around 1750. It was included in the original Silverman/Rodgers gift that established the Kent State University Museum. When I first saw the dress in 1993, I noticed machine stitching, something definitely not possible in the 18th century, and it piqued my curiosity about the history of the dress. I decided to try to discover whether or not the original shape and style of the dress might still exist under all the modern stitching. Once the sewing machine stitching and modern thread had been removed, the dress fell into 57 pieces. In 1995 I presented a description of the dress and a hypothesis on reconstruction at a symposium at Winterthur, but nothing more happened to the project until I showed the dress to my Honors History of Costume I class in 2003, and asked if anyone wanted a project. Kristina Hill volunteered, and chose to use her work on the dress as her Senior Honors Thesis.

We began to examine the dress during the summer of 2005. Christine Paulocik, Costume Conservator at the Costume Institute of the Metropolitan Museum of Art, tested a piece of the fabric to see if it could be wet cleaned before we proceeded to wash the pieces. Gary Harwood, Coordinator of Photography at Kent State, photographed a complete pattern repeat and we copied it until we had fifteen yards of xeroxed "fabric" so that we would have a guide for trying to find the original placement of the pieces. All summer we worked with the placement of the pieces as if they were a part of a large jigsaw puzzle. It became clear early on that my hypothesis presented at Winterthur was incorrect and that we were looking at quite a different dress. Once we had each piece placed on the pattern repeats we discovered that there were cuts across full fabric widths and all of the cuts were same length - just the right length to make an eight panel skirt in a mid-18th-century silhouette. Rita Brown, experienced in the restoration of 18th-century garments, consulted with us and encouraged us to continue. Kristina began to stitch the pieces onto sheer silk crepeline in the skirt lengths that we had found. We discovered missing sections that Kristina replicated using the industrial digital embroidery machine at The Fashion School with the help of Dr. Elizabeth Rhodes and Linda Öhrn-McDaniel. The digitizing process itself was an important learning experience. Kristina color coded each type of silver thread used in the brocade. This was sent to StitchInvaders, a digitizing firm in New Mexico. Fiber artist Janice Lessman-Moss, Professor of Art at Kent State, dyed new silk to blend with the old. Various embroidery threads were tested to see what would best blend with the old silver of the dress. There were mysteries, of course, and decisions to make regarding the final placement once the eight panels were assembled. We laid the panels out and discovered that there were two distinct pattern repeats that when alternated, created a serpentine pattern across the width of the skirt. As we placed the panels, we discovered crease lines that were consistent across the panels indicating that we had most probably discovered the original configuration. My curiosity about the dress and my desire to reconstruct it, were the direct result of my years working with Elizabeth Lawrence, then the Master Restorer at the Costume Institute. Liz had an intuitive approach to 18th-century garments that she called "sleuthing at the seams." She worked on dresses patiently for years, waiting until they "spoke" to her, looking for the evidence of former seams, former pleats, former "lives." It is the memory of Liz, her wisdom and her patience that have been very much a part of this undertaking. It is the very real, hard and patient work of Kristina Hill that has brought the project to fruition. 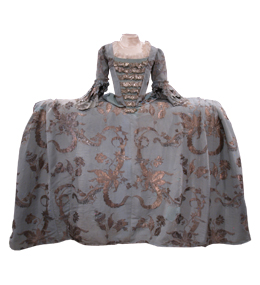