Curvilinear, pliable and changing while in motion, the human body is a never ending design challenge to individuals who aim to clothe it. To cover with cloth (a.k.a. clothing) has long meant the use of what is essentially a two-dimensional medium to cover a three-dimensional form. Draped on the body and held at strategic places, as seen in the Greek chiton or the Indian sari, or cut and assembled, cloth remains the most common medium used to produce a garment. When cloth is cut, most designers use a system of patterns based on orthogonal projections to fragment the body into flat planes. To achieve maximum use of the cloth, ease assembly and make the garments stronger, pattern pieces are usually applied on the grain of the fabric where the bulk of the motion will occur. The grain describes the sturdiest threads in the grid-like structure of the cloth that run the length of the fabric (warp), while the width threads (weft) are referred to as the cross-grain and are usually weaker. While most garments created with flat patterns tend to segment the body into front and back and limit expandability, a few designers have retained a vision of the body as a three-dimensional curvilinear life form and have drawn on spiraling and elliptical elements to achieve a different fit, ease or aesthetic.

Among the first and most important individuals to dwell on spiraling and elliptical concepts was Madeleine Vionnet (1876-1975), an as yet unsurpassed engineer in garment construction. Vionnet learned her trade from the ground up, entering the profession as a seamstress at age eleven. In time, she mastered sewing, cutting and draping techniques, became a première d'atelier at the House of Callot Soeurs in 1900 and, in 1907, was hired as modeliste (designer) at the House of Doucet at age thirty one. She eventually broke free from established practices when setting up her own couture house in Paris in 1912. By studying carefully her medium, cloth, and the ways fabrics of different fibers and weave structures could be draped, cut and sewn to achieve greater elasticity and fluidity, she pushed the boundaries of dressmaking. She also changed the world of fashion by reintegrating women's bodies-uncorseted and uninhibited-into garments that could move with them. One of the ways she achieved this feat was to place pattern pieces diagonally on the fabric's grid, technically known as the bias. As there are no supporting threads in this direction, only air, the fabric falls differently as the grid structure expands and contracts under strain or to conform to the body. An admirer of Greek pottery and geometry, Vionnet also instigated new ways of cutting: respecting the three-dimensionality of the body, she created new gowns by draping a half-scale figure on a swirling piano stool as a potter would his or her work. This naturally led to spiraling designs where the experienced eye can follow the diagonal direction of the grain around the body. Inspired by the golden section-the Greek law of proportion-and by Greek dress, she also created garments where decorative treatments and overall aesthetics reinterpreted Classical styles.

Madeleine Vionnet opened the way for others. Many disciples followed her lead both in her construction techniques and in her appreciation of the body in the round and in motion. Though her house of couture closed briefly during WWI and completely in 1939 at the onset of WWII, she left a lasting legacy of critical thought applied to dressmaking. 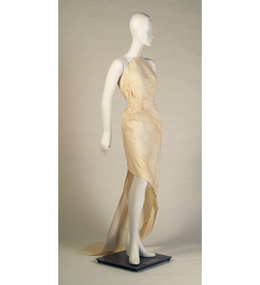