Through this exhibition of Greek costume from the Peloponnesian Folklore Foundation, the Kent State University Museum and members of the Greek community of Northeastern Ohio, we are pleased to present to the public indications of the many influences that helped to shape the wonderfully diverse, colorful and intricate patterns of Greek traditional dress.

Far from being conservative or unchanging, these costumes were a bold statement of one's individuality, age, social ties and beliefs.   Greek history is palpable in these garments which are the products of political ties and economic diversity and echo the powerful story of the nation.  The costumes presented here are primarily from the second half of the 19th century to 1945, a period of time that corresponds to the liberation of Greece from Turkish rule.  As modern Greece emerged from foreign domination, the migration of populations, foreign invasions, trade and the influence of Western European fashion all contributed to the evolution of Greek costume.

Each region, town or village developed specific types of costume with several variations, distinguished by dramatic color schemes, lavish ornamentation and numerous accessories.  The nature of the costume worn also depended upon local materials and trade.  There were essentially three types of costume: basic dress for daily wear, festive attire and bridal garments.   Politically driven fashions also developed, for example the National Guard uniform which was worn chiefly by the armotoloi and klephtes, the guerrillas of the Greek uprising against the Turks.  This uniform later was established as court dress by Otto, the first king of Greece and subsequently became synonymous with Greek national dress for the world at large.  We have entered an era where traditional costumes change minimally because they are no longer an integral element of daily life.  Now embraced as an important aspect of Greek heritage, these garments testify to the Mediterranean's colorful character.

This exhibition would not have been possible without the generous support of Mrs. Ioanna Papantoniou and the Peloponnesian Folklore Foundation in Nafplion, Greece.  We also would like to thank the Greek Ministry of Culture, the General Secretariat for Greeks Abroad, the Greek Ministry of Foreign Affairs, the Hellenic Preservation Society, and Serge and Yanna Hadji-Mihaloglou. 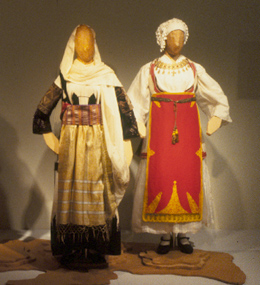