The exhibition features more than 130 pieces of pottery made by the Roseville, Weller, Rookwood, and McCoy ceramics companies in the Zanesville and Cincinnati area from the 1860s until the 1960s when the companies all had closed. It also features several pieces made by Canton ceramicist, Charles Clewell. The show is being presented with the support of the Ohio Arts Council and 89.7 WKSU.

The Paige Palmer Collection, which she donated to the Kent State University Museum in January, 2000, enhances the museum's holdings in decorative arts and provides valuable study for the School of Art, Department of History, interior design, crafts and ceramics. Ms. Palmer, a pioneer of televised exercise shows and international journalist, has just been selected for induction into the Ohio Women's Hall of Fame. An avid collector of world art, she became interested in collecting Ohio art pottery in the early 1950s while interviewing art and antique dealers on her weekly show. As a result, her collection includes rare and unusual examples of the pottery, now highly sought after on such auction sites as e-Bay.

"The incredible richness of southern Ohio clay helped propel Ohio pottery to the forefront of the ceramics industry, and is one of the reasons that Ohio Art Pottery has maintained its glaze and beauty for more than 100 years. Another is the sheer artistry of the industry and the remarkable decorators who took ideas from around the world and applied them to a popular art form, " stated Paige Palmer in a recent interview about her passion for Ohio Art Pottery.

Aside from important examples of such successful pottery lines as Rozane Royal, Pine Cone, Sunflower, Louwelsa, and Etna, the exhibition will also showcase works by Canton, Ohio ceramicist, Charles Clewell, believed to be the world's sole producer of "blue bronze", was a technician with the Timken Company who also created pottery featuring bronze over porcelain. In 1937, the French government awarded him the distinguished Diploma of the International Exposition of Arts and Techniques which he received in Paris. Because Clewell kept his pieces for himself rather than distribute or sell them, examples of them today are very rare. Included in Uncommon Clay are two of Clewell's bronzed works: a vase and mug created at the turn of the century. Unfortunately, not much is known about his process of ceramic art. As Clewell was oft quoted, "The art will likely die with me".

Uncommon Clay: Ohio Art Pottery from The Paige Palmer Collection reflects the dynamic historical forces that shaped the ceramics industry during the Arts and Crafts movement between 1870 and 1930. These include the onsurge of patriotism, women's suffrage, big business, interior design and the industrial revolution.

Ohio was the center of pottery production due to good waterways and an abundance of raw materials, Ohio's natural gas deposits in Zanesville combined with rich clay provided an ideal foundation for local potteries and gave Zanesville its nickname, "clay city". During its heyday, Ohio pottery establishments numbered 30. The products were sold in fine department stores and considered ideal gifts for weddings and other significant occasions. Ohio Art Pottery can be characterized as a close-knit industry of artists and potters who were given often switched allegiance, going to work for the competition. As a result, there are a lot of similarities in design and style among the many companies. This industry is also reflective of improved opportunities in the workplace for women, as the advent of modern inventions such as sewing machines and commercially prepared foods enabled women to pursue other activities including artistic professions.

Early on, decorators frequently signed their pieces, however later pieces were not signed. When sales of Ohio Art Pottery began to decline after World War II, companies went from expensive handcrafted artistic lines to more commercial lines such as oven-to-table ware. Despite the transition to basic housewares, most of the companies began to fold between 1919 and 1940, primarily due to declining markets after the depression, changes in management and financial problems. By 1967, all of the companies were out of business.

Roseville Pottery Co. was incorporated in 1892 in Roseville, Ohio. The firm began making stoneware jars, flower pots and cuspidors. in 1898, the company moved sixteen miles north to the former Clark Stoneware Plant in Zanesville, however, retaining its original name. For two years, the Roseville Company continued to produce stoneware specialties. Two other Zanesville ceramics factories, Weller, and Owens, were already prospering in the production of art pottery.

In 1900, Ross C. Purdy was hired to create the firm's first art line: Rozane, characterized by a thin glaze called "slip" blended in a brown background under clear glaze, then decorated by artists with wild flowers, animals and portraits. Later, the decoration was applied on light backgrounds. The name was eventually changed to Rozane Royal to distinguish it from other lines. The marks on these pieces show "R.P. Co." impressed on the bottom, sometimes with "Rozane" above it. In 1902, Frederick Horton Rhead, a member of an English family prominent in art and ceramics, came to the U.S. to work for a competing company, Weller. One of his techniques was forcing tiny threads of clay from a squeeze bag through a small opening to outline decorations. Soon after, he switched allegiance and was hired as art director for the Roseville Pottery Company where he continued to use the squeeze bag on Aztec and other Roseville lines. In 1905, the first Roseville Catalog was published, which today is very rare and difficult to find.

In 1906, Rhead introduced the Della Robbia line of 75 designs which showcased his technique of cutting away the background to reveal Greek, Persian and conventional decorating with overglaze

By 1908, all handcrafting was abandoned except for Roseville's prestigious line Rozane Royal. Roseville was the first pottery in Ohio to install a tunnel kiln which increased its production capacity. The glazes produced by this company was inexpensive yet conveyed to the onlooker a well designed, technically refined ceramic art piece. Floral motifs dominated most of the wares produced at Roseville, a trademark the company became known for throughout its life span. The Sunflower line revived in the 1930s was particularly successful during the Aesthetic movement. The secret of the company's success was its ability to produce hand decorated pieces along with commercial dinner wares and premiums for A & P Company.

After the depression, Roseville looked for a line to add business. The Pine Cone line in 75 different shapes and sizes was the most successful of all Roseville lines. They were made by the artist duo, Peters and Reed, who had been rejected by Weller.

The enduring nature of Rookwood Pottery survived two world wars and the lifespan of the Arts and Craft Movement while continuing to exhibit new lines, glaze techniques, and artistic excellence with entrepreneurial zeal. Rookwood was established in 1880 by Maria Nicholas, one of four recognized visionaries of art pottery during the Cincinnati women's art movement.

A major artistic accomplishment for Rookwood came in 1889 when the company was asked to exhibit wares at the Paris Exposition Universelle. The artistic influences that inspired was ethnically diverse ranging from Japanese china painting to Greek motifs. This varied design was entirely characteristic in Rookwood and other potteries of the time as they searched for identities in the art world.

Samuel A.Weller founded Weller Pottery in 1872. His main goal was to mass produce artistic pottery for the general public. Many of his earlier popular wares were high?glazed brown?shaded ceramics inspired by the Roseville line of Rozane which he renamed "Louwelsa" in 1918. The name came after a year long partnership with Lonhunda Pottery which moved the companies production facilities to Zanesville.

Weller ceramics were largely imitations of Roseville and Rookwood wares, mass produced. Weller's most successful lines came about between 1902 to 1906 during his association with Frederick H. Rhead, an affluent art pottery ceramist. The lines developed were Jap Birdimal and L'Art Nouveau. Another successful line was Etna, also in the exhibition.

Two of Weller's key designers were W. Myers and Hester Pillsbury. Examples of their signed pieces are in the exhibition. Weller was distinguished by frequent incorporation of farm animals and forests. 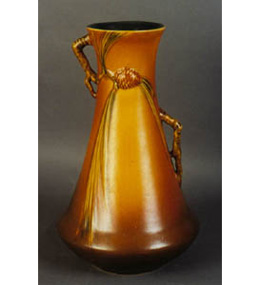