In August 1939, Madeleine Vionnet (1876-1975) presented her last collection in Paris before closing her house of couture. At the age of eleven, she had become a seamstress' apprentice and had discovered the gift of her hands. Talented, inquisitive and determined, she was a première d'atelier by age nineteen. The female body became the center of her art when she began developing garments through improvisational draping directly on models at the House of Callot Soeurs, which she entered in 1902. A modéliste (designer) at the House of Doucet in 1907, she was inspired by the dancer Isadora Duncan to create garments for uncorsetted bodies worn by barefoot models. Although hired to bring fresh ideas, her minimalism caused alarm. Her desire to purify clothing would not be indulged until she launched her own house in 1912 and revolutionized the world of fashion.

The House of Vionnet was reborn in 2007. The challenge this presented is the reason for our exhibition. How do you resurrect a firm created by a genius of garment engineering and one of the most gifted and original designer of the twentieth century? Very carefully. Times have changed and Madeleine Vionnet's structural and aesthetic revolution has now been internalized. Clothes that do not hinder the body but cling to it like a second skin no longer shock. Sixty-eight years after she retired, her work remains innovative, thoroughly modern and unsurpassed. Since 1991, the maze of Madame Vionnet's mind was brought to life through the research of Betty Kirke. The Vionnet paradox—simplicity and complexity combined—won the respect of a new generation. Beyond her study of the bias, the flexible yet unsubstantial diagonal direction on the fabric's grid, her skillful combination of geometry and anatomy as well as the unprecedented attention she paid her medium, cloth, led to countless discoveries that changed the fit, ease and motion of clothing. Vionnet's twenty-five years of experience and knowledge of all aspects of garment construction and design enabled her to break the very traditions she inherited. Seeing the body as a three-dimensional entity composed of geometrical shapes, she developed a system of cutting, tucking, pleating, twisting, wrapping, looping and tying the fabric to correspond to these shapes. Her concern for structure, balance and movement freed women's bodies and established a timeless ideal of beauty inspired by the golden section, the Ancient Greeks' law of proportion.

We present to you a selection of garments from the new Vionnet's first collection, Spring-Summer 2007, designed by Sophia Kokosalaki. Through her eyes we explore the legacy of Madeleine Vionnet. Through economy of means, a bodice is cut from a circle. Inspired by the rose, Kokosalaki gives a classic Vionnet design a new twist. Drawing from the beauty of various materials, garments are artfully draped, proving once more that wisdom, grace and elegance never go out of style. 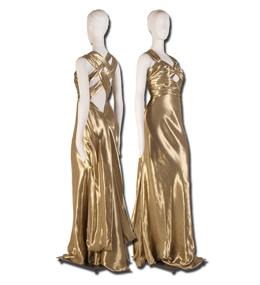