WRAPPED IN SPLENDOR: THE ART OF THE PAISLEY SHAWL

The exhibition surveys 19th century Indian and European shawls.  To highlight their intricate patterns, twenty-three shawls are displayed flat on easels.  An additional twenty shawls are draped on mannequins to show how these prized textiles were worn.  The exhibition traces the west's fascination with Kashmir shawls beginning in the late 18th century and demonstrates their use as both a practical outer garment and as a status symbol.  Cross-cultural influences between east and west are explained and the complexity of various methods of weaving is illustrated with close up photographs of the shawls on display.

Shawl weaving was a prestigious profession in India, and was reserved for men.  It was extremely  time consuming: two Indian weavers, sitting side by side at the loom, could take up to three years to produce a top quality shawl, the price of which might be equivalent to that of a house.  When western women started their love affair with these Indian imports, European weavers attempted to produce a similar product at a lesser price, a quest which resulted in the invention of the Jacquard loom.

In the first half of the 19th century, Europeans copied the designs of Indian shawls.  One of the towns where the shawls were produced was Paisley, Scotland, whose name became synonymous with both the shawls and the Asian teardrop or pinecone motif which decorated them.  By the mid 19th century, European aesthetics came to dominate the design of the paisley shawls, and Indian weavers were forced to imitate western patterns and to adapt their traditional weaving techniques to compete in and international market.  Paisley shawls fell from popularity in the 1870s, when the proved incompatible with the silhouette of the bustle. 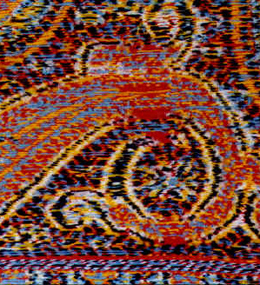 This event already has occurred.
KENT STATE UNIVERSITY MUSEUM
College of the Arts