The following is a first-person account from Eric Mansfield, a retired Army Major and Iraq Veteran, who serves as Assistant Vice President, Content Strategy & Communications for Kent State's Division of University Communications and Marketing.  He was recently invited to a Veterans Day breakfast with First Lady Dr. Jill Biden and Vice President Kamala Harris at the White House and was encouraged to share his experiences and photos with Kent State Today.

In many ways, I'm still coming to grips with the experience I had over this past weekend and all of the amazing people I had the honor of meeting. 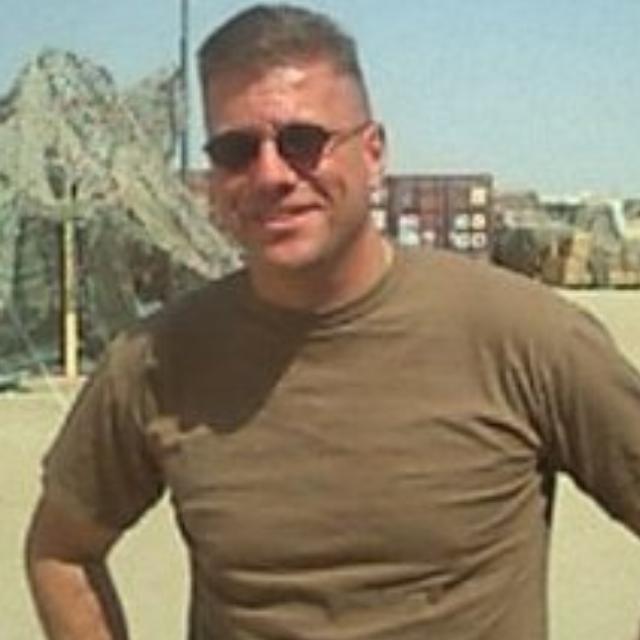 In fact, the word "honor" doesn't even feel strong enough for how I felt being in a room with Medal of Honor recipients, Purple Heart recipients and other combat veterans for a special Veterans Day breakfast hosted at the White House by First Lady Dr. Jill Biden.

While I had served in the U.S. Army and Army National Guard for 20 years, I had never been to the White House, but when the invitation arrived two weeks ago, I quickly agreed.

I hesitated briefly as I was scheduled to speak on Veterans Day at a ceremony in Cuyahoga Falls, but event organizers were quick to tell me to go and that they would have me speak at a future date.

I reported to Fort Myer, which is located next to Arlington National Cemetery, for a COVID test and security check, and then I was loaded up with the other select veterans for the short drive to the White House.

As we had quite a few veterans with wheelchairs and mobility issues, our buses pulled right up to the front door or the White House.

And just like that, I was inside the White House lobby being greeted by the staff over the beautiful sounds of a military orchestra. 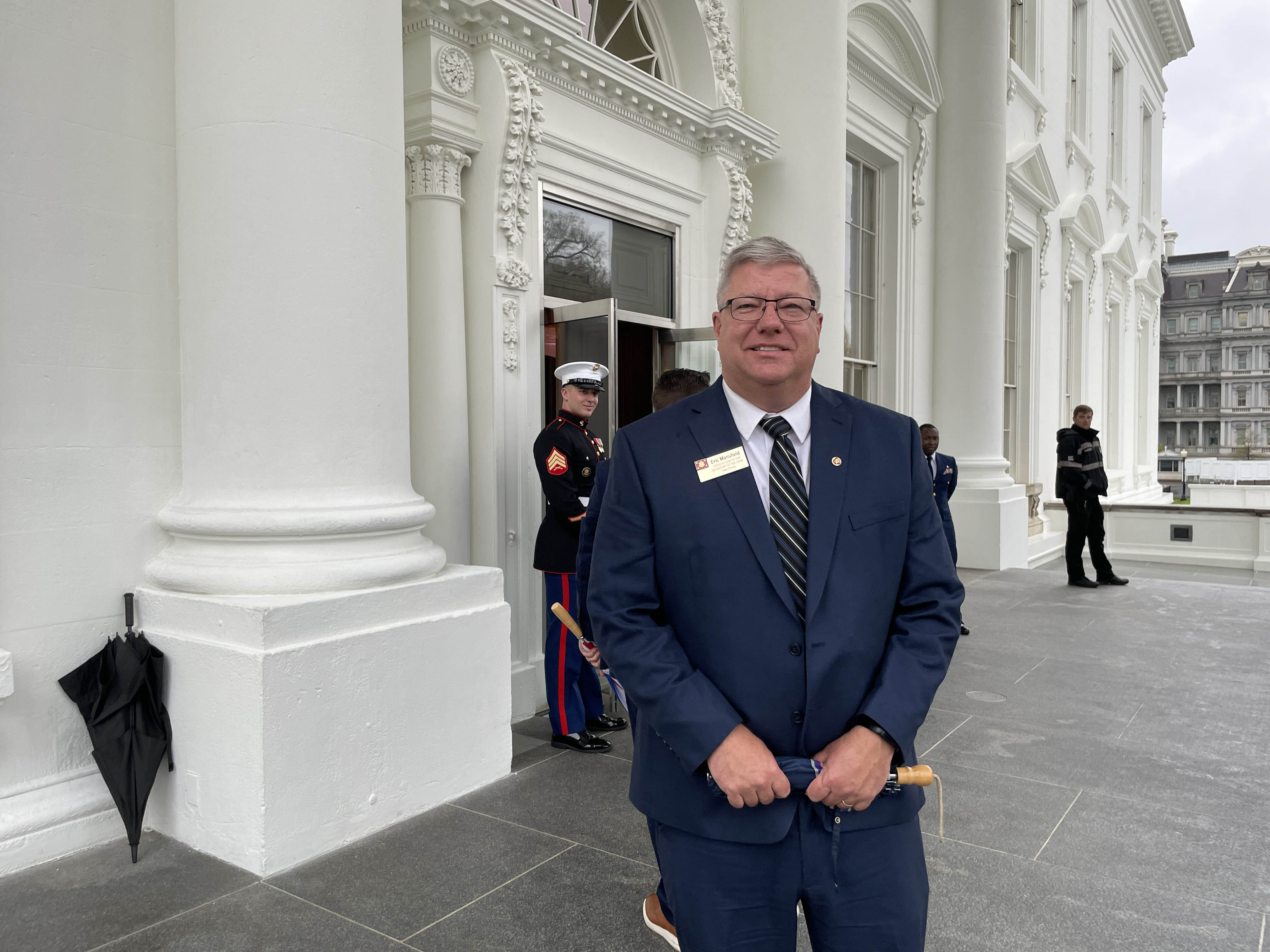 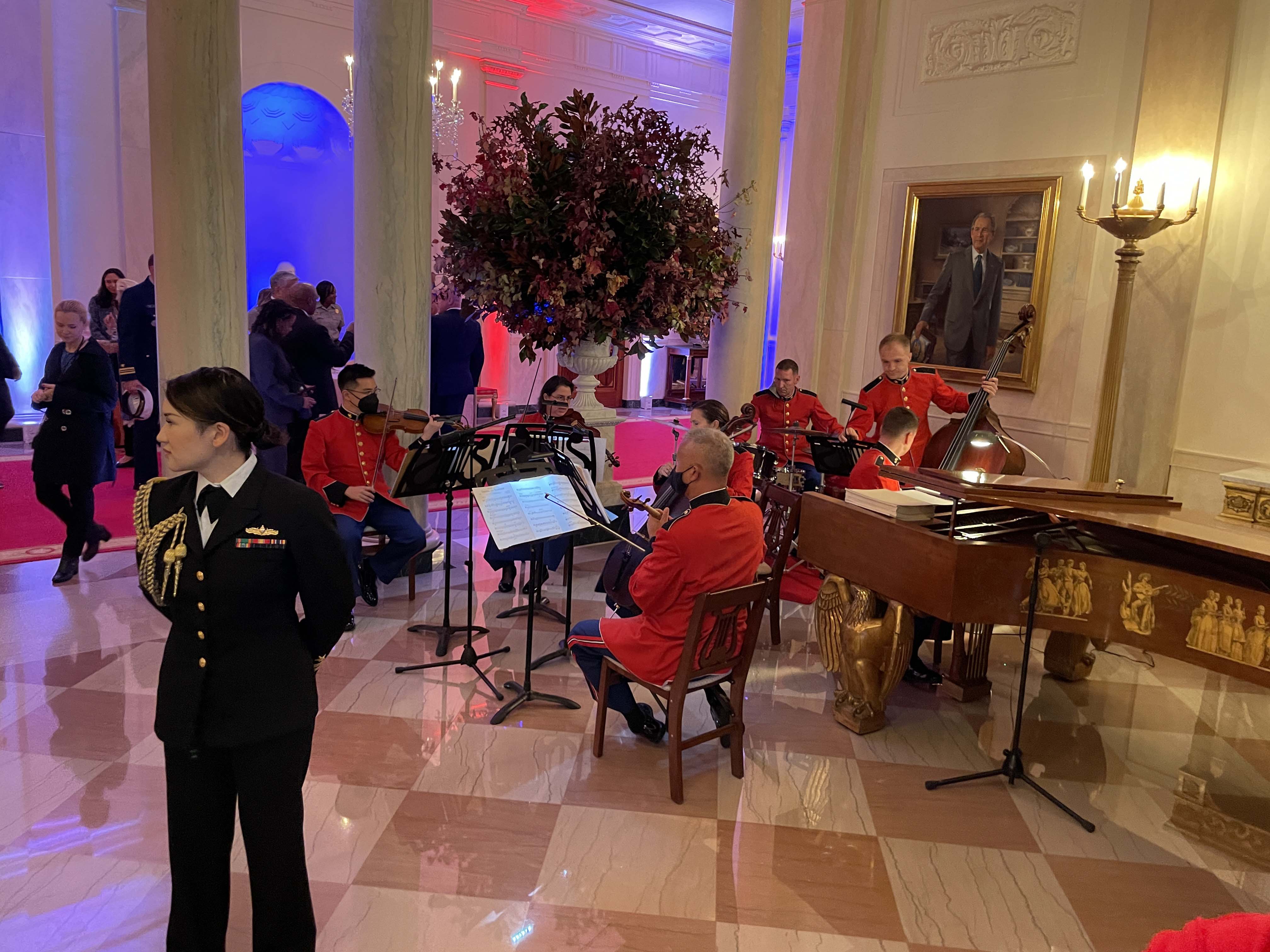 Each step inside the White House felt like a dream and I was quickly overtaken by the voice of my grandmother, Jeanne Mansfield, whose grandfather, father, husband, son and grandson (me) are all military veterans. In fact, my grandma was entertaining the WWII troops by singing in the USO when she met my grandfather at a dance. While she passed two years ago at the age of 100, I just know how amazingly proud she would have been to know her grandson was invited to breakfast at the White House.

Unlike those following a guide on a typical White House tour, we were free to mingle and move around at our own pace. I was guided to the State Room for an amazing breakfast buffet that I then took to the East Room for the breakfast itself. Those two rooms are on opposite sides of the same floor of the White House, and in between were so many of the presidential portraits I had only seen online. 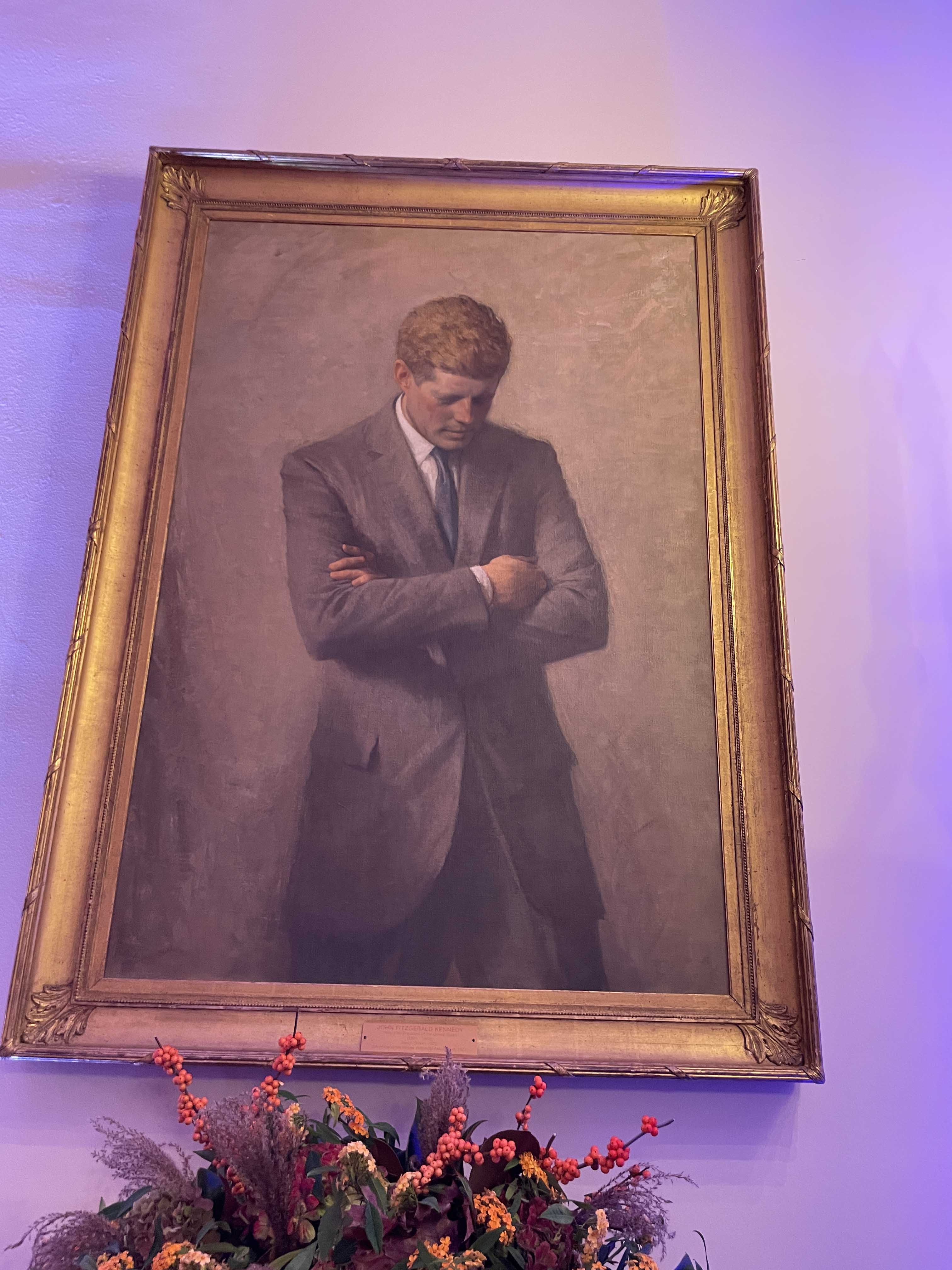 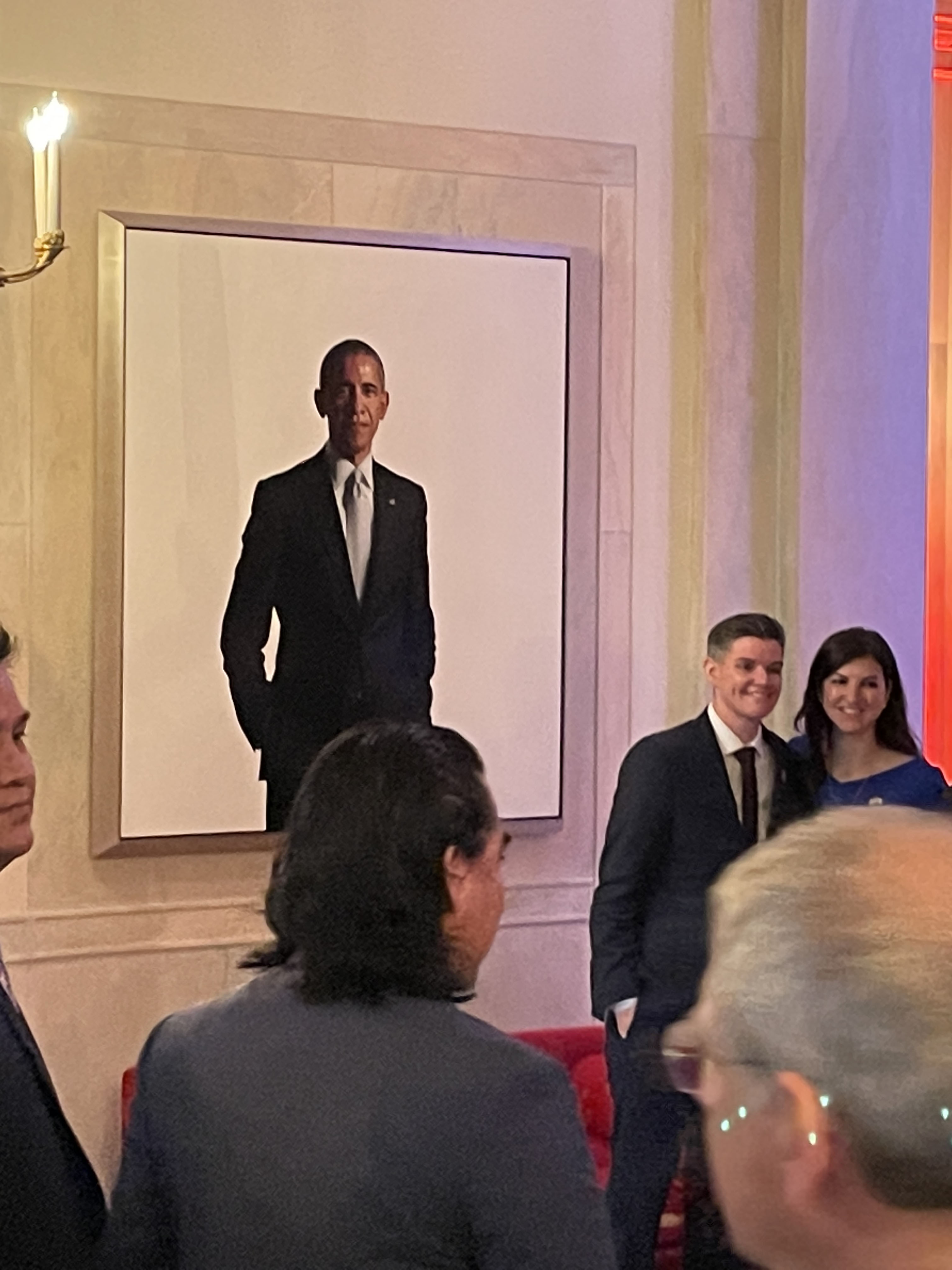 I was seated for breakfast next to a fellow Iraq veteran who now works in Washington for the Veterans Administration (VA). He had jumped into Iraq in late March, 2003, about two weeks before my unit arrived in the desert. So we both served in Iraq during the early days of the war.  Since he spoke Arabic, he said he was targeted by local insurgents and was eventually shot while in a vehicle about three months into his deployment. He was sent back to the United States to recover at Walter Reed Medical Center where he healed alongside Private Jessica Lynch, an Army soldier who became a household name at that time after she was captured and later rescued in Iraq.

Among those talking to the veterans at our tables were General Mark Milley, Chairman of the Joint Chiefs of Staff, and Pete Buttigieg, Secretary of Transportation and a veteran who served in Afghanistan.  Both were extremely pleasant to meet, and they treated me and all of the veterans with great compassion. 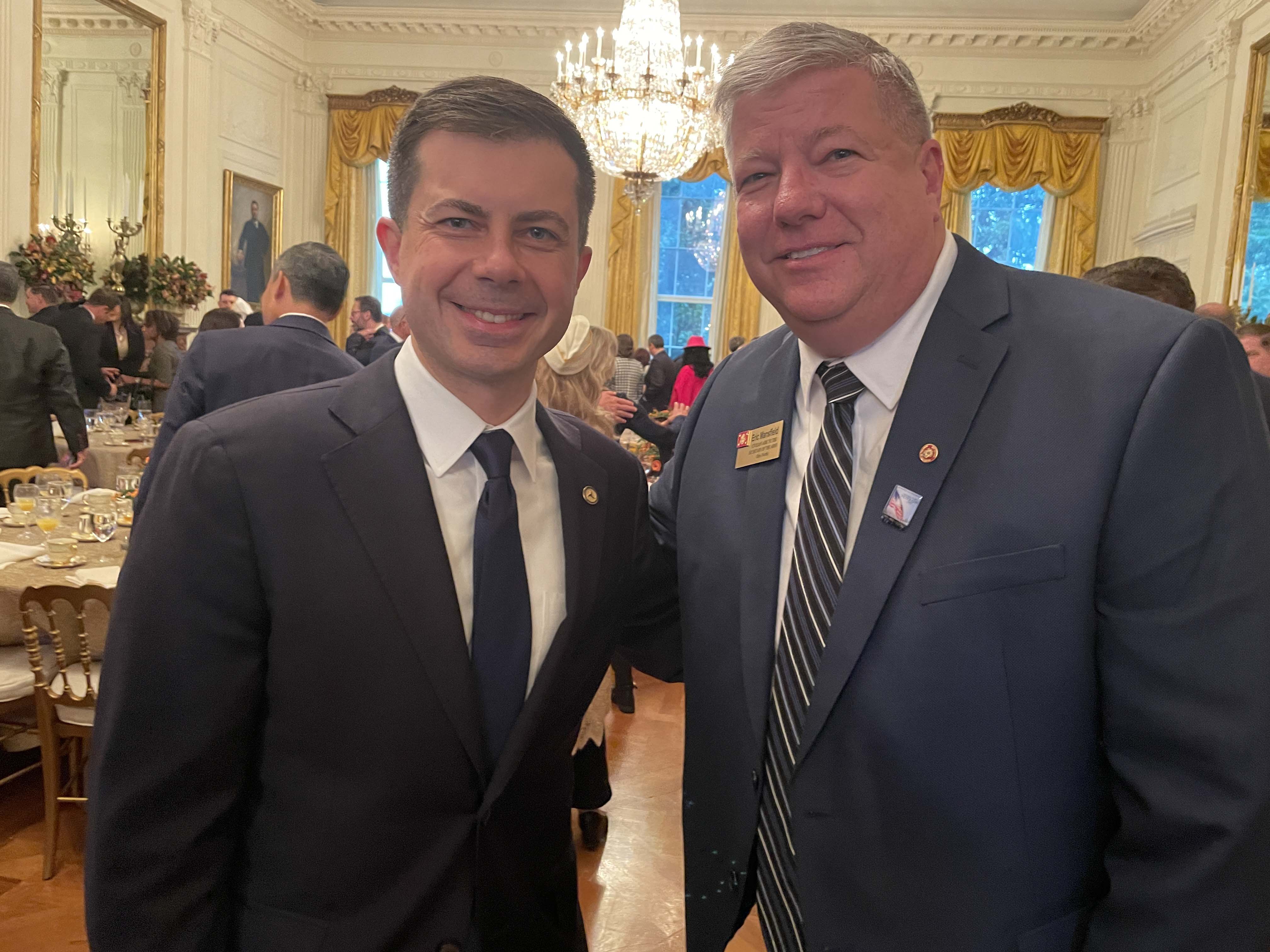 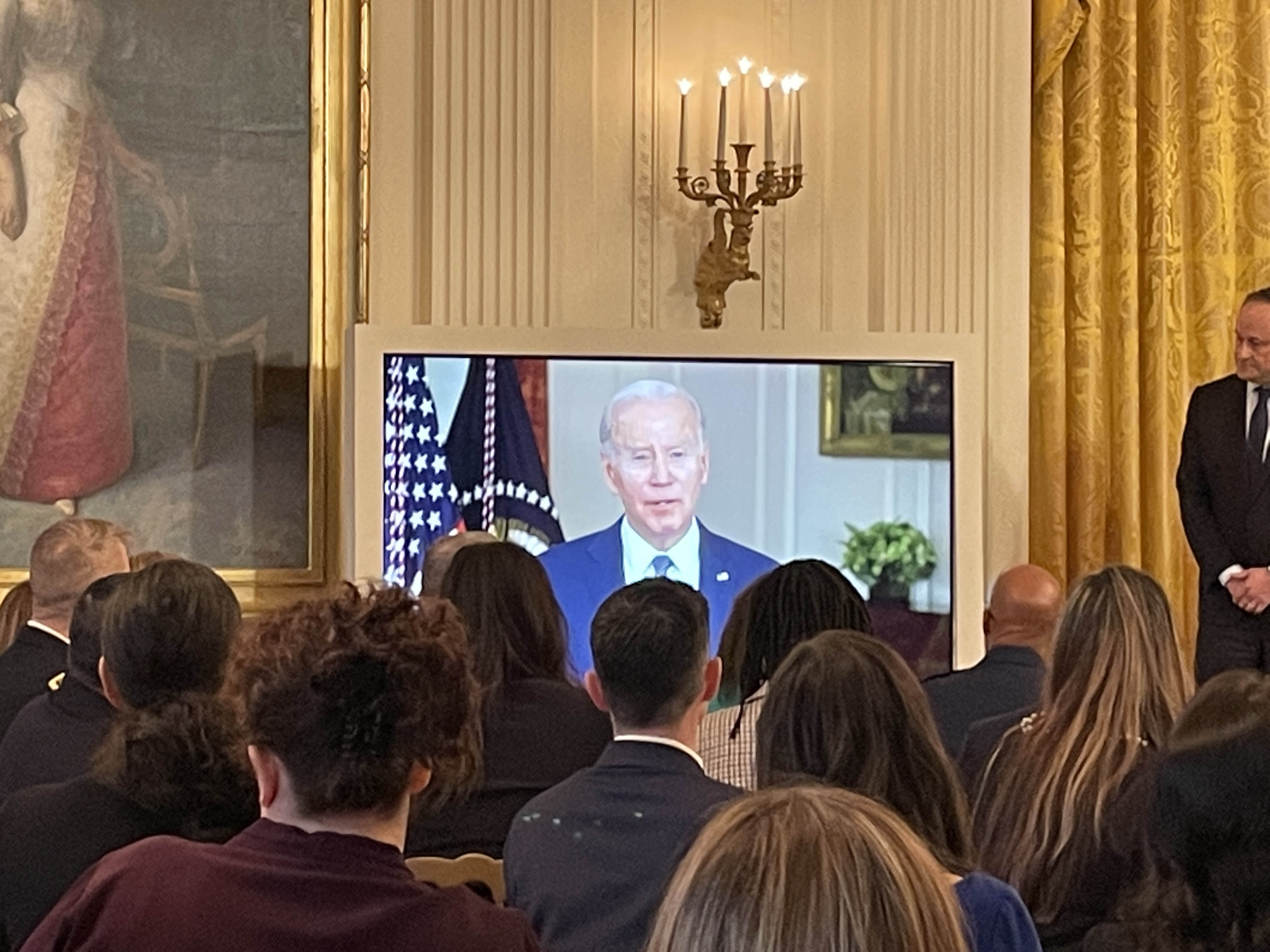 I met several World War II veterans along with veterans from Korea and Vietnam. Each shared amazing stories of their combat service and what their generations had endured. I learned a great deal, and there's something special about talking with fellow veterans, even those who are twice my age.

Our country's two most recent recipients of the Medal of Honor were also there. David Bellavia and Thomas P. Payne, a Sergeant Major still serving on active duty, were both very welcoming and easy to talk with over our breakfast gathering. I remain in awe of their heroism and dedication to our country. 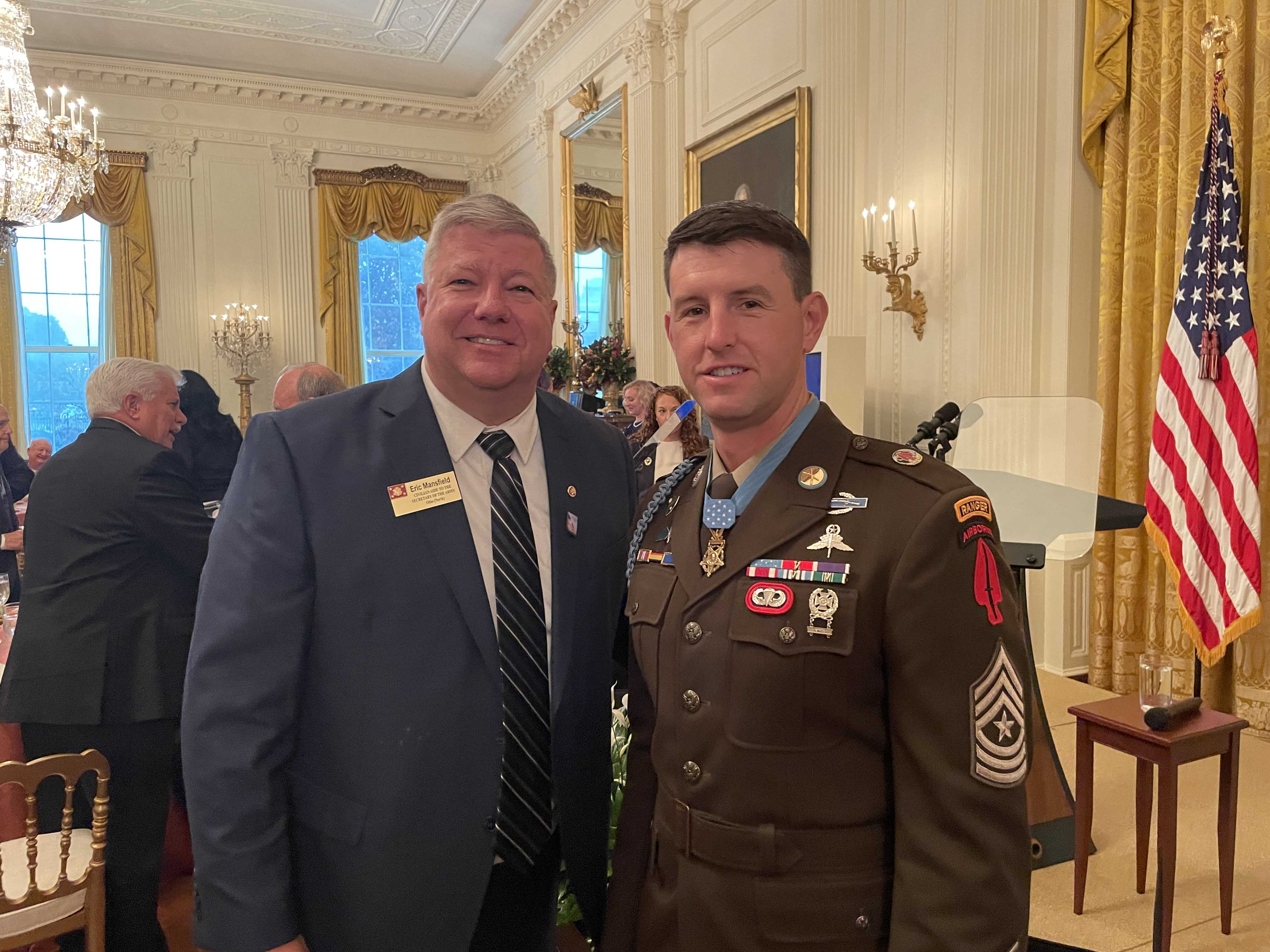 President Biden was overseas so he recorded a video welcoming all of us to the White House, and then the First Lady spoke on stage alongside Vice President Harris and Second Gentleman Douglas Emhoff.  Afterward, the three of them posed for photos with each of us at the breakfast. I joked that I felt very tall (I'm 6'3") standing in that group and the Vice President joked back that "you kinda are!"  The three were very nice to me and all of the veterans.

I wish I had had more time to share with the First Lady that I had met her husband 14 years ago during my time as a journalist, and we had had about a 30-minute conversation chatting about the Army ahead of his son's deployment to Iraq. He gave me his cell phone number as he got back on his campaign bus.

I wrote about that meeting several years ago in an essay on Medium, and I've since learned that Kent State alumna Brenna Parker, a former student of mine and who currently works on the Vice President's staff, had shared my military story and that article with the veterans' office at the White House, leading to my invitation to the breakfast. I'll never thank Brenna enough, and I hope she knows how proud all of us at Kent State are  as she continues to rise through the ranks as a professional communicator.

After breakfast, we traveled to Arlington National Cemetery as Vice President Harris posted a wreath and then spoke at the service. While it was pouring down rain, the honor guard was amazing and the ceremony, which was carried live on many cable networks, went quite smoothly.  Our group of honored veterans was positioned close to the wreath, and I was honored to see the moments play out. 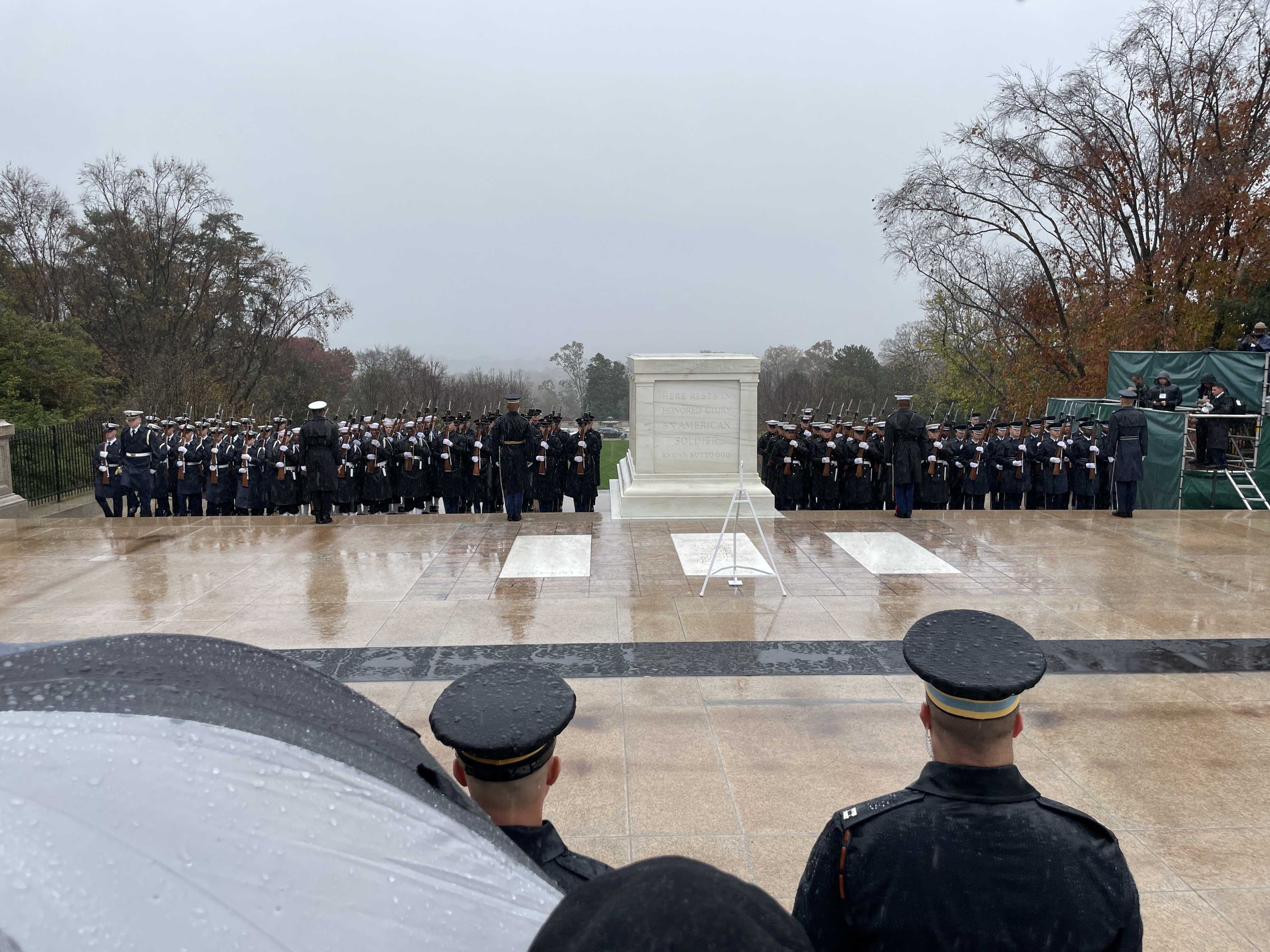 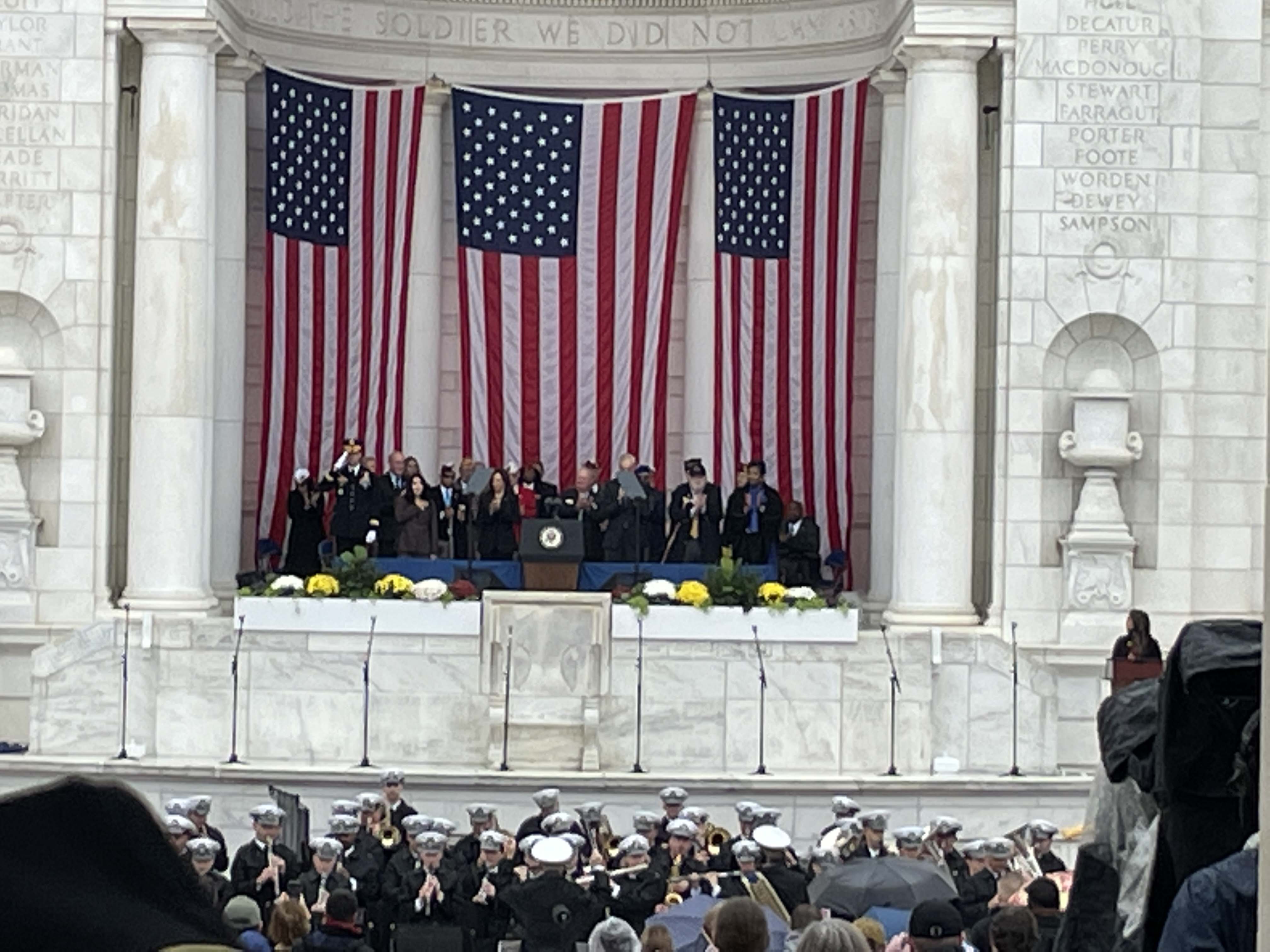 We were released a short time after the conclusion of the ceremony at Arlington.  I was still basking in the glow of the incredible morning as my wife, Lisa, and I visited the U.S. Army Museum, which opened two years ago just south of DC. It's so powerful and brings to life the journeys of soldiers and their families throughout our country's history.

I was also taken with the very first soldier's story you see coming into the lobby -- Ashley White Stumpf, a Kent State graduate who was killed in Afghanistan. 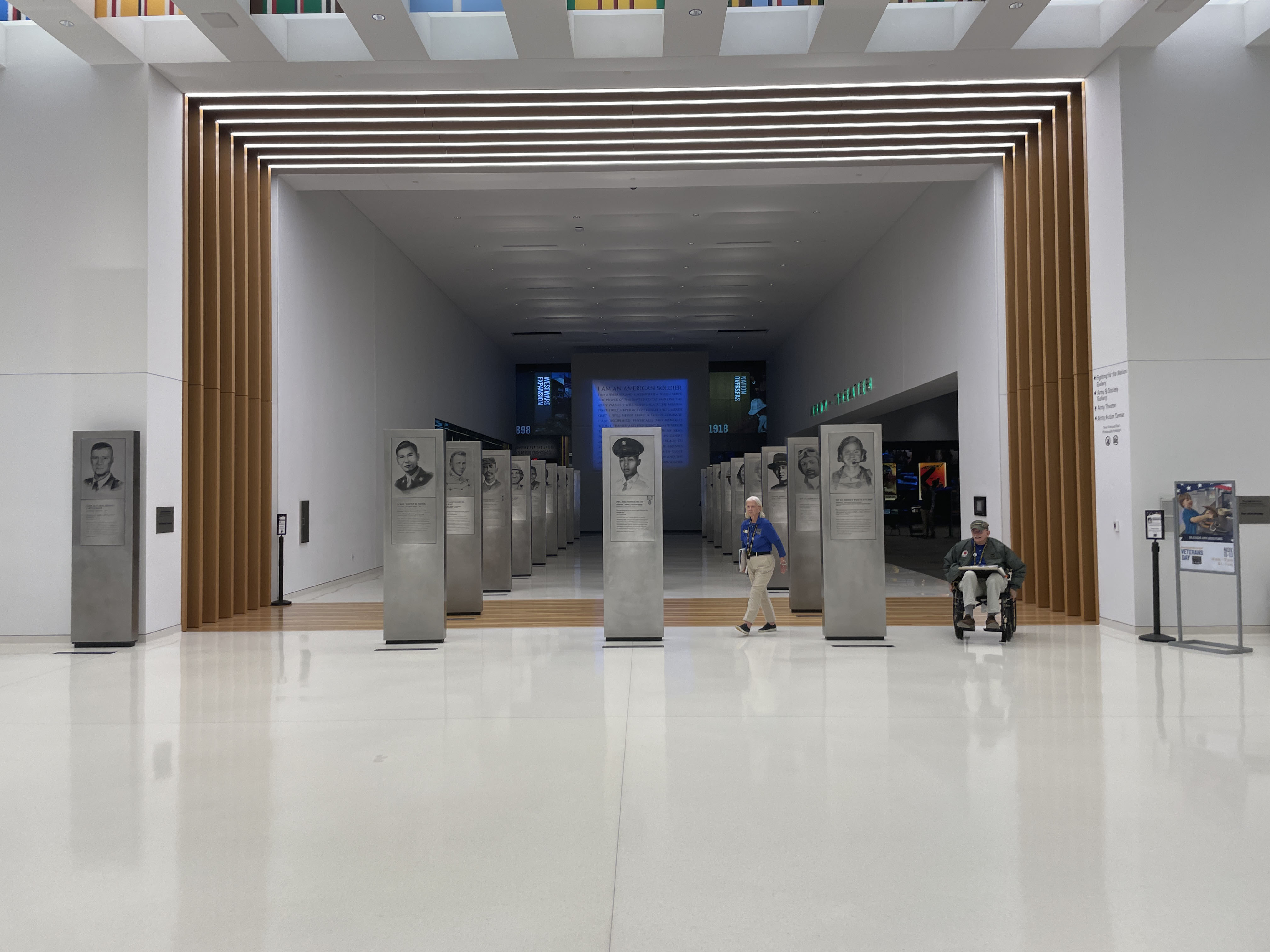 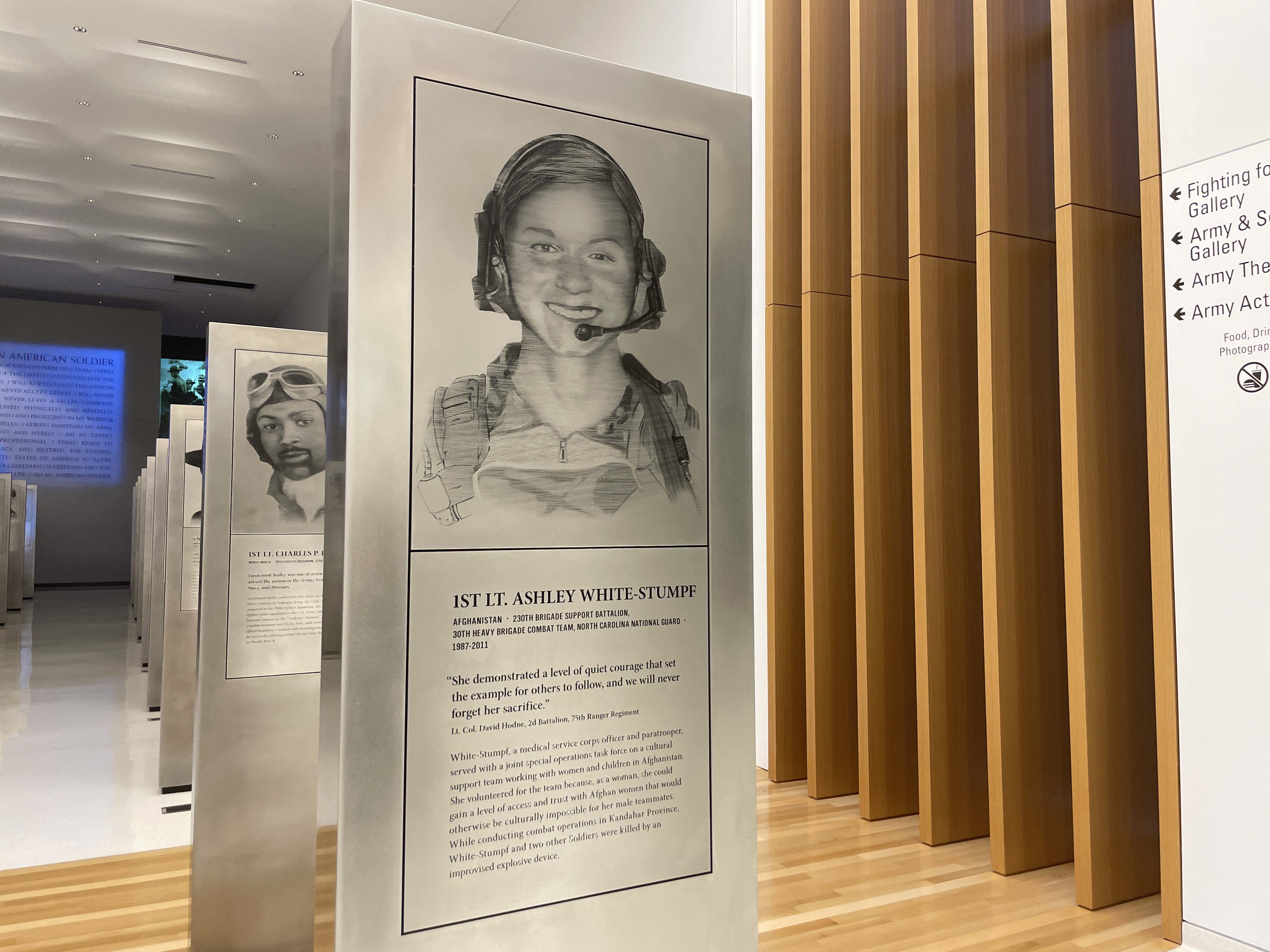 I teared up several times going through the experience of the aisles. As Lisa and I left the museum, we ran right into General Eric Shinseki, Former Secretary of the VA and Army Chief of Staff (google him; you'll recognize him) and LTG Roger Schultz, former director of the Army National Guard. These men are rock stars in the Army world, and they spent quite a bit of time chatting with Lisa and me about military service and honoring our veterans.

The next day included a personal tour of the West Wing and the Vice President's office in the Eisenhower Building. Brenna was an amazing guide as we saw it all -- the Oval Office, the Roosevelt Room, the press briefing room, and even the desk cubby where Nixon recorded the Watergate tapes. I'll probably most remember the Rose Garden and standing on the walkway between the White House and West Wing where so many historic photos and conversations have taken place. Oh, and I sat in the NBC News chair in the front row of the press room imagining what it's like when news is really happening.

I could go on and on about the visit, but I'll just say that I was so honored to be with the many other special veterans from around the country and to be reminded of the sacrifices they have made. I stopped to think about the soldiers who I served with but who did not make it home, specifically Mike Barkey, Dan Crabtree, and Charles Wilkins.

I am honored to continue to serve the Army, veterans and their families with my 2018 appointment as the Civilian Aide to the Secretary of the Army  (CASA) for Ohio (North). In my role as CASA, I work to open doors for Ohio recruiters as needed and to connect families, soldiers and veterans with resources to help them.

In the end, I felt like I entered the White House representing so many everyday heroes I served with during my time in the Army, and I gained a new appreciation for what it means to serve our country.