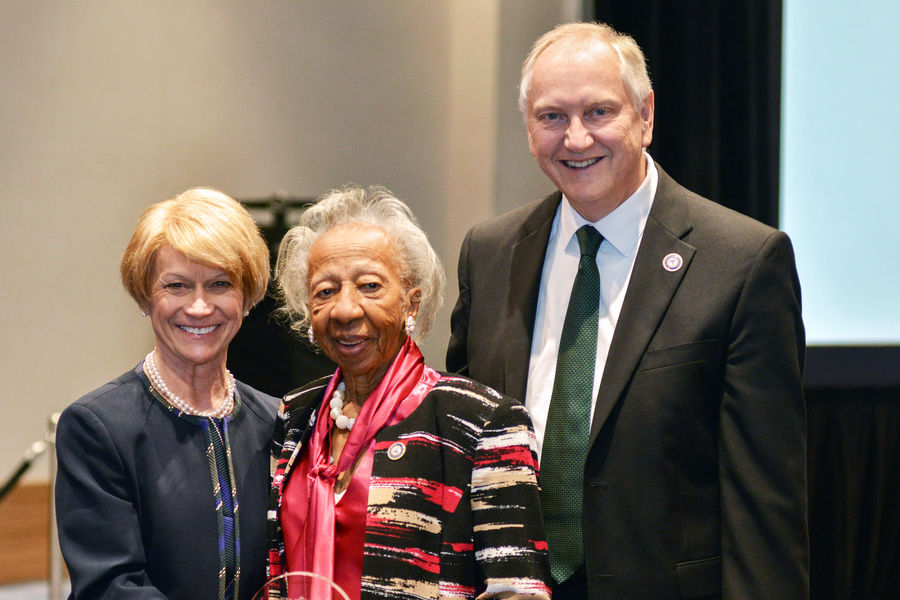 Dixon: A Lifetime Spent Blazing Trails for Minorities, Women and A Profession

On Sept. 7 of this year, Dr. Mildred K. Dixon, D.P.M., ’44, celebrated her 100th birthday. That same day, her alma mater, the Kent State University College of Podiatric Medicine (KSUCPM), celebrated its 100th anniversary. As with KSUCPM, Dixon’s history is impactful. At Kent State, we empower students to break the mold and shape the world. More than 70 years ago, Mildred Dixon was doing just that.

After graduating from dental nursing school, Dr. Dixon began working for Dr. Gilborn, a dentist in Montclair, N.J. He saw something special in Mildred, and encouraged her to continue her medical studies. Along the way, he also introduced her to a local podiatrist (at that time referred to as a chiropodist), Dr. Helen Hawthorn.  Hawthorn was a graduate of the Ohio College of Chiropody (O.C.C.), which is now KSUCPM. At the encouragement of Hawthorn, Mildred applied to O.C.C., and was accepted.

Mildred was a dedicated student, but times were tough as they are for many students even today. At one point she ran out of money and notified Dr. M.S. Harmolin, who at the time served as the O.C.C. dean of faculty and was also a member of the board of trustees.

”He told me not to worry about it,” Dixon said. “He set up a payment plan for me, and told me all I had to do was continue to concentrate on my studies.”

This support allowed Dixon to finish her education, and she graduated during the onset of World War II.

After graduation, she traveled a long road beginning with a trip south to Tuskegee, AL to visit friends. There she met her husband, James. O. Dixon, who was a faculty member at Tuskegee University. The marriage instantly made her part of a university community.

“The university family included many professionals from other parts of the U.S. and beyond, who had come to Tuskegee for the same reason,” Dixon said. “A shared vision to improve the life of Negroes.”

Mildred Dixon became instrumental in making this vision a reality.

Despite having passed the Alabama Board and obtaining her license, Dixon was unable to join the Alabama Association of Chiropodist (AAC) or the National Association of Chiropodists (NAC) (currently American Podiatric Medical Association). At the time, minority chiropodists were denied access to both organizations. As not only a woman, but an African-American woman in the post-war, Deep South during a time when segregation and discrimination ran rampant, it would have been easy for her to give up. Mildred Dixon did not give up.

Not willing to settle for denied access to the AAC, in 1949 Dixon petitioned the NAC’s headquarters in Washington D.C., and was given lifetime membership in the national organization, which allowed her to practice podiatry in the state of Alabama.

Mildred’s actions surely influenced an August 1965 historic milestone; an amendment was passed at the ACA convention, changing the bylaws to state that no person otherwise qualified for any classification of membership would be denied such membership for reasons of race, creed or national origin.

While working toward these equal rights, Dixon was also working toward building a remarkable career. In 1956, she was appointed as the first full-time female, African-American podiatrist at the Tuskegee Veterans Administration Hospital.  At the time of her employment, the Tuskegee V.A. was a teaching hospital, established for the care of more than 300,000 black veterans.

“Tuskegee was the place where the brightest blacks—male and female—were recruited for the Tuskegee V.A. Hospital, the John A. Andrew Memorial Hospital and Tuskegee University,” Dixon said. “It was there that I was encouraged to share my knowledge and dream of a future for my career.”

While with the Tuskegee V.A., Dixon created the first podiatric residency in the state of Alabama. Podiatry residents in the program were required to rotate with traditional medical school residents through various hospital departments.

“At the time many people, including some healthcare professionals, were unaware of the role of the podiatrist in patient care,” Dixon said. “The residency program not only assisted students, but also served as a public relations bureau for podiatry.”

Dixon finds it tremendously rewarding that, to this day, this residency program continues to thrive.

Remarkably, her contributions to her profession, to her gender, to minorities and to others didn’t stop there.

When Dixon attended podiatry school, the cost was approximately $2,000 per year. Today, tuition is more than $35,000 per year, with few podiatry scholarships available to help students defer costs. Dixon remembered the support she received as a student and knew she wanted to help others in a similar way.

“When I decided to create an endowment there was never a question of where,” Dixon said. “It was simply a matter of when.”

In April 2016, to honor all Dr. Dixon has accomplished, she and her daughter, Denise Dixon, created The Dr. Mildred Dixon Endowed Scholarship for Podiatric Medicine.

“Giving back to your alma mater can help a student gain a valuable asset: an education,” Dixon said. “It can also play a role in determining the future and continuation of the program and the university.”

Dixon hopes this scholarship will not only help defray some of the costs for deserving podiatry students and help support KSUCPM, but that it also helps remind each recipient of the journey of the podiatric profession, which continues to be a passion for her.

“Podiatry can provide a rewarding career,” Dixon said. “The importance of physical fitness today places emphasis on activities and exercises that depend on our feet. Feet are often ignored or taken for granted, when they are one of the most important parts of our body.”

Dixon is a long-time supporter of KSUCPM, and was inducted into KSUCPM Hall of Fame in 2008. She now lives with her daughter and remains a valued, well-respected member of the Tuskegee community; she knows everyone, and everyone seems to know her as well. Dixon is still very sharp, and continues to volunteer one day each week at the National Park Services, Historic George Washington Carver Museum, Tuskegee Institute. She is currently the oldest National Park Services volunteer.

At 100 years old, Dixon’s story still doesn’t end here, and she has made sure it never will. Through her endowment, she has ensured her story of student encouragement and support will continue in perpetuity.

To support The Dr. Mildred Dixon Endowed Scholarship for Podiatric Medicine, visit the endowment’s donation page. Or, for information about other ways you can help transform the lives of Kent State students, visit our Ways to Give page.

(Pictured at left: Kent State University President, Beverly Warren, Dr. Mildred K. Dixon, and Dr. Allan Boike, dean of the KSUCPM. Dr. Dixon was presented with the Centennial Award during the Sept. 7, 2016 KSUCPM 100th Anniversary Celebration.The award was given in recognition of her many years of service to the field of podiatric medicine, and her incredible support of KSUCPM.)