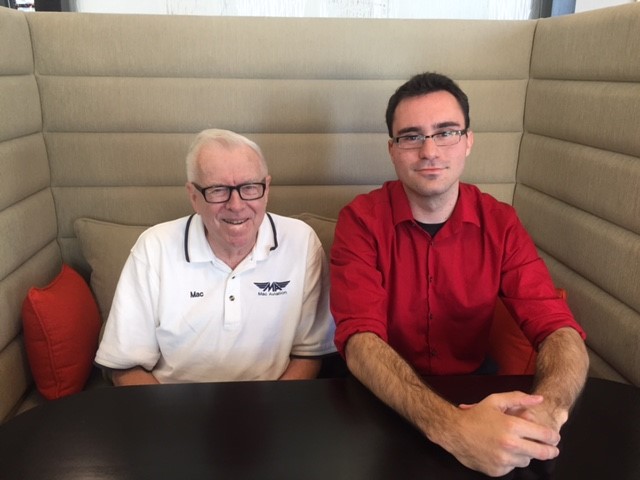 Lellan “Mac” McFarland has had a love affair with airplanes and aviation for most of his life. He joined the Air Force right after high school in 1955, and served as a crew chief on F-86 Sabre jets for four years, before joining Warner Swazey as a machinist. Over many subsequent years, Mac went on to college and earned a B.S. in aeronautical engineering, an M.S. in mechanical engineering and eventually, an M.B.A from Kent State in 1980.

Brendan Evans, a sophomore aerospace engineering student at Kent State, grew up hearing about his dad’s experiences as an aviation electrician in the Navy.

“My dad worked on F-14 Tomcats,” says Brendan. “He always told me to join the Air Force when I grew up because they had the best food and facilities on their bases.”

“David was always interested in airplanes and cars, which, of course, he got from his dad,” says Mac. “He joined the Marines and was a plane captain on the A-6 Intruder, and also served in Desert Storm. When he got out, he got his A&P license (an Airframe and Power Plant license that allows you to work on aircraft) and went to work at several local maintenance facilities.”

According to Mac, “David knew everything about aviation, he grew up around it and just loved it. That’s what made me decide to fund the scholarship at Kent State.” He’s also very pleased that Brendan is his scholarship recipient.

Adds Brenden, “I’m trying to get through all four years of college without taking out loans. This scholarship really helps me out a lot.”

When Brendan graduates, he’ll be commissioned as a second lieutenant in the Air Force, working as a Combat System Officer (which includes navigation, weapons systems and electronic warfare). He also hopes to be able to join the pilot program one day.

“I’m taking a lot of math and physics classes right now, but I’m having the most fun in ROTC,” Brendan says. “I’m also working on a team project to build a vertical takeoff drone for competition. I’m fascinated by anything that has an engine – how to design it, how to make it work.”

Mac, on the other hand, is spending his “retirement” as treasurer at the MAPS Air Museum in North Canton. He recently was able to ride in and fly a vintage World War II P-51 Mustang, one of the fastest fighter/bombers of its time (with a top speed of 437 mph). The pilot let Mac do some loops and rolls in the aircraft.

“The plane was easier to fly than the Cessna I learned in,” he says. “My logbook lists the horsepower of each of the planes I fly. The guy wrote in ‘Horsepower 1500’ next to the entry for that flight. It looked so cool in the logbook! And I’ll be grinning from ear to ear for the next six months.”

In addition to his scholarship, which Mac’s former employer matches at a rate of three dollars for every dollar Mac donates, he has also designated Kent State in his estate plans. So aviation students like Brendan, who is working very hard to avoid going into debt for his education, will benefit from Mac’s generosity for many years to come.

If you’d like to learn how easy it is to endow a scholarship or make Kent State a part of your estate plans, just contact Institutional Advancement at 330-672-2222 or advancement@kent.edu, or the Center for Gift and Estate Planning at 672-1000 or giftplan@kent.edu.