Growing up in Cleveland, sisters Sally, Nancy, Cathy and Phyllis were encouraged to “speak” the language of music by their mother, who was an accompanist and singer for the Polish Club Chorus. She gave her daughters lessons in the hope of passing on to them a passion for music. Nancy, who was able to play the piano by ear, sing and compose, was the only sister to live a life of music and become fluent in the language.

Sally herself received a scholarship to attend Kent State, and later, Nancy followed and they became roommates. Nancy studied piano for a year before leaving to play in clubs under the stage name, Amber Keys. After meeting her husband, Nancy stayed home to raise her two children, and she became a private piano instructor. In 2002 at the age of 62, Nancy was taken by cancer. But until the end, music continued to be a constant passion in her life; a language she, like her mother before her, continued to pass on. At the time of her death, Nancy still had 52 piano students.

To honor her sister’s memory and support Kent State University students, Sally Cahur, ’57, established the Nancy Samhric Scholarship in Music. This scholarship is intended for students majoring in music education or music performance, with a preference for piano; students who, like Nancy and her mother before her, have a passion for music.

“Setting up a scholarship to help someone get a good education is such a valuable aid,” Sally said. “Nancy and I were part of a working class family. Our dad was a steel worker, mom was a secretary and they had four daughters. I think we learned to appreciate at a young age that sharing with others is important. It's a long, hard road to graduate from college and follow your dreams, with many challenges to make it happen. I hope this scholarship helps.”

Sally graduated from Kent State with a degree in journalism, then went on to earn a master’s degree from Syracuse University. Working in public relations at Metropolitan Life, Western Union, RCA and HBO, Sally also worked at Columbia University as the managing editor of the Teacher’s College Record. Later, she moved on to a copy writer position with IEEE Spectrum, from which she retired in 2007. Today, still in New York City, Sally uses her journalistic skills volunteering at Catholic Charities NYC, where she helps write resumes for refugees.

Nancy and Sally’s sister, Cathy (who has been a Sister of Charity of Cincinnati for 60 years), boasted that in the 11 years Sally has been with Catholic Charities, she has created more than 800 resumes.

Recently, Sally and Cathy were able to take in a lunch to celebrate Cathy’s 80th birthday and meet with the most recent Nancy Samhric Scholarship recipient, Ryan Miles. 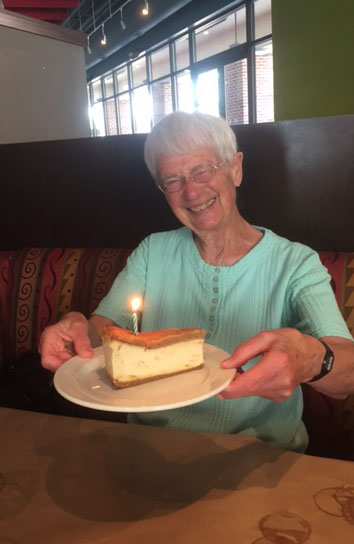 Ryan, a 4.0 GPA junior majoring in piano performance with a minor in music technology, is a classically-trained pianist who also plays jazz, and like Nancy, also sings and composes. Born and raised in Alliance, Ohio, Ryan’s dream is to work in the music production and recording industry. His short-term goal is to pursue a minor in music technology and a master’s in piano performance.

“One of the things we appreciate about Ryan is that he’s shown a lot of growth,” said Professor Wong.

Ryan was glad to meet his donor and have a personal interaction with her, and expressed much gratitude for her support.

“This scholarship allows me to take advantage of opportunities, such as a minor in music technology,” Ryan said, “with less time spent worrying about expenses.”

“Every year Nancy had a recital at a local church or school and featured her students in solo performances, from five years to 40 years old,” Sally said. “The audience was filled with parents and friends, who were so proud of their performer. And the students, of course, loved their teacher and wanted her to be proud of them … And she always was.”

Nancy most certainly would appreciate Ryan’s talent and passion, support his dreams and be proud of his accomplishments. Through this scholarship, in way, she is able to continue to do so.