David and Janet Dix, ’71, MEd, ’76, PhD, ’92, have been longtime supporters of Kent State University and have each served on various university boards.

An alumnus of Oberlin College, David holds a master’s degree in journalism from Syracuse University, and a law degree from the University of Akron; Janet earned a bachelor’s degree, a Master of Education degree, and doctorate in counseling and psychology, all from Kent State. 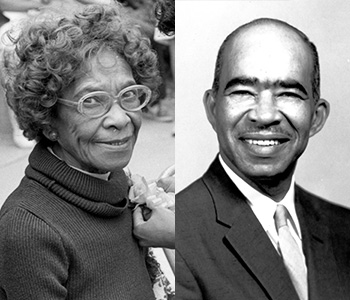 David spent his career in media at Dix Communications, Inc., a fifth-generation family-owned company that began in 1893. As a principal owner, David was also publisher of a number of its newspapers. In January 2017, Gatehouse Media acquired Dix Communications.

David recently authored this essay that recounts his first encounter with Mrs. Oscar Ritchie, wife of Oscar Ritchie, a Kent State professor and the first African American to serve on the faculty of any predominantly white university in Ohio.

We express our gratitude to David for sharing this memory and to David and Janet for their generous donation to create the Oscar Ritchie Endowed Lecture Series Fund housed in the Department of Africana Studies. This fund is used to advance and promote the field of Africana Studies by providing financial support for operational and logistical expenses for the lecture series.

In the summer of 1956, between my freshman and sophomore years at Kent State University School, a laboratory K through 12 school to train future teachers, I worked for my father, Robert C. Dix, publisher of the Record-Courier, the local newspaper and whose family owned several newspapers in Ohio and Kentucky and who served on the Kent State University Board of Trustees for 32 years.

My job consisted of going door-to-door to homes in Kent to sell subscriptions to those who did not take the newspaper. In those days, more women were stay-at-homes than in the workforce and most answered my knocks on their doors and listened to my short sales pitch, either signing up to subscribe or politely telling me, “No thanks.”

One woman, after I introduced myself and explained my mission, became pretty angry and started telling me how unfairly segregated Kent was as a community, that her husband was a professor at Kent State and that the homes they were able to buy were limited to one certain neighborhood. The bigotry within the community was appalling, she said.

A white clueless teenager, who led a sheltered life, and unaware of restrictive covenants that kept people out of many Kent neighborhoods, I listened to the lady express her anger. She eventually had her say and grew quieter. Then, I had the temerity to ask if she would like to subscribe.

That fired her anger up once more. She glared at me, evidently wondering if I had understood anything she had said, gave me a firm, “NO!,” and closed her door.

I went on to other homes and made my subscription pitch at them, but never forgot the woman’s anger and several years later realized I had been talking with Mrs. Oscar Ritchie, the wife of Kent State University’s first African American professor.

That memory came roaring back this past year as I watched the “Black Lives Matter” movement grow and express its anger following the death by strangulation by a policeman of George Floyd in Minneapolis. I remember well the Civil Rights Movement in the 1960s, which was an educational experience for me. Over the years, I had read some and talked with people who knew first-hand the double standard for African Americans. Approaching my 80th birthday, I have a better, if unperfect, sense of the frustration and despair African Americans feel as they seek a more equal footing with white Americans in their quest for their share of the American dream.

Wanting to make a positive contribution to this issue, my long ago encounter with Mrs. Oscar Ritchie came to mind. I thought maybe financially supporting a lecture in the Kent State University Pan African Studies program might be helpful. I wrote to the Kent State University Foundation about this idea explaining that the lecturer invited to Kent State should be an African American who had made a significant contribution to the arts and sciences. I know from personal experience that positive role models inspired me as a young man coming into adulthood. Young African American men and women are no different. Positive role models with whom young African American men and women can identify, can have a similar, positive effect.

The Foundation expressed interest in the idea and the concept of the Oscar Ritchie Memorial Lecture Series began to take shape.