Christian Cunningham, senior aeronautical studies major at Kent State University, has been doubted. Some said he would never become a pilot. But Cunningham is already proving them wrong. Graduation is on the horizon, and he and his internship were recently featured on CNN.

“People would always say I couldn’t do it because I had glasses, or 'there’s not a lot of black pilots,’” Cunningham said. 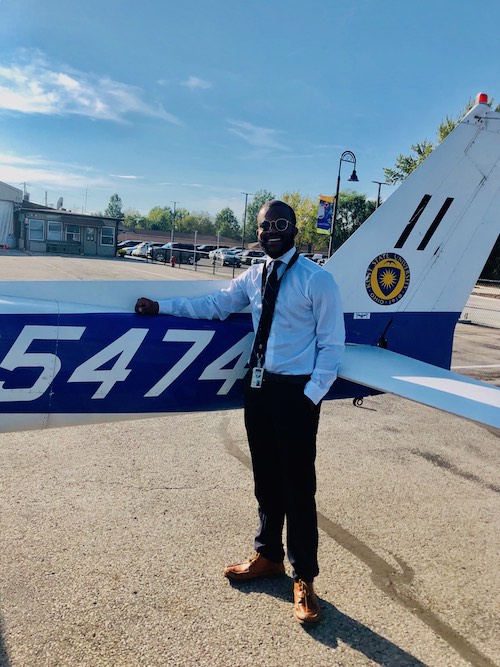 Cunningham, expected to graduate in December, is currently interning at Fly For The Culture, an organization that promotes diversity and inclusion in aviation. Both Cunningham and the organization were featured in a CNN article this fall titled “The pilots changing the face of aviation.”

As an intern at Fly For The Culture, Cunningham runs the organization’s social media, as well as interviews and showcases diverse pioneers in aviation. He found out about the organization his freshman year when his father sent him a link to its Facebook page.

“I followed them for about a year and reached out to Courtland, the founder,” Cunningham said “I wanted to start a chapter here at Kent State or anything to get involved.”

“Christian brought great ideas to our social media like ‘Aviator of the Week,’” Savage said. “I was really proud that for Black History Month he would post black aviation history facts every day.”

Cunningham described his experience with Fly For The Culture as “one-of-a-kind.”

“Christian really impressed me with the level of positivity he brought to his internship position,” Maureen McFarland, Ph.D., associate dean of Academic Affairs and College of Aeronautics and Engineering said. “Through reading his bi-weekly reflection journals, it became obvious he used every possible opportunity to grow and learn about diversity and inclusion in the aviation industry.”

Cunningham said he chose to attend Kent State because of the aeronautics program and scholarship opportunities the university offers.

“The flight instructors really know what they are talking about,” Cunningham said. “At the end of the day, they’re going to make sure you are ready for where you want to go.”

After graduation, Cunningham will attend the Leadership In Flight Training (LIFT) Academy to finish his training, and he will have a guaranteed interview with a respected airline when he finishes. LIFT Academy is a program owned by Republic Airways.

Cunningham encourages students interested in flying to do their research and persevere through training.

“Everybody’s flight training is on a different timeline,” Cunningham said. “Don’t let setbacks take you off of your path.”

To learn more about the College of Aeronautics and Engineering, visit: https://www.kent.edu/cae