Alumna’s Inaugural Poetry Book Dedicated to Women in Her Life

Pamela R. Anderson-Bartholet, AAB ‘89, MA ‘94, MFA ‘12, has a long history at Kent State, graduating from the university three times before working for Kent State. In August, she added a new feather to her cap when The Poetry Box published her first complete collection of poetry, “Just the Girls: A Kaleidoscope of Butterflies; A Drift of Honeybees.”

Pam never planned on pursuing more education after high school, but after working in a factory for a year after graduating, she decided to enroll as a business major at Kent State at Trumbull, right down the road from where she grew up. 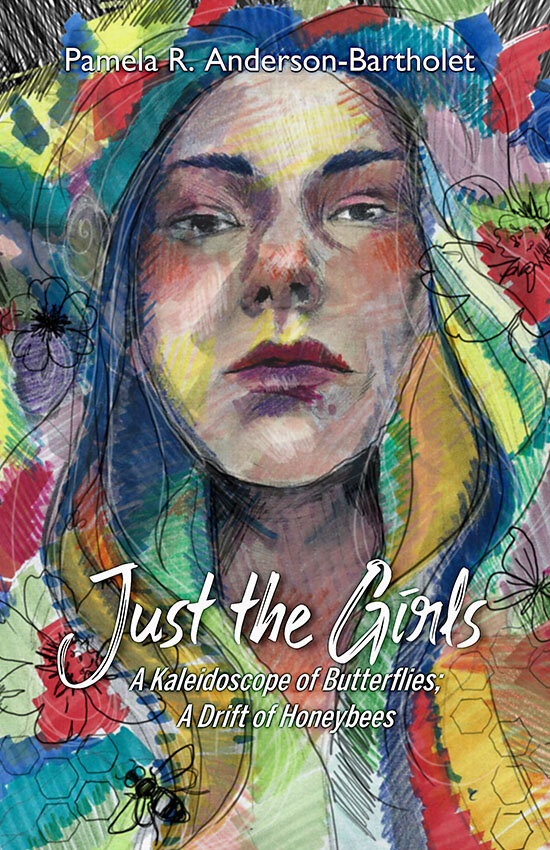 After being in and out of classes for a few years, Pam finally completed her associate degree and worked as an assistant to the president of a local bank. She then earned a communications degree from Hiram College, and secured a job working for one of the vice presidents at Kent State.

Between writing grants, working with former Kent State President Carol Cartwright, and helping to plan the 25th anniversary commemoration of May 4th, Pam decided she was not done with her education. She continued to work for the university while pursuing her master’s degree in English literature at Kent State.

All along while Pam wrote for each job she had, she continued to make poetry on her own time. After years of writing and throwing her work in a box, Pam completed her last degree in 2012, earning a Master of Fine Arts degree in creative writing.

After her husband’s heart attack in 2016, Pam turned to yoga to calm her mind. She began to write poems about yoga as well as poems inspired by the most important women in her life.

“Last year I wanted to give each of those women a poem dedicated to them for Christmas,” Pam said. “When I looked at other poems I had written over the years, I realized that I had written all of these poems for women. They seemed to be connected, so I put them together in a book.”

The book began as a Christmas gift, and then Pam submitted the collection to multiple publishing companies. After multiple rejections and some trial, error and rewrites, The Poetry Box  accepted the chapbook for publication.

Each poem is dedicated to an important woman in Pam’s life: daughters, nieces and some of her favorite yoga instructors, to name a few. The book reflects women from all walks of life who have grown into strong, powerful figures that uplift the other women around them.

“It’s really about how as women we have to help each other, and we will help each other,” Pam said of the book. “In this new world that we are creating, as a woman, you get to win.”

Fittingly, Pam reached out to two important women in her life, her niece, Meredith Balogh, BFA ‘09, and her daughter, Rachel (Lysa) Anderson, BA ‘19, to design a cover that would capture the essence of the chapbook. Both Lysa and Meredith are also former Golden Flashes who studied art during their time at Kent State.

Meredith began the process of creating the cover through a piece she had previously done of a friend, and Lysa collaborated with her, adding color to the piece after Balogh was done. Pam’s goal was to convey an image of a strong, fierce woman who had been through it all and was better for it.

“It conveys this sense of  ‘I'm tough. I've been there. I've done that. Don't mess with me, but I'll still give you a hug. I'm strong, but I’m still gentle,’” Lysa said. “It’s getting up a lot of attention, which I was surprised by because it's a small poetry book from a very small publishing company. We didn't expect the cover or the book to take off like that, but it was really cool.”

Since graduating, Balogh has worked in IT while pursuing art and has recently focused on more digital painting. She described the process of creating the cover as an extension of the book’s meaning.

“To me, handing it off to Lysa to do the coloring kind of signified the power in saying ‘I can only give this much, and that’s okay, and now you're going to give what you can.’”

And this planning and attention paid off. The cover recently placed second in the AllAuthor Cover of the Month Contest, gaining recognition for the vibrant and original artwork. Lysa said her professors in the art history and Visual Communication Design programs made all of the difference during her time at Kent State.

“You get these professors who are so passionate about what they do and about their students, those are the ones that made a huge difference for me,” Lysa reflected. “I really appreciate what those people did for me and the connections I made with them.”

Pam plans to publish more in the future and is working on a variety of pieces now, so it should only be a short time until the world gets more poetry from her.

To learn more about “Just the Girls: A Kaleidoscope of Butterflies; A Drift of Honeybees,” visit https://thepoetrybox.com/bookstore/just-girls.