Live Chat
Volunteers Dave and Terri Cardy pack and weigh produce to hand out at the Campus Kitchen in Beall Hall. The food is mostly donated by Trader Joe’s locations in the Cleveland area.

The Campus Kitchen at Kent State University, a student-run organization that reclaims food to feed the needy in the Kent area, has had to swiftly switch gears from operating a hot food kitchen to an expanded food pantry.

Normally, the Campus Kitchen would have about 20 visitors during its weekly pantry distributions. Over the past few months, however, that number has grown to more than 50, with an additional 20 bags of food delivered to families in need at Holden Elementary School. 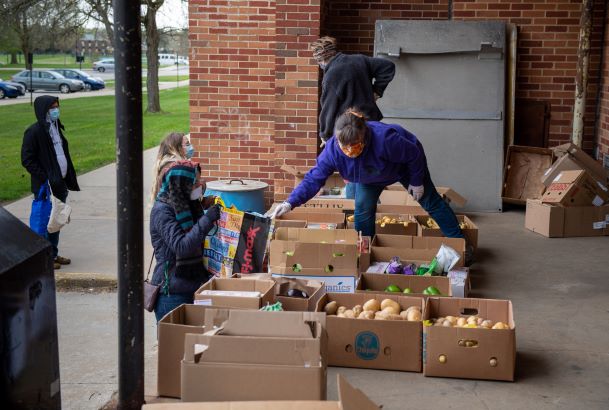 From its home kitchen inside Beall Hall on the Kent Campus, the organization distributes between 1,500 and 2,000 pounds of food to people in need every Friday between 1 and 4 p.m.

The organization, which describes itself as “a student-powered response to hunger,” was started in 2011 by a group of Kent State students after they participated in an Alternative Spring Break and learned about food waste and food insecurity. Nine years later, the Campus Kitchen is operated by volunteers that include Kent State students, faculty and staff, and members of the Kent community. Volunteers repurpose food that would otherwise go to waste from local farmers and grocers and use it to prepare hot meals and grocery bags for distribution from the food pantry.

Since the pandemic began, the Campus Kitchen has played an important role in tackling increased food insecurity in the Kent area due to escalating unemployment from the pandemic. It has been able to pivot from making full meals to only collecting and distributing food from the pantry.

In June, Campus Kitchen received a $2,000 grant from the Portage Foundation's COVID-19 Rapid Response Fund to assist with food insecurity in the local community in the wake of the pandemic. Specifically, the money will support Campus Kitchen's partnership with Kentway Apartments, a low-income housing facility in Kent for senior citizens.

Amanda Woodyard, director of Community Engaged Learning at Kent State, who oversees the Campus Kitchen, said the pandemic has changed the way the service operates.

“Luckily we’ve been able to continue recovering food four times a week from our main community partner – Trader Joe’s in Woodmere, Ohio,” she said. Trader Joe’s donates food that can’t be sold because it is too close to its “sell by” date. Donated items include meats, eggs, bread, fresh fruits and vegetables.

While the Campus Kitchen cannot currently host cooking shifts to provide hot meals, the organization is still able to distribute food at its on-campus food pantry.

“We’ve moved the pantry to once a week – Fridays from 1 p.m. to 4 p.m. – and modified the operation so that there are only two to three volunteers at a time, who handle the food with gloves,” Woodyard said. “The food is set up at the Beall Hall loading dock in a way that allows for maintaining the recommended social distancing guidelines and allows for users to drive up and go.”

Facial coverings are encouraged for anyone wishing to visit the pantry. 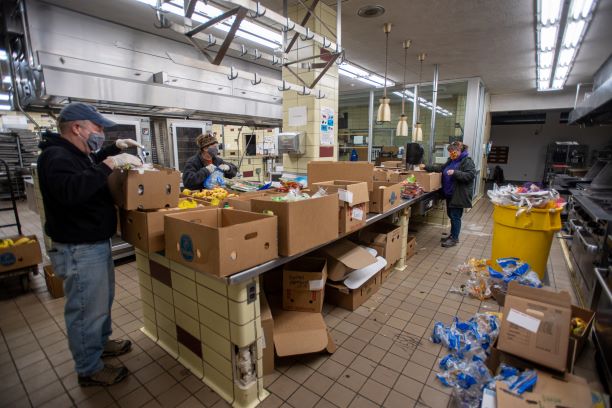 Volunteers said nearly two-thirds of the people receiving food at the pantry were tied to the university and included students who were still in Kent or employees who needed some assistance.

Woodyard said new visitors to the pantry require food assistance for a number of reasons. One of the personal stories she has witnessed was a single mother who has been struggling to manage expenses after her adult son passed away unexpectedly without life insurance. Another story, she said, was a couple who work for the university who have been raising their grandchildren. They sent Woodyard a note that read, “The kitchen is a lifesaver for both of us. Thank you from the bottom of my heart.”

Cassie Pegg-Kirby, director of the Women’s Center at Kent State; Terri Cardy, an instructor at the university’s Childhood Development Center, and her husband, Dave, are among the volunteers that Woodyard calls “frontline heroes.”

These volunteers have gotten to know the people who come in each week. They share recipes and make recommendations about uses for the ingredients they have available.

“There’s a little girl who comes in with her mom every week who can’t wait for the baby oranges,” Pegg-Kirby said. “So we make sure we save some for her.” 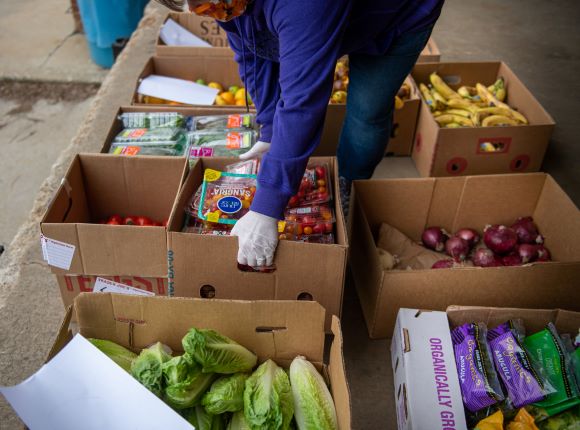 Each person who visits the Campus Kitchen leaves with about 25 to 30 pounds of food packed in a box or a bag. Any food that is left over after Friday is given to community agencies such as Kent Social Services, Kentway Apartments or the Center of Hope.

Pegg-Kirby said she enjoys speaking with the students who come to the Campus Kitchen, talking about their majors, how their classes are going and about their concerns. She also has spoken with members of the community and university staffers who are unsure of their job security and what the impact of this pandemic will be in the short and long term.

“This is a difficult time for many, especially with all the unknowns,” Pegg-Kirby said. “But the pantry is not a place of sadness; it is a place of hope and community.”