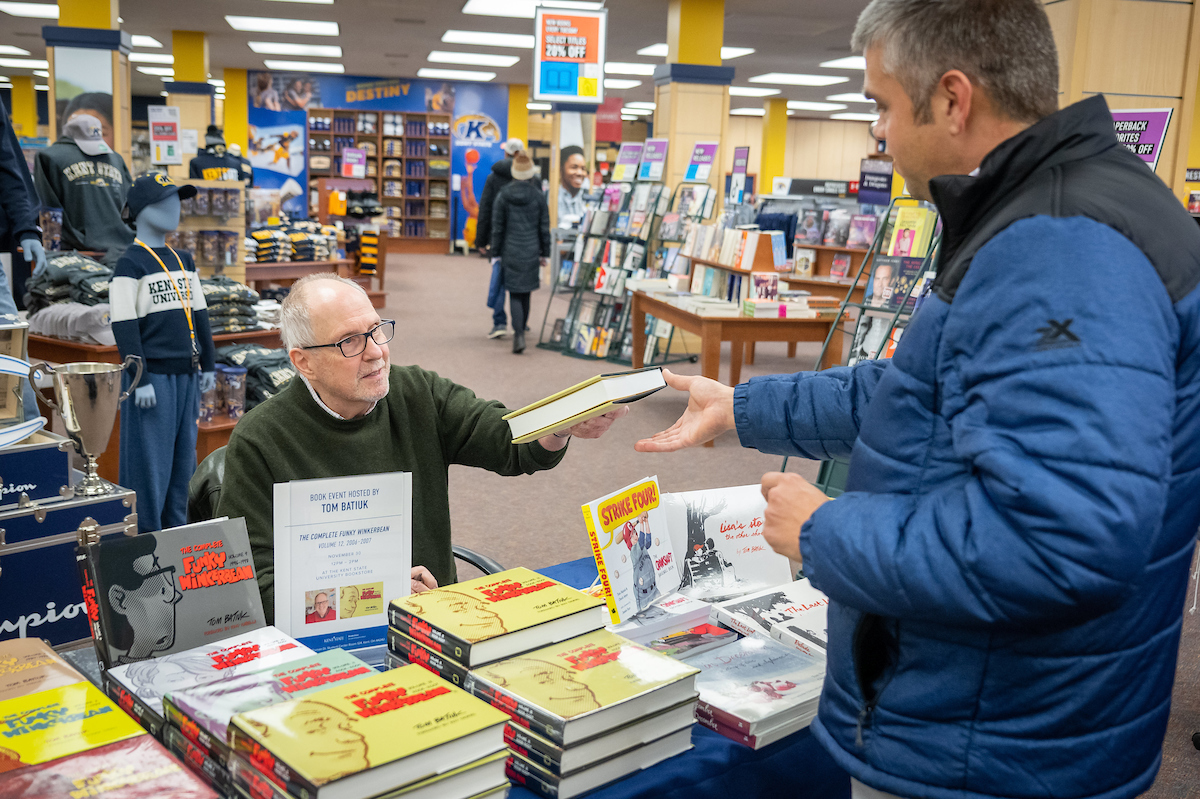 As ‘Funky Winkerbean’ Comes to an End, Comic Strip’s Creator Reflects on 50 Years

“My mom’s an art teacher,” is how Kent State University student David Brondfield introduced himself to cartoonist Tom Batiuk, a Kent State alum and creator of the “Funky Winkerbean” and “Crankshaft” comic strips.

“Art teacher is a great job,” replied Batiuk, who worked as a junior high art teacher in Elyria, Ohio, before his career as a cartoonist took off.

Brondfield, a junior from Mayfield, Ohio, majoring in computer information systems, was the first in line to get an autograph from Batiuk, who was at the University Bookstore on the Kent Campus Wednesday signing copies of his many books, including his most recent compilation of the “Funky Winkerbean” strip, “The Complete Funky Winkerbean Volume 12: 2005-2007,” published this year by Kent State University Press.

For 50 years, Batiuk has penned the adventures of the students and staff of the fictional Westview High School, following them through the decades as they aged and along the way dealing with serious subject matter such as teen pregnancy, suicide and alcoholism. The cancer journey and eventual death of Winkerbean character Lisa Crawford Moore was a finalist for a 2008 Pulitzer Prize. 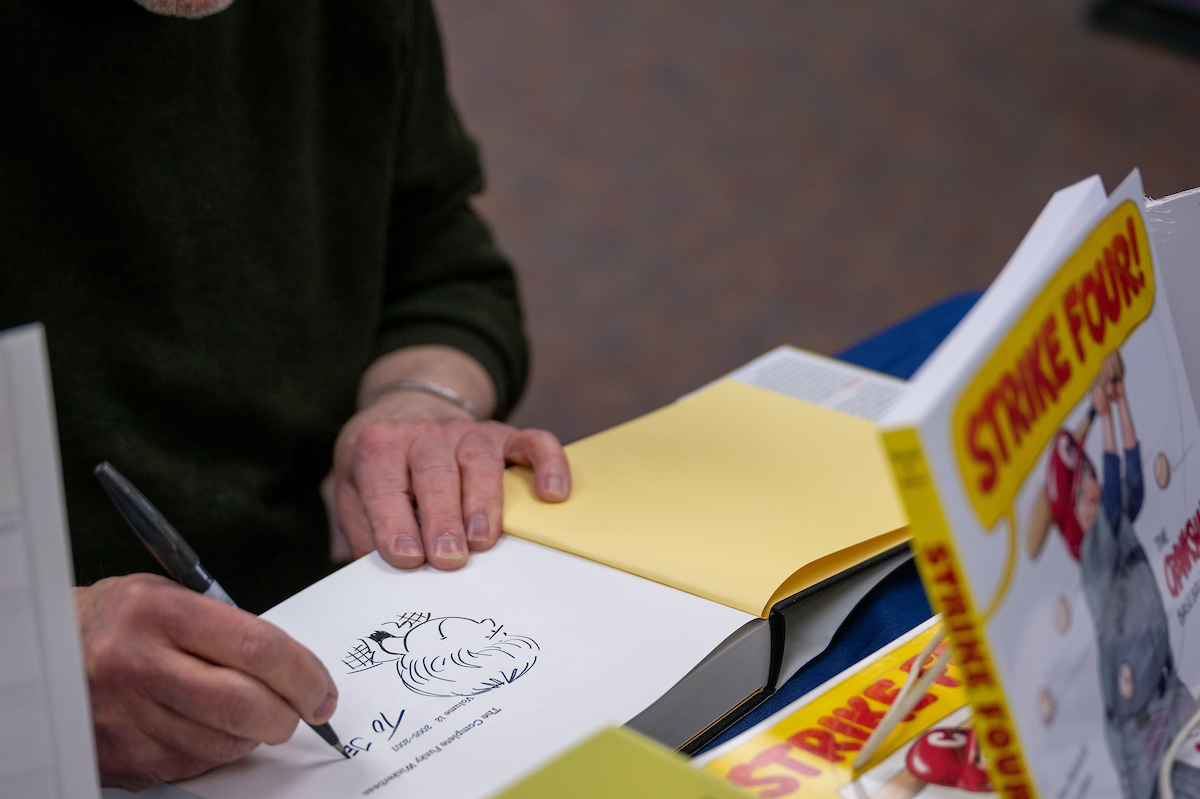 Sharpie in hand, Batiuk quickly sketched the face of his famous character on the inside of Brondfield’s book as the pair chatted about art teachers who were mutual acquaintances.

Earlier this year, Batiuk announced that “Funky Winkerbean,” which he began on March 27, 1972, would end on Dec. 31. He will continue to produce “Crankshaft,” with artist Dan Davis, which follows the life of a former minor league baseball player-turned school bus driver, a strip that was a spinoff of Winkerbean.

Batiuk who earned a bachelor of fine arts degree from Kent State in 1969, said he wasn’t quite sure whether his books would resonate with today’s college students when he arrived for the signing.

His fans found him, though, including Jeff Young, a philanthropic advisor for Kent State’s Center for Philanthropy and Alumni Engagement.

“I grew up with Harry Dinkle,” Young said, of the band director character in “Funky Winkerbean.” Young said he was in his high school marching band and knew the Dinkle character from the comic strip and from real-life experience.

Batiuk assured Young that Dinkle was not gone for good, and told him to look for him to reappear in “Crankshaft” from time to time.

At 75, Batiuk said he made the decision to end “Funky Winkerbean” because there was no succession plan in place for it.

“I wanted a proper ending for my characters,” he said. “I wanted to end their story the right way.”

The final storyline for the Winkerbean strip already is running, with a look back through the eyes of the Westview janitor, Harley Davidson, a minor character in the strip almost since its inception, who Batiuk now has brought into the foreground as a witness to the strip’s history.

The finale will see the Winkerbean and Crankshaft strips come together for a big finish, he said.

Not having to produce the daily strip will give Batiuk the time to complete the Winkerbean compilation book series. With three complete years of the strip in each volume, Batiuk anticipates five more books to take the series through its 2022 end and is pleased to be working with Kent State University Press as the publisher. “It will be very satisfying to think I could possibly complete those,” he said. 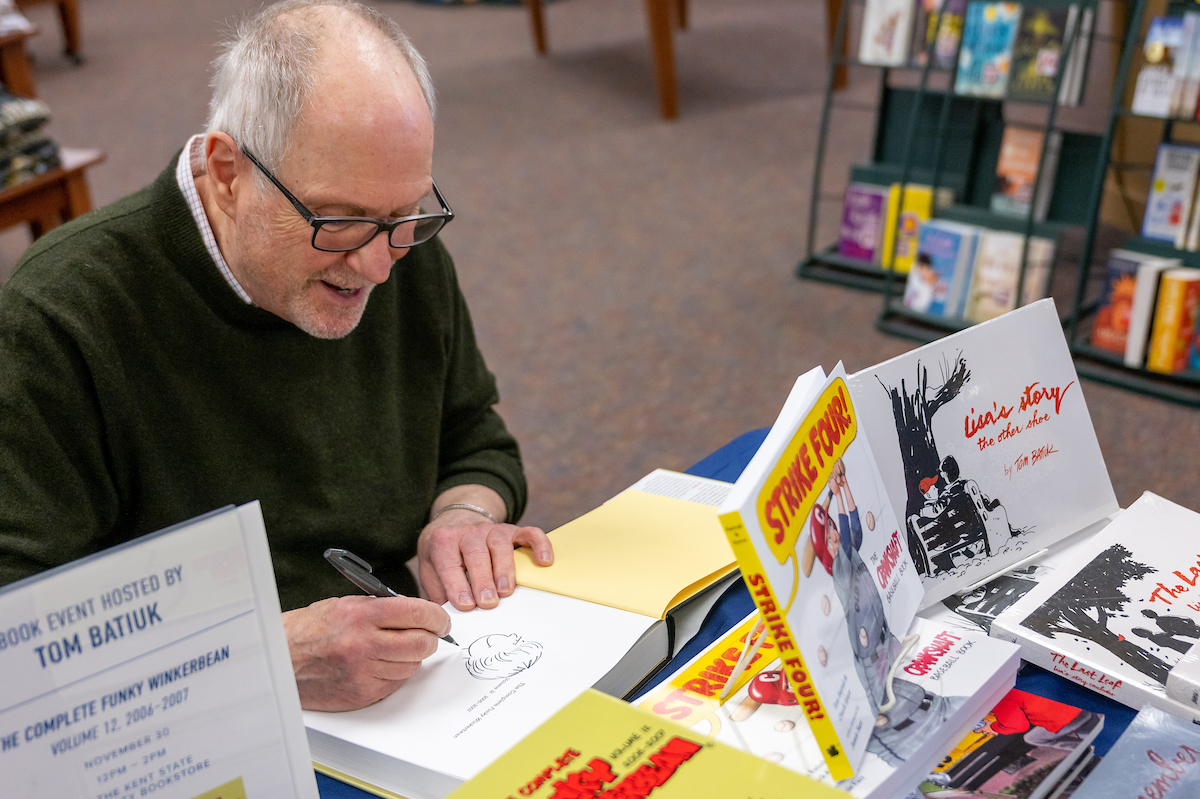 Returning to campus, Batiuk said, is always enjoyable, as he reminisces about his times hanging out at the Hub, or his search for a comic book store when he first arrived on campus.

Batiuk said he intends to donate all his Winkerbean strips and research materials to Kent State University Libraries to be archived and saved for research purposes. He plans to devote some time now to organizing the collection and getting it ready to be donated.

Kent State, he said, is where his dream of becoming a cartoonist began and over the years, he has watched his dream come true.

“This is totally what I always wanted to do,” Batiuk said.