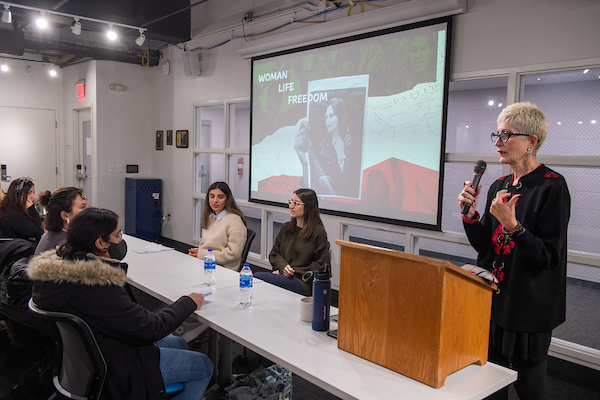 Iranian Members of Kent State Community Say: We're Here to Ask You to Support Us

Two Iranian-born women who are also members of the Kent State community shared this unifying slogan in Farsi and English with students, faculty, staff and others Wednesday night after discussing the uprising in Iran and the history that brought the country to this point.

A standing-room-only crowd gathered to hear Kent State alumna Mahtab Tehrani, Ph.D., and first-year student Goli Kavoosi, discuss how the denial of human rights in Iran impacts us all and what tangible actions Americans can take to help.

“This is not a protest anymore, it is a revolution,” said Kavoosi, a fashion design major who was born and raised in Tehran, Iran, and has been in the U.S. for eight months. “This is not tied to a political or ethnic group. There is no leader. The people are going by on their own. All the people of Iran are aligned for the goal of freedom. We’re here to ask you, if possible, to support us.”

The Women's Center, in collaboration with the Wick Poetry Center, the School of Peace and Conflict Studies, the May 4 Visitors Center, the Society of Global Cultures and the May 4th Task Force, hosted the discussion in the May 4 Reflections Gallery in Taylor Hall.

Weeks of protests erupted in Iran after the death of Mahsa Amini, a woman who died while in police custody after being arrested by the Iranian morality police in September for allegedly wearing her headscarf too loosely, according to news reports. The Iranian police say Amini died of heart failure, but her family and others accuse police of murdering her. Since the protests ignited, hundreds of people have been killed, injured and jailed by Iranian police. 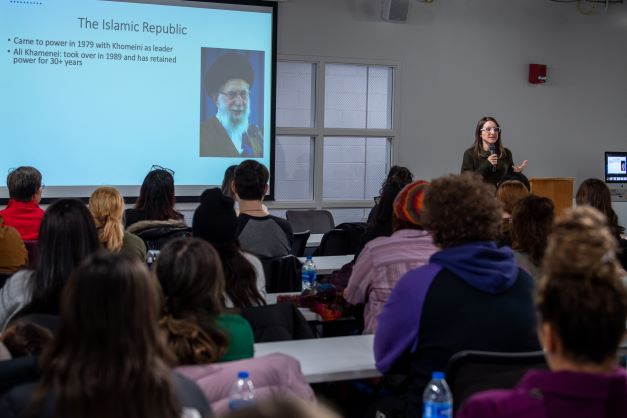 Tehrani, who earned her bachelor's degree in 2011 and her Ph.D. in neurobiology in 2018, both from Kent State, gave a concise yet thorough history of the major protests that have erupted in Iran since 1979, when the Islamic Republic took over Iran. She said the Islamic Republic is an autocratic system of government that has a history of torture, rape, terrorism, and economic and political corruption.

“There is so much pent-up anger and frustration from four decades of oppression," said Tehrani, a Tallmadge resident who was born amid the Iran/Iraq war in the 1980s and now is doing postdoctoral work at Northeast Ohio Medical University. “This is the first protest or revolution in which the people are actively fighting against the Supreme leader. They go out, put their lives on the line and risk their lives. They may not come home at night.”

Both women urged Americans to join the revolution by being the voice of the Iranian people through social media. “I encourage you all, if you have time to spare, to join credible social media pages that are doing outstanding reporting every day,” Tehrani said. “Talk to your politicians. Call out anything you recognize as going against people’s demands. People are asking for their basic human rights.”