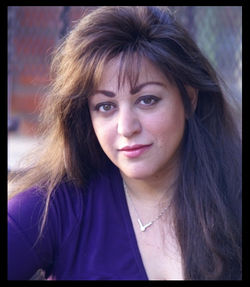 Love, loss and hope. These are three critical elements Maria Jacobs brings – along with her considerable professional experience – to the Kent State University community. Jacobs is a part-time instructor in the Hugh A. Glauser School of Music and a nationally known jazz singer.

“Every day that I teach, I learn a tremendous amount,” Jacobs said. “Students come in with ideas and goals for not only their voices, but also knowledge of the ‘Great American Songbook’ and music theory. It brings me immeasurable joy to see their faces light up when they love a song I introduce for the first time.”

Jacobs has been serving the students at Kent State since 2018, teaching Applied Vocal Jazz and directing The New Group, a second vocal jazz ensemble. She is also a co-teacher alongside her childhood mentor, Christopher Venesile, Ph.D., associate professor of music education and faculty coordinator of Master of Music in Music Education, for the Kent State ensemble Nova Jazz Singers. She teaches voice at Kent State University at Stark and is a licensed music educator in pre-K and K-12, teaching middle schoolers at the Open Tone Music Academy. She also acts as a curriculum advisor to the local Boys and Girls Club after-school music programs.

Jacobs grew up singing in church and with her father, a jazz musician himself. She graduated from Ohio State University with a degree in broadcast journalism, then served as a traffic reporter and disc jockey in Cleveland.

She then relocated to Los Angeles for 12 years to fulfill her dream of a music career. Today, she performs locally at Blu+ Jazz in Akron.

Jacobs performs song selections from her seven self-produced albums: Chasing Dreams, Free as a Dove, Here Comes Winter, Lucky Girl, Art of the Duo, No Frills and Hold On Your Heart. Jacobs is also creating a live recorded album that will be released later this year. Her nationally known song, “Pour Me a Cup of Yesterday,” is heard on smooth jazz stations across the country.

She was influenced by her mentors as well as famous jazz and pop artists, such as Ella Fitzgerald, Chick Corea, Joni Mitchell and more.

In 1990 at Ohio State University, she found herself failing classes and suffering from her bipolar disorder. She found refuge in sneaking out of her house to go sing at late night clubs.

“I could function better with music than function in daily life,” Jacobs said.

Throughout her years of struggling, she always found comfort in her music, resulting in seven released albums, including one in production and a Christmas album in the works.

“Music has been therapy long before my actual career began to roll,” Jacobs said. “I wrote and sang as a release and as a way to work through all of the difficulties I endured. I think this is evident through my lyrics and song selection. I became the kind of writer who wrote autobiographically for the most part, even when I was singing in third person. I write about love, loss and, most especially, hope.”

After three decades of being diagnosed with bipolar disorder, Jacobs is in remission and recently finished her book titled, “Grateful: Faith, Healing, and the Gift of Music.” Once she returned to Ohio, Jacobs was able to stabilize her mental health through the support of her loved ones and a team of doctors. She regained the strength and passion to write and sing again.

“The purpose is to tell my story, one that would speak not only to Christians, but anyone living with adversity, especially with mental illness and loss of faith, as a result,” Jacobs said.

She began the writing process while living in Los Angeles 20 years ago when her mental illness was at its worst with inattentive doctors and several major episodes.

“It was therapy to write,” Jacobs said. “I don’t even think I knew or even planned that it would eventually become a book. I just wrote for months about my pain until I just couldn’t write anymore. I came out on the other side of the enormous mountain, and I knew I had to tell my story.”

Jacobs was driven to write about her experiences by authors and artists such as Patty Duke and Kay Redfield Jamison who were also diagnosed with bipolar disorder and wrote about their occurences.

“I also hope to have an album titled ‘Grateful’ that I can sell along side of the book,” Jacobs said. “I have lived a full life, but one where I also lived, endured and overcame bipolar disorder and much of the adversity that went with it through my music.”

Learn more about the Hugh A. Glauser School of Music at www.kent.edu/music.

Jacobs personal work can be found at www.mariajacobs.com and www.gratefulauthor.com.