Live Chat
The cast and crew of "Manual for a Desperate Crossing" smile for a group photo. 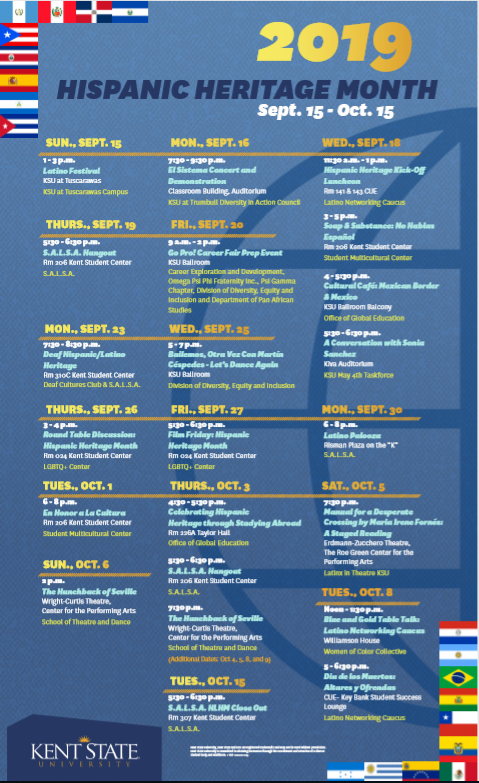 From Sept. 15 to Oct. 15, different countries, cities and communities around the world – including the Kent State University community –  have been celebrating Hispanic Heritage Month. As Kent State’s population of Hispanic and Latino students continues to grow each year, students, faculty, organizations and departments are taking the time to acknowledge the month through a series of discussion, events, dancing and even theatrical plays.

Fabio Polanco, associate professor of acting and directing in Kent State’s School of Theatre and Dance, works with Latinx in Theatre (LIT), a student organization bringing Latino students and stage productions together.

“The reason that the organization exists is to give our Latinx students an opportunity to explore Latinx plays, explore Latinx characters and playwrights, and connect to the greater Latinx theatre community,” Polanco said.

“The play ‘Manual for a Desperate Crossing’ is about Balseros,” Polanco said, referring to the people emigrating from Cuba in homemade watercrafts. “And this specifically is about the Cuban rafters crossing the Florida Straits, trying to get to the United States. They are deciding whether to cross, to build the rafts, to put them in the water, crossing and hopefully arriving in Florida.”

Unlike other events, Polanco states that that he is measuring the success of this event a bit differently than others.

“People define success in so many different ways,” Polanco said. “It might be surprising, but I say that it will be successful if it happens. What matters is for people to speak these words and for other people to hear them.”

The significance of these weeks are also emphasized across a number of offices and organizations that are working with the university student population to create pride and awareness within and around the Hispanic and Latino community.

Marcus Molina, an intern at the Lesbian, Gay, Bisexual, Transgender and Queer Plus (LGBTQ+) Center, discussed how the center uses its space to integrate Hispanic Heritage Month into its events.

“We really want to bring that community,” Molina said. “We know that people of color are very present within the LGBTQ+ Center, and so we, as a center, want to acknowledge that presence and hold those events during Hispanic Heritage Month.”

In addition to the center’s regular events, it has crossed its purpose with the celebration of this month to acknowledge those identities.

“People who are in between that intersectionality can feel represented within both communities,” Molina said.

Some events that the center hosts are roundtable discussions and Film Fridays. Film Fridays are when members of the LGBTQ+ community and the center gather to view an LGBTQ+ movie, followed by a group discussion focusing on the audience’s thoughts, feelings and reactions to the film.

“During these events, we can see its success based on the number of people that come and support the events, as well as the content, the things that are discussed within these conversations,” Molina said. “Because if someone is not willing to open up about how they feel about certain things, then they aren’t feeling comfortable in our space, and that’s the last thing we want for them.”

Sarita Kunde, student graphic designer at the Student Multicultural Center (SMC), discusses how the center has similar and different approaches to including the Hispanic and Latino community into their events.

“The SMC events allows students to come out from all different cultures and backgrounds to share in educating each other on what goes on during Hispanic Heritage Month, as well as forming conversation that most people wouldn’t have on the day-to-day basis – getting people into those uncomfortable zones so that those conversations become comfortable,” Kunde said.

The Student Multicultural Center programming was intentional for events during this month.

“For Hispanic Heritage Month, we chose topics that we feel should really be discussed right now, for example ‘No Hablas Espanol,’ which was about how within the community some of us do not speak Spanish but it doesn’t make us any less Hispanic,” Kunde said.

Collaborative events hosted by the Student Multicultural Center are open to anyone as they serve as opportunities to share perspectives and learn.

“We have ‘En Honor a La Cultura,’ which will further educate audiences that typically we wouldn’t be able to engage with,” Kunde said.

“If we hear people continuing the conversation as they are leaving the SMC because, yes we can bring in a lot of people and have a lot of numbers, but at the end, it actually matters what they took away from the session,” Kunde explained as one way that she personally considers the success of an event. “For the SMC, seeing those students engaging in other activities that the SMC holds because they were just interested in the first event.”

Encouraging students to engage with students from different backgrounds and experiences is one of the missions of the Office of Global Education.

“We will be hosting an informational session about different study abroad programs in Hispanic countries,” said Molly Papay, education abroad advisor in the Office of Global Education.

The office’s most popular program is in Florence, Italy; however, they want to share about the additional opportunities that the office leads.

“We figured that it’d be a good idea to let the students know all the different opportunities they have, and so we’ll talk about different exchange programs that we have through the university,” said Sara Morato, assistant director of education abroad in the Office of Global Education.

Morato hopes their event brings out as wide variety of attendees – “anyone from undergrads, grads, faculty, staff, anyone that is a proponent of study abroad,” she said.

The office is located on the edge of campus in Van Campen Hall, intentionally placed in the middle of the events and action for Hispanic Heritage Month.

“We are a part of the university, and we want to showcase the opportunities that students have in different cultures,” Morato said.

The recognition for the month also holds personal significance for Morato and students as well.

“I am from Bolivia, so it’s a way for me to give back,” Morato shared.

“It can also serve for a student seeking a heritage-seeking opportunity and trying to learn about their family roots,” Papay added.