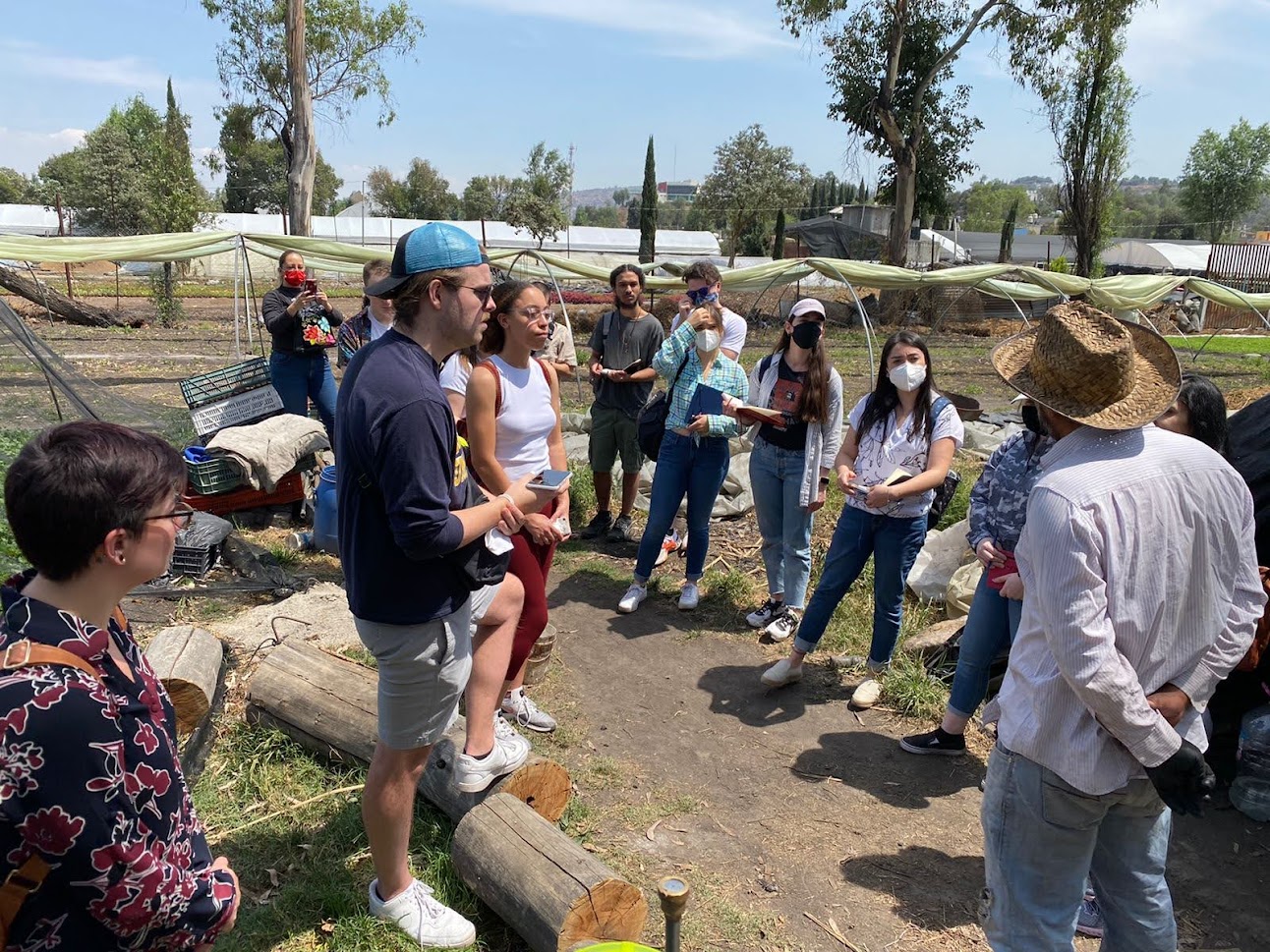 The program enabled 11 Kent State students from the Stark and Kent campuses to spend their spring break in Mexico, and a group of 11 students from Universidad Panamericana (UP) to spend a week in Northeast Ohio in June, working at Shanti Community Farms in Akron’s North Hill neighborhood, which is home to large groups of immigrants. 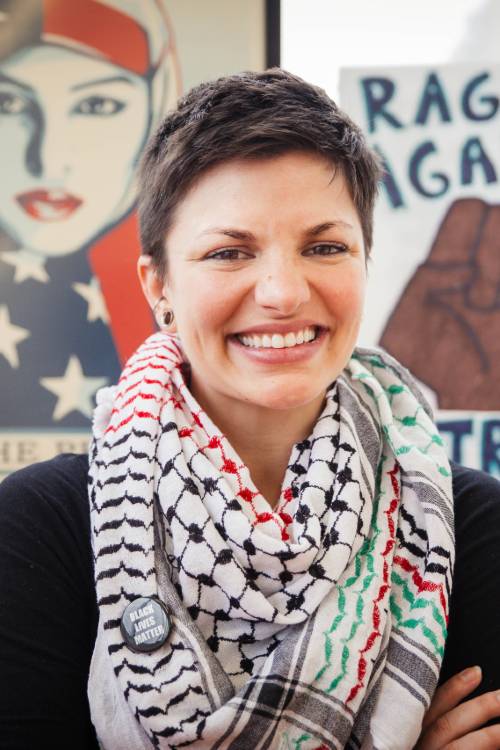 Sarah Schmidt, assistant director of Global Education Initiatives at Kent State’s Stark Campus, spearheaded the project, which was three years in the making due to delays from the pandemic. The project, titled, “Sustainable Gardening for Poverty Reduction, Cultural Preservation and Economic Inclusion,” had a multifaceted goal, she said.

Jada Howard, a junior majoring in pre-veterinary medicine, is one of the students who made the trip to Mexico. A first-generation college student from Canton, Ohio, Howard said the trip was a perfect fit for her minor in geology.

She felt passionate about going on the Mexico trip after hearing Schmidt talk about the mission behind it. After experiencing the trip, Howard said she shares that passion.

The program’s focus was to provide learning opportunities for Kent State and UP students, so they could gain knowledge and hands-on experience in areas of sustainable environmental science, entrepreneurship and financial inclusion. The deeper goal, Schmidt said, is for those experiences to make the students more well-informed future leaders with a well-rounded knowledge of issues of environment, entrepreneurship and economic inclusion and how they all intersect as part of the experience of immigrant communities.

The students studied economic inclusion initiatives that incorporate sustainable gardening and indigenous farming practices among resettled populations in both Ohio and Mexico. Sustainable gardening is a way for immigrant populations to support themselves and reduce their poverty by being able to produce food for their people to consume and sell, Schmidt said. Their native farming techniques serve as a way for immigrant populations to preserve parts of their cultures in their adopted homelands.

For the Kent State students who traveled to Mexico, the week included meeting with resettled refugee populations from Central America living in Mexico City and visiting Xochimilco, a Mexican community of indigenous people directly descended from the Aztecs, who practice traditional chinampa farming.

Chinampas are an indigenous and highly sustainable agriculture system made of a set of artificial floating islands. Schmidt described their huge and beautiful crops, free from chemical additives. "The technology is very simple, it’s all done by hand, no pesticides, what we would call organic.” 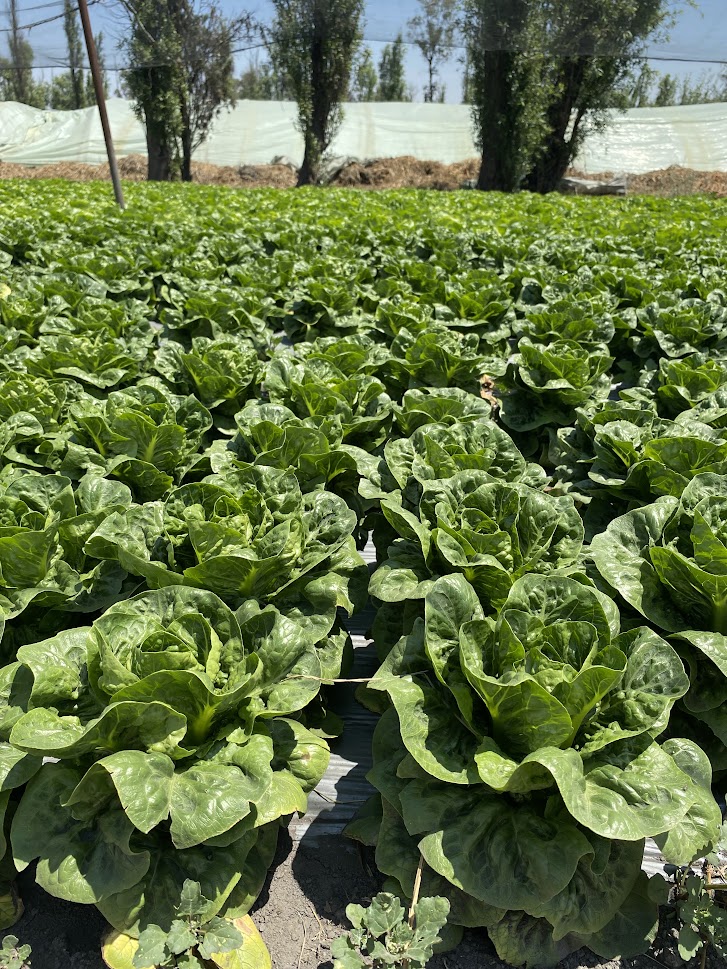 Schmidt explained that despite issues of economic inclusion and social marginalization, chinampa farmers of Xochimilco have sustained the traditional practices.

“It was amazing,” Howard said, “To see how an entire community is literally fed by one man, that was very, very interesting. Some of those farmers live in very poor communities.”

The students were able to plant seeds with the farmers, learn about how they continue to preserve their native farming techniques and learn how their communities managed to survive the pandemic.

The chinampa, Schmidt said, reminded her of Ohio’s Amish communities, so she added a visit to Amish farms in Holmes County to the activities when the students from Universidad Panamericana came to Ohio.

Even though Amish farmers are not recent immigrants, their traditional farming techniques and their way of life are rooted in preserving their cultural heritage, Schmidt noted. “In Xochimilco, I kept thinking about the Amish. There are so many similarities. They are resistant to chemicals and pesticides, (and) they farm by hand with traditional techniques.”

Schmidt and her counterparts at Universidad Panamericana also worked with United Nations Mexico to help the Kent State students to have access to migrants who had been resettled into Mexico primarily from El Salvador.

Howard said being able to meet with and interview families who are refugees and seeking asylum and to learn their stories and struggles was an eye-opening experience.

“That’s stuff we would only see on the news,” Howard said, “Some of us don’t even know people who have tried to find a better life for themselves and to be able to get that firsthand experience, it was absolutely eye-opening and something I will cherish deeply forever.”

On a philosophical level, Howard said the trip made her grateful for the life she has. “I have shaped the life that I get to live. I don’t have to get up in the morning and look over my shoulder and fear for my life as they do.” 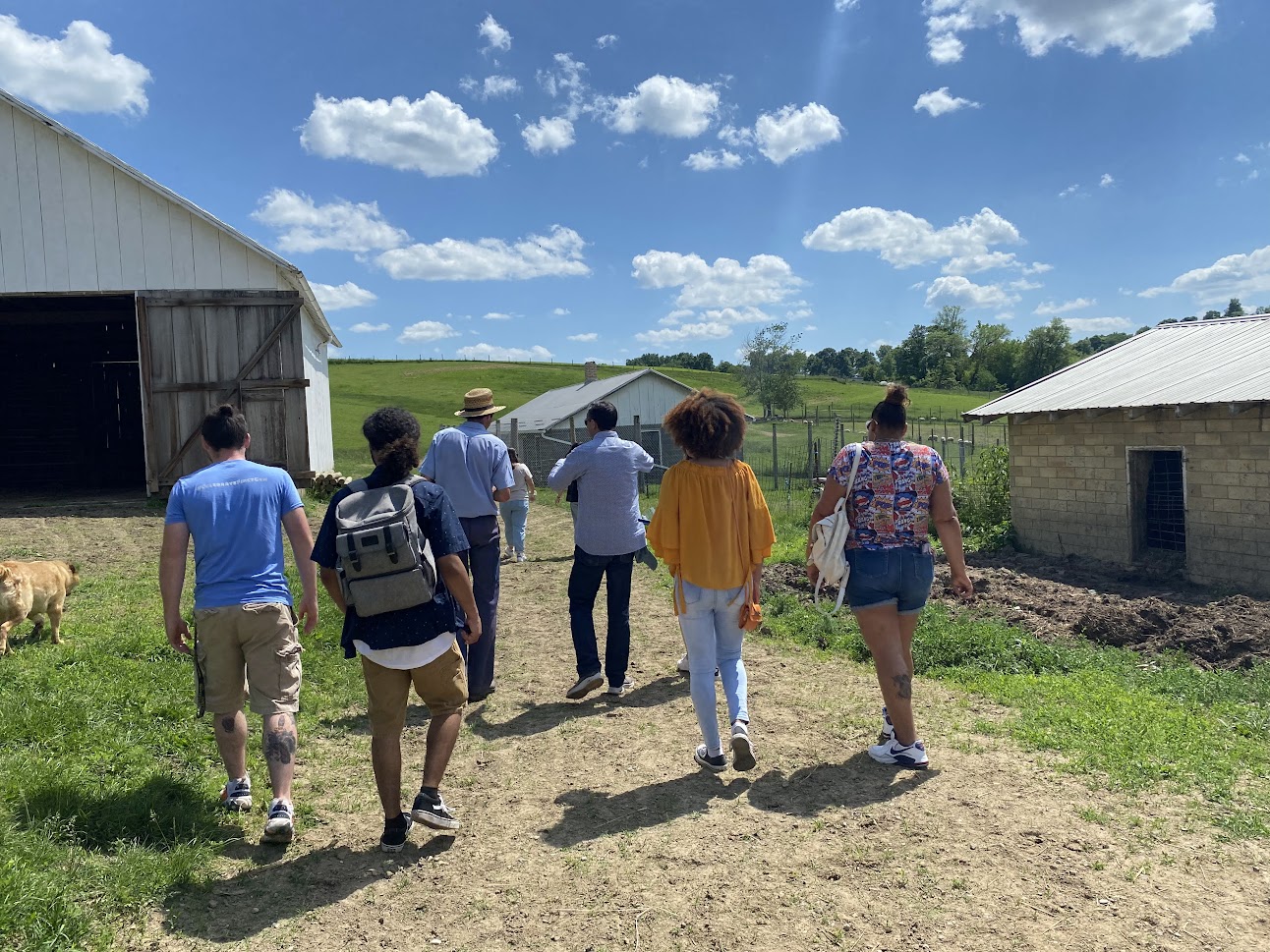 At Shanti Farms, the students spent part of the week working on the farm and learning about the diverse crops they produce, and spent time developing projects, both economic and environmental, to help the farm and the immigrants who grow there.

The economic group, Schmidt said, worked with a bike shop in Canton to develop a bicycle sharing program to help the students with their transportation issues getting around the Akron neighborhood.

An environmental group provided research on Shanti Farms’ negative carbon contribution, and how the nonprofit can partner with a larger company to buy its net-negative carbon footprint to help its own goals toward carbon neutrality.

As an example, Schmidt described how a manufacturing company with a large carbon footprint can buy the carbon negativity of a small farm such as Shanti to assist with its goal of being more carbon neutral. The large company can claim the farm’s carbon negativity to lower its own carbon footprint, and the cost of the purchase can be a big financial boon for a small operation like Shanti.

The composting group also tested the farm’s soil and provided Shanti growers with an exact nitrogen calculation formula for the compost used to treat the soil to grow the healthiest crops. The students looked at school waste, organic waste and farm waste to produce the best formula, Schmidt said.

The project has a strong, personal connection for Schmidt, who sits on the board of directors of Shanti Farms, which operates the International Peace Garden in Akron’s North Hill neighborhood, home to many resettled immigrant communities from Nepal, Bhutan, the Congo and other Central African areas.

“For me, this is my personal connection, the larger scope of the social impact of the program, working with resettled communities and working with the UN Mexico,” Schmidt said. “The larger goal is to end up with shared best practices for asylum seekers and refugees in Akron and Mexico City, and connections made through our institutions.”

She said Shanti Farms has been a strong partner with Kent State Stark for many years, as a source of internships and other learning for students, and Schmidt said she knows that collaboration will continue. 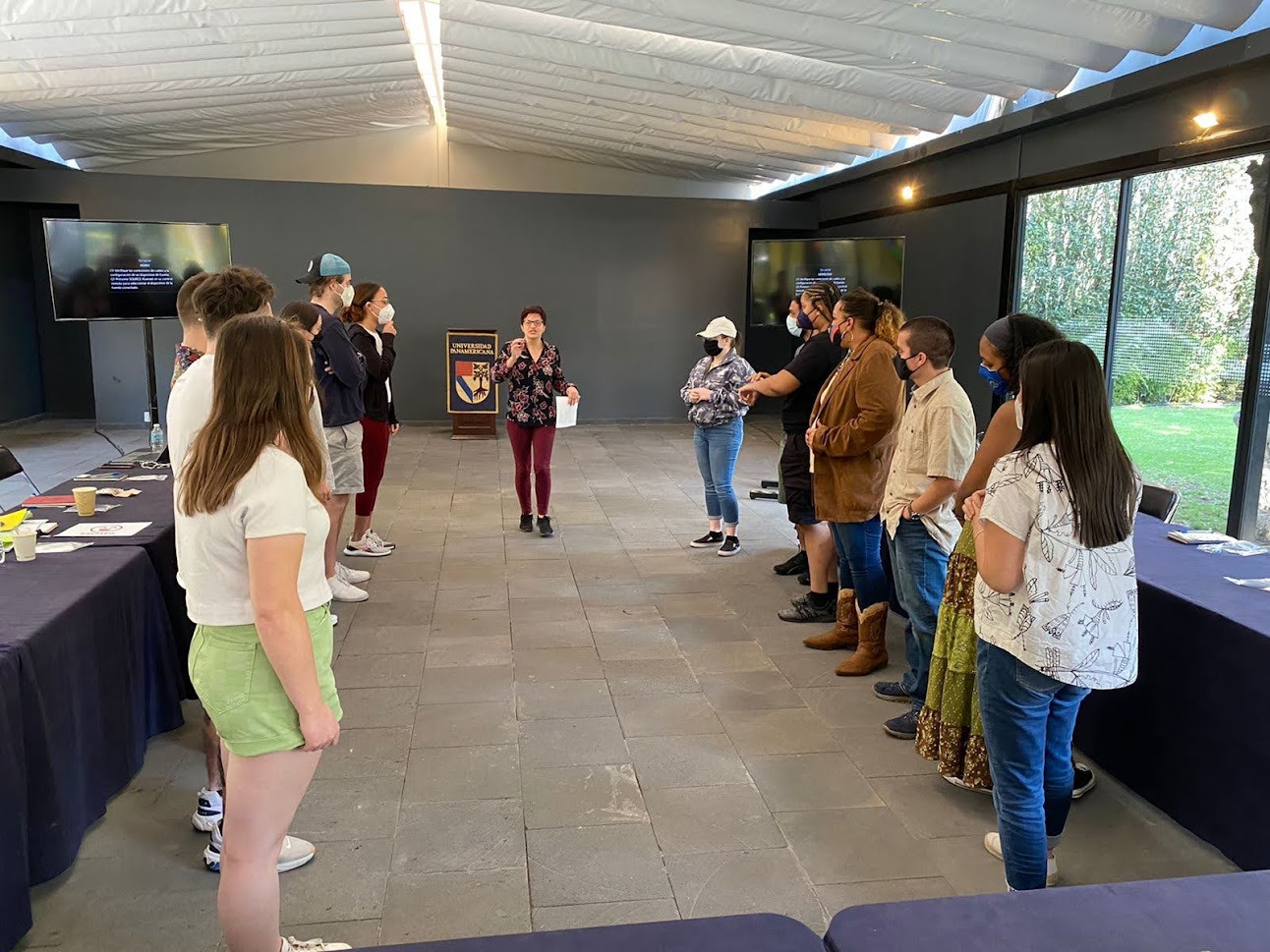 The collaboration with Universidad Panamericana is also an effort that Schmidt said she hopes to see continue. Schmidt said she engaged with Salvador Rivas Aceves, Ph.D., an economics professor and assistant dean of research at the Mexican university, to develop the program. “It took us a couple of years to hash out all of the plans because of COVID, but that was OK because it grew in really great directions.”

The project was made possible by a grant from the 100,000 Strong in the Americas Innovation Fund, an initiative supported by the U.S. Department of State, U.S. embassies and Partners of the Americas, in partnership with companies, foundations and educational institutions working to strengthen the collaboration among governments, business and academia, critical to economies in the Americas.

Schmidt said she was familiar with the organization and was able to write a proposal for a grant that was offered specifically for programs focused on environmental issues and poverty reduction and included a component of northbound/southbound travel for its participants, which made the Kent State/ Universidad Panamericana collaboration a perfect fit. UP previously had been a partner for a program with nursing students from Kent State Stark.

Schmidt and Vaneet Kaur, Ph.D., an assistant professor of Management & Information Systems at Stark, accompanied the students during the spring break trip in March.

The group of Kent State students who took part was an academically diverse group of freshmen through seniors, representing both the Kent and Stark campuses and coming from 10 different majors, including geography, criminal science, environmental students, biology, international relations and business and economics.

Schmidt said she has worked with underrepresented students on the Stark Campus and reached out to them specifically so that she could offer the spring break experience to as diverse a group as possible. Each student received $900 of the grant money for their travel expenses, making the trip affordable and attainable. The 11 Mexican students also received a similar travel stipend.

Howard said without the grant money to pay for the spring break trip, she and other students may not have been able to afford to go. “It lowered my cost of going immensely.” 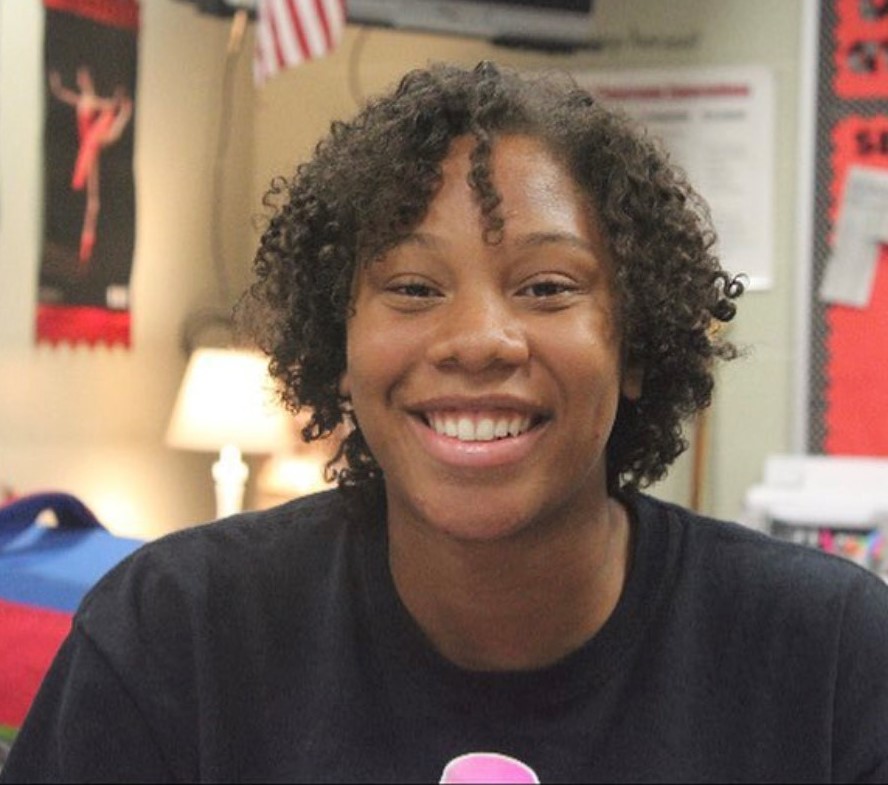 Howard, who hopes to attend The Ohio State University to study veterinary medicine after she graduates, said Schmidt has been her mentor since she was a high school student involved in Kent State’s Rising Scholars Program. She opted to continue her college career at Kent State at Stark due to the relationships she had built during that time with faculty and staff on the Stark Campus.

“I felt very welcomed into a community here,” she said.

Being able to have travel-abroad/study-abroad experiences has deepened her educational experience with opportunities she didn’t even know were available.

“I really have to say that Kent State at Stark has been absolutely amazing. I have yet to have a bad experience. Everybody, including the faculty and staff, are all so welcoming and amazing. There is a real sense of camaraderie here. Especially coming back in person, I came back strong. I am a Golden Flash and proud to be graduating from here.”