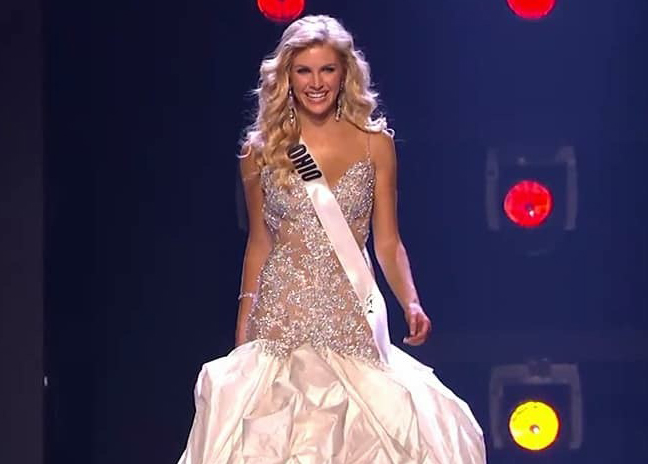 When business administration major Deneen Penn started her college career at Kent State University at Trumbull, she had no plans to become Miss Ohio USA 2018 or to launch her own honey business. By her senior year, however, she had accomplished both.

#TheWorkerBee is the motto she lives by and the platform she chose to use during her run for Miss Ohio USA 2018. The worker bees are the all-female bees that work to support a hive and keep all the honey operations running smoothly.

“My platform was centered around female entrepreneurs and empowering women in business,” Ms. Penn said.

Inspired by the bees and determined to help others recognize their entrepreneurship potential, Ms. Penn felt that this hashtag was the perfect way to tie her title and her business, Deneen Paige Honey Company, together.

“It’s more than just modeling and the fame. It was the opportunity to be able to share my passions, to be a spokeswoman for our great state and inspire our community through volunteerism,” Ms. Penn said of her decision to compete in the Miss Ohio USA 2018 pageant.

Before participating in the Miss Ohio USA 2018 Pageant and making the decision to become a beekeeper, Ms. Penn had the opportunity to become the ambassador for the business program at Kent State Trumbull.

“As a Kent State student, I was able to speak about the benefits from attending a highly credible university, along with affordable tuition by attending a regional campus. I am proud to be a Kent State Flash!” Ms. Penn said.

Ms. Penn was also used as part of Kent State’s marketing efforts, an experience, she said, which took some getting used to.

“I would be driving on the highway and see my face on a giant billboard,” Ms. Penn said.

As an ambassador, Ms. Penn got to speak at university functions and volunteer at events like the annual Turkey Trot, a Thanksgiving Day run sponsored by the Warren Kiwanis to raise money for the Alzheimer’s Association.

Amidst all of her pageant prep, Ms. Penn was also launching her honey business.

The young entrepreneur decided to start her business after attending a local festival and talking with a beekeeper. Ms. Penn then looked into the process and began taking classes with the Trumbull County Beekeepers Commission.

While Ms. Penn was the only young woman in the beekeeping classes, she was not deterred. “Everything is a stepping stone, you have to work toward each opportunity,” Ms. Penn said.

Ms. Penn and her father both invested in bee suits to properly tend to the hives. Her father came in handy when the time came to lift frames full of honey. “They can weigh up to 80 pounds,” Ms. Penn explained.

When the opportunity for Ms. Penn to compete in the beauty pageant came, she decided to make the most of it. “When I chose to go to a regional campus, I knew I wouldn’t have that traditional college experience, but I decided I would get involved in whatever other ways I could,” Ms. Penn said.

Although it was the first time Ms. Penn competed in the Miss Ohio USA program, it proved to be a successful endeavor. All contestants first compete in two separate interview segments with the state judges.

“They asked some really heavy questions,” Ms. Penn said of the interview process, noting how the judges touch on controversial topics. “They expect you to have a political opinion.”

While the questions can be intricate, Ms. Penn knew that the important part was communicating effectively. “They are looking for someone who is both open-minded and educated. It’s more about how you answer and if you are able to back your stance up with facts,” Ms. Penn said.

The stage portion of the competition follows, including the swimsuit and the evening wear portions of the pageant. “Not only did I have to prepare mentally, but also physically; so walking on stage felt like a celebration of everything I had worked for,” Ms. Penn said.

After breaking into the top 15 in the competition, and then the top five, Ms. Penn was awarded the title of Miss Ohio USA 2018.

For Ms. Penn, that stage confidence is something she will take with her into her career.

“Now when I have to go into a meeting with any of my managers I’m not nervous. I know I can do this, I work hard, I’m driven, I’m educated. These people are in their positions because they work hard too,” Ms. Penn said.

While getting ready for her next pageant, Miss USA 2018, which was hosted live on the Fox Network, Ms. Penn was taking 20 credit hours, working part time and starting her own business. “My advice to other students would be to be organized and be passionate,” Ms. Penn said.

As Ms. Penn traveled the state to share her platform with others, she spoke to roughly 50 different schools where she went with her beekeeping suit, her honey frames and, of course, her sash and crown. She would spend time with students teaching them about bee keeping and the impact bees have on our environment.

During her school visits, Ms. Penn would also set up workshops to help students get thinking about what their own businesses could be, and showing them how they too can be entrepreneurs.

When Ms. Penn spoke to younger audiences at elementary schools, she said, “a lot of the elementary students maybe didn’t grasp the business aspects, but they loved learning about how honey is made and that bees really don’t want to sting you.”

Ms. Penn will graduate from Kent State Trumbull in the summer of 2019. In November 2018, she passed on her state title to the 2019 Miss Ohio USA, but she said she will always carry the confidence she gained from the experience with her. Currently serving an internship, her goals after graduation include finding a fulltime job to use her business administration degree and growing her honey business.

Although Ms. Penn does not plan to compete in pageants again, she said she would love to coach future pageant contestants, especially for the interview portion. “That confidence transfers into every aspect of my life. I am able to walk into a board room and command attention,” Ms. Penn said.

To learn more about Deneen Penn, visit her Miss USA profile at www.missuniverse.com/missusa/contestant/1000349.