Kent State Volunteers Impact the Lives of Others Beyond Campus

Every other Tuesday, student volunteers from the Campus Kitchen at Kent State University prepare dinner for the residents of the Kentway Apartment Complex, a government-subsidized housing complex on East Summit Street in Kent.

At 5 p.m., residents gather in the dining hall and volunteers serve the meal that is prepared from food donated by Trader Joe’s.

When it is not a dinner night and volunteers are not cooking up grilled chicken, filet mignon or chicken noodle soup – some of the items that have graced the dinner menu – they set up a pop-up market where residents can pick up food at no cost to prepare on their own.

This program, known as Kentway Café, launched with the help of a grant from the American Association of Retired Persons (AARP) and a unique partnership between the Campus Kitchen at Kent State and Kentway Apartments.

“We’re always looking for things to do for them (the residents) to enrich their lives, and with the campus so close, it just seemed there had to be some sort of connection there,” said Jacqueline Flannery, activities coordinator for the apartment complex.

She said the complex houses a mix of individuals.

“We have a lot of military vets here, which is an honor to serve them not even remotely close to how they served us,” Ms. Flannery said

The volunteers, however, are what make Kentway Café a success. Ms. Flannery said their hard work over the past several months has greatly benefited Kentway residents.

Robert Guard is the manager of Campus Kitchen and a recent Kent State graduate with a bachelor’s degree in nutrition, which has helped him with his work. He organizes the day-to-day activities of the charity, ensuring the drivers pick up food on time and team leaders make sure everything runs smoothly.

“I have a makeshift team of up to 20 student volunteers made up of leaders, regulars and newbies,” Mr. Guard said. “I administer the safe preparation and packing of the food in two hours, and then I drive the food over in my Ford Focus to Kentway to serve roughly 50 individuals.”

Mr. Guard said he has cross-trained volunteers to be effective in every role to ensure the program’s success.

Tom Sonnanstine, a student volunteer who is pursuing a double major in biochemistry and psychology, is assisting with food distribution this summer.

“I am able to see the direct impact that is being made by Campus Kitchen’s efforts,” he said. “All of the residents of Kentway are so appreciative of our efforts, making what us volunteers do feel even more rewarding.” 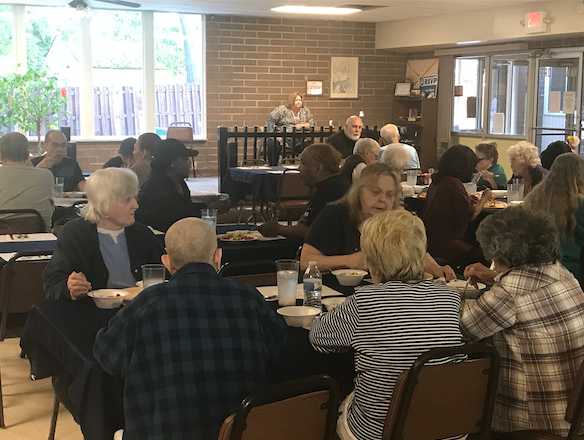 Just as important as the tasty meals at Kentway Café is the fellowship created when student volunteers spend quality time with residents and form valuable relationships, organizers say.

“Many of (our residents) have grandchildren that they don’t see often, so when a student volunteer walks in the door, it’s like they just got adopted by 50 new grandparents,” Ms. Flannery said. “Our residents have taken a great interest in the students and in their activities and in their lives.”

The reverse is true, too, for volunteer Olivia Kimball, a senior nutrition major and Kentway Café volunteer since it began.

“They’re second grandparents,” Ms. Kimball said. “It feels so good to make someone else feel special and important because they are.”

Ms. Flannery said Ms. Kimball is a standout volunteer who has developed a special relationship with several of the residents and consistently checks in with them during the dinners.

Ms. Kimball recalled a time when she was chatting with a resident, Laura, who was describing her favorite jelly. There was just one problem – Laura could not afford to buy the jelly often.

Ms. Kimball discovered the jelly was sold at a stand next to Campus Kitchen and brought Laura a jar on her next visit.

“Laura gave me a hug and said it was probably the nicest thing anyone has ever done for her,” Ms. Kimball said. “It felt great to brighten her day.”

Ms. Kimball recently brought a special birthday treat for Mike, another resident with whom she has developed a friendship. He was overwhelmed by the gesture.

“When you see a grown man who has gone through as much as he has cry because he was thought of, it humbles you,” she said.

Ms. Flannery said residents so look forward to dinner nights, that they will start asking her days before what will be on the Tuesday menu. 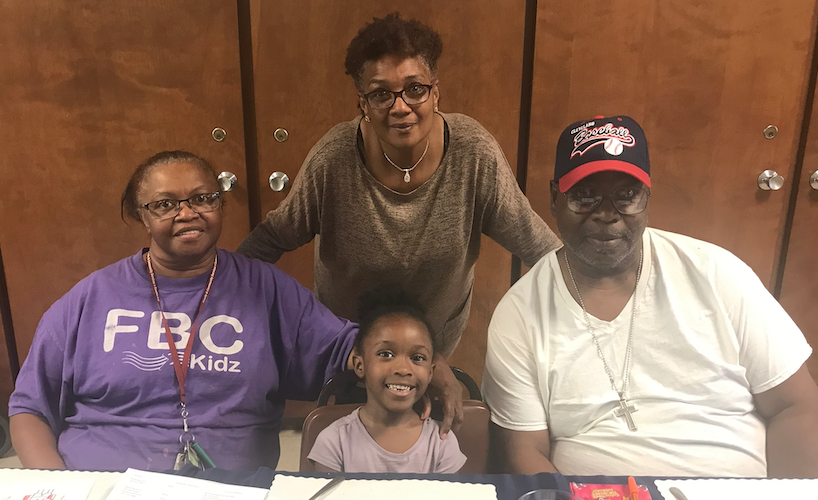 “My favorite dinner was the baked chicken,” said Afeni Daniels, a spunky five-year-old girl who aspires to become a chef and a dance teacher when she grows up.

Her grandfather, Victor Taylor, who enjoys cooking himself, said he is not afraid to give some tips to the student volunteer chefs. He said he is never shy to let the chefs know what is good and what could maybe use some work.

But beyond the food, Mr. Taylor’s wife, Patricia, said the program is about building fellowship with the students and other residents.

“They really take care of us,” she said.

When the program was first launched, it was quiet in the dining hall, but now the Kentway Café is bustling with conversation.

“I make valuable contacts while I’m here,” said resident Timothy Simandl, a regular at Kentway Cafe. As an architectural scholar and history buff, he said he was able to share his passion for drawing and design with a student volunteer who shares similar interests.

The program also includes a Kentway garden project, and soon, Ms. Flannery and other staff members plan to start an activities program so the residents can be entertained while enjoying the meal.

The Campus Kitchen at Kent State is looking for additional volunteers this summer. Anyone interested in volunteering should visit the campus kitchen website.

Who's Cluff and Why Is His Name on Franklin Hall?
From Kent State to the White House And Back
Soccer Tournament Exemplifies International Day of Peace
KENT STATE TODAY
Street Address
800 E. Summit St. Kent, OH 44242