Kent State Was ‘Critical in the Formation of This Family’

A clear intention to pursue social justice led Stuart Chen-Hayes, Ph.D. ’94, NCC, LCPC, to Kent State in 1990 to pursue a doctoral degree in counselor education. What he learned at the university – and what inspired him – significantly changed the course of his life, professionally and personally.

Stuart is a professor and program coordinator of Counselor Education/School Counseling, City University of New York, Lehman College, and the author of the new book “Double Dads One Teen: A queer family's trailblazing life in the USA and Taiwan,” DIO Press, Inc., 2019, the subject of which is the focus of the new documentary “Double Dads and One Queer Teen: My Rainbow Family,” directed by Larry Tung. Both dads and teen recently came to Kent State to share and reflect upon the start of their mixed-race, dual-language, dual-national, two-generation queer family journey that spans two continents.

“I would not have dated or partnered with a man of color let alone married one, I certainly wouldn’t have helped create a mixed-race child, and I sure as heck wouldn’t be working in a 90% person-of-color borough in the Bronx for 22 years were it not for my experiences with Mary Smith Arnold and Anita Jackson at Kent State,” Stuart said.

The late Mary Smith Arnold, Ph.D., an assistant professor of counseling and human development, and another woman of color, Anita Jackson, Ph.D., associate professor emeritus, who became Stuart’s mentor and lead on his dissertation, “were the two best teachers that I’ve ever had,” Stuart said. “They were just extraordinary. They gave me the grounding both professionally and personally. This institution was critical in the formation of this family.” 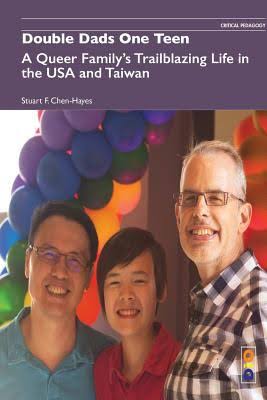 This family story starts when Stuart Hayes, as he was then called, came to Kent State in the fall of 1990. He was an engaged activist, but he says “Kent was really where my activism took off. Coming to Kent State as an anti-war activist, I knew the reputation of the university,” he said. “I thought it was great.”

Stuart, who jokingly calls himself a “failed heterosexual” and identified as bisexual at the time, came to Kent State to be challenged as much as to challenge injustices he saw in the world.

While Stuart Hayes was in Kent, Lance Chen - on the other side of the world - was enduring oppression as a gay man in Taiwan.

“It was very, very conservative,” he said. “Everything was underground. I wasn’t able to be out. People I knew were all very pessimistic about their future.”

Coming to the U.S. from Taiwan in 1990, he was surprised to find different discriminations waiting for him.

“As an Asian foreign student and gay person, going to New York is an eye-opening experience,” Lance said. “I learned about my own identity and also about racism dynamics in the gay community. That’s not something I experienced in Taiwan.”

After Stuart earned his doctorate and returned to his native Chicago, he met Lance through a personal ad. The couple later held their Scottish/English and Taiwanese-themed “illegal wedding” ceremony in 1997 and later moved to New York where they got more involved in LGBTQ activism. They also began to explore opportunities to start a family of their own. After Stuart’s sister offered to be a surrogate for them - which came as a surprise - their eight-year dream of having a child became a reality when Kalani Chen-Hayes was born in 2003.

And thus began a series of firsts detailed in the “Double Dads One Teen” book, a 12-year labor of love and intentionality that chronicles the joys and struggles of an LGBTQ family constantly crossing physical and social boundaries in North America and Asia.

Kalani was born in North Carolina, and after a legal challenge, Stuart and Lance were the first male couple granted an amended birth certificate from the state with two men listed as the parents.

Shortly after Kalani was born, members of the Asian media were trying to find people to interview about the LGBTQ issues in their own countries. Lance was interviewed by Chinese media in New York that had connections to Taiwanese media. “I became the first out gay dad in Taiwan being interviewed in Taiwanese media.”

In the family’s travels back and forth to Taiwan, they were asked to guest lecture and then teach classes. “We became - and I think still are - the only gay couple ever to teach a grad course in Asia, let alone in Taiwan,” Lance said. “We co-taught Taiwan’s first sexuality counseling class bilingually for master’s students.”

Throughout all these legal battles, the family still dealt with questions on airplanes about where the baby’s mother was, questions at gas stations asking, “is that your child,” and strangers at restaurants asking if these men needed help feeding this baby.

Kalani, who came out as gay at age 3 and identifies as queer, nonbinary and pansexual, is Taiwan’s first teen dual national with two dads’ names on both an international birth certificate and an international marriage license. 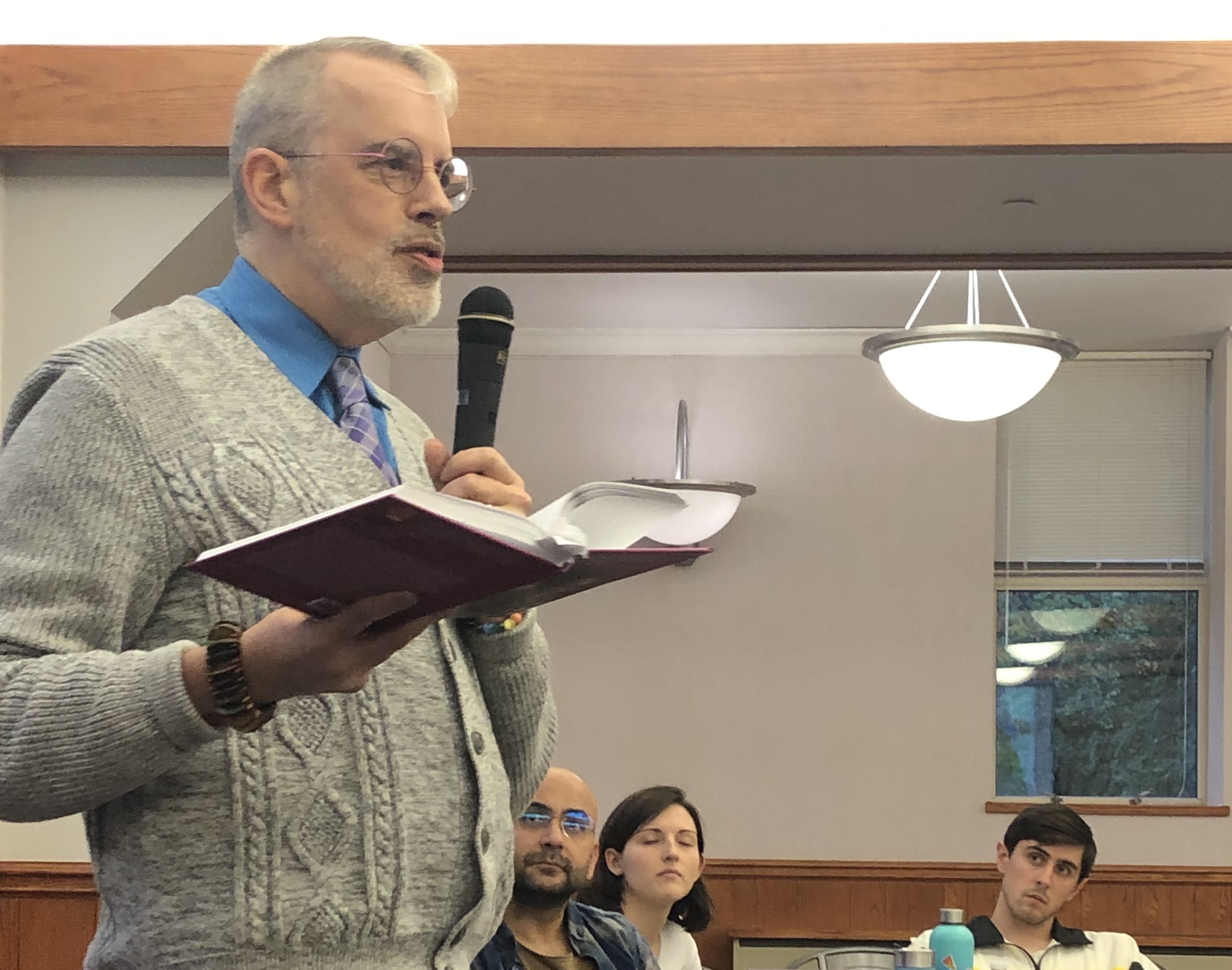 But there is more to this family’s activism than affirming and inspiring the LGBTQ community.

“Having and allowing people to be themselves creates a ripple effect where straight and cis people are able to explore their own identities and figure out what it means for themselves to be straight or cis or a man or a woman,” Kalani said. “Even if they don’t identify as being part of the LGBTQ community, they still benefit from it because they are able to learn more about themselves.”

“There is a statistic on average one out of every two to three people know somebody in their family or friend circle who are in the LGBTQ community,” Lance added. “It’s about someone you know, about someone you care about who may be going through that kind of discrimination and struggle and how we can really help each other for the community’s sake. We’re all connected.”

Stuart, Lance and Kalani spoke about their journey, the book and the documentary to the Kent State community on Oct. 23, sponsored by the Counseling Center at Kent State, the Counselor Education and Supervision program and the LGBTQ+ Center.

“Having Dr. Chen-Hayes and family on campus was amazing,” said Ken Ditlevson, LGBTQ+ Student Center director. “They started the day by doing an informal meet & greet presentation to about 20 guests at the LGBTQ+ Center over the lunch hour and ended the day speaking to nearly 100 students from the Counselor Education and Supervision programs in White Hall. It was meaningful and impactful for many students, who were able to ask questions about starting a family as an LGBTQ+ individual, as well as asking counseling related questions about important tips every mental health counselor should know.”

“We share our stories many, many times in public speaking,” Lance said. “I remember one time somebody made a comment saying that ‘your stories are full of intentionality.’ And that word stays with me. If you think about how we lead our lives. If we really put intention to our lives, it can inspire other people how to live their lives better, fuller.”

And this couple is intentional in what they do. They labored to bring Kalani into the world. They fought and continue to fight for their family’s rights on two continents. They created rituals that both affirm their love and demonstrate their commitments to each other. They developed a special coming out ceremony for their teen. What the future holds for the three of them is anyone’s guess, but one thing is for sure: they will do it intentionally. And that inspires those who meet them to live better, fuller lives.