From Kindergarten to Kent State Graduation: Friends Since Childhood Share the One University Commencement Stage

Every graduation is full of stories of hard work, perseverance and friendship. Some of those stories go back to a first day of class or the first day on campus.

But a few Kent State University friendships started on the first day of kindergarten – or even before – and have been blossoming since. This is the story of two pairs of recent Kent State graduates who have known one another for nearly 20 years. 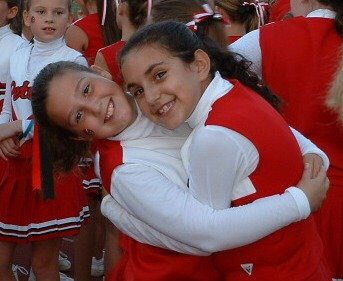 Taylor Doyle, fashion merchandising major, and Rachel Walsh, finance major, have been best friends since kindergarten. They recently walked across the stage at Kent State’s One University Commencement this past May. The two first met in their hometown of Washington, Pennsylvania, when Walsh was encouraged by her mother to “make a friend” in kindergarten by talking to someone.

“When I went to kindergarten, I was really scared, so I asked my mom how to make friends, and she told me to smile at someone,” Walsh said. “The first person I saw, I smiled at. And that person was Taylor.”

As they grew up and began to apply to colleges, both Doyle and Walsh wanted to attend Kent State. ​​​​​​​They explained that having someone to transition from high school to college made the process much easier.

​​​​​​​“Our friendship definitely helped me personally because I was very nervous to leave home and be in a completely ​​​​​​​new place,” Doyle said. “Having someone who knows you so well helped because she always knew when I was having a hard time and knew how to help me.”

Doyle and Walsh have been friends for more than 17 years, and for the first time in their lives, graduation will impose distance.

“I know I can always count on my best friend to be there for me, listen to me, support me and bring me back to Earth when I need it,” said Walsh, who has headed back to the Pittsburgh area since commencement. “But after graduation, Taylor will be moving halfway across the country to Arkansas for her new job, and this is the first time in my life that I’ll be farther than 10 miles from her.”

They both know that regardless of the distance, their established friendship won’t end after graduation. 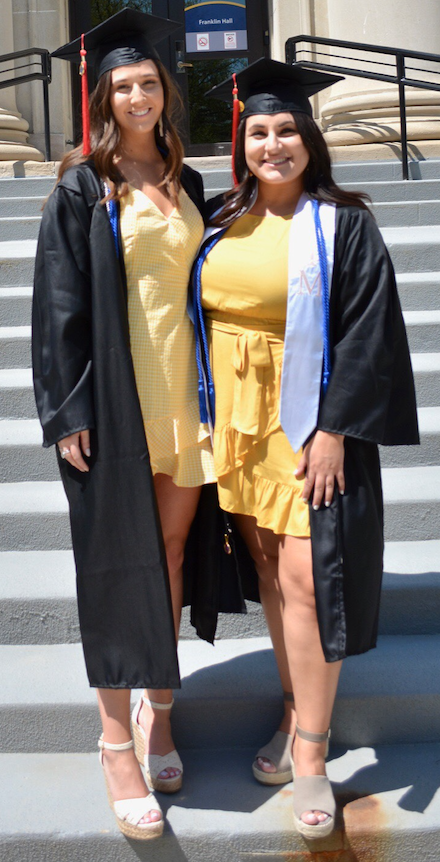 The two have been friends since they were four years old, but their friendship really blossomed their first year at Kent State.

“I went to the University of Colorado Boulder for my first semester, and I was having a hard time transitioning to college,” Recktenwald said. “About halfway through my first semeste​​​​​​​r, I started looking at different schools. Kent State stood out to me because of the public relations program. I knew I would have a close friend (there) to help me through my struggles.”

Recktenwald explained that the two spoke on the phone, texted and video chatted every day to talk about college and how they were adapting to their new environments. When Recktenwald transferred to Kent State, she knew that having her closest friend to experience these college years with was the best decision she could make for herself.

“Looking back on these 18 years, we have gotten each other through so much, and now we got to graduate college together,” Recktenwald said. “My college experience would have been missing so much laughter and joy without her.”

Abraham agreed that their friendship was something she needed and relied on for her college career.

“Our friendship has lasted so long because we have made an effort to remain in each other’s lives,” Abraham said. “We both had a rough transition into college, but we have always focused on being there for each other and making sure we have a blast while we’re together.”

They also shared that the key to their lasting friendship was trust, respect and open communication. Both pairs of friends explained that their friendships lasted because of their push to stay close, listen to each other through their ups and downs and make the most of their four years at Kent State.

They know they can rely on each other – no matter the distance – as their new adventures begin.

PHOTO2: Devon Recktenwald (left) and Samantha Abraham (right) on the steps of Franklin Hall before graduation.