Skip to main content
Live Chat
Carrie Esser used water-based body paint to turn herself into a “queen bee.” Her artistry landed her in the second round of the NYX Cosmetics 2018 Face Awards USA.

Carrie Esser paints herself, demonstrating the contrast between life and death.

Every stroke of the makeup brush reveals Carrie Esser’s passion for self-expression.

Passion, Purpose and the Power of Paint

Perhaps the most surprising thing about Kent State University student Carrie Esser is that she is not an art major.

The 21-year-old from North Royalton has been gaining a reputation for her makeup and body painting business, Makeup Madhouse, which has an Instagram following of more than 12,800.
Ms. Esser will be starting her senior year in August 2018 majoring in entrepreneurship in Kent State’s College of Business Administration.

She is used to the surprised looks that she gets when she explains that she is not studying art.

Ms. Esser loves to paint, but art is a talent she already had cultivated on her own. She wanted to learn how to turn her talent into an enterprise.

“My dad always said, `If you choose a job you love, you won’t work a day in your life’,” Ms. Esser said, explaining that her goal is to operate her own makeup and body-painting business.

“I want to turn what I already know how to do into a business. Having that business degree was really important to me,” she said.

She never considered any university but Kent State. She visited the Kent Campus while still in high school and immediately was attracted to the university. After touring the business college, and learning about the entrepreneurship program, she knew Kent State was for her.

“I loved the school as soon as I toured it. It’s my second home, my happy place,” Ms. Esser said.

In high school, she took just a required art class, and at Kent State has taken a class in makeup for stage and screen, and also a wig and makeup class. 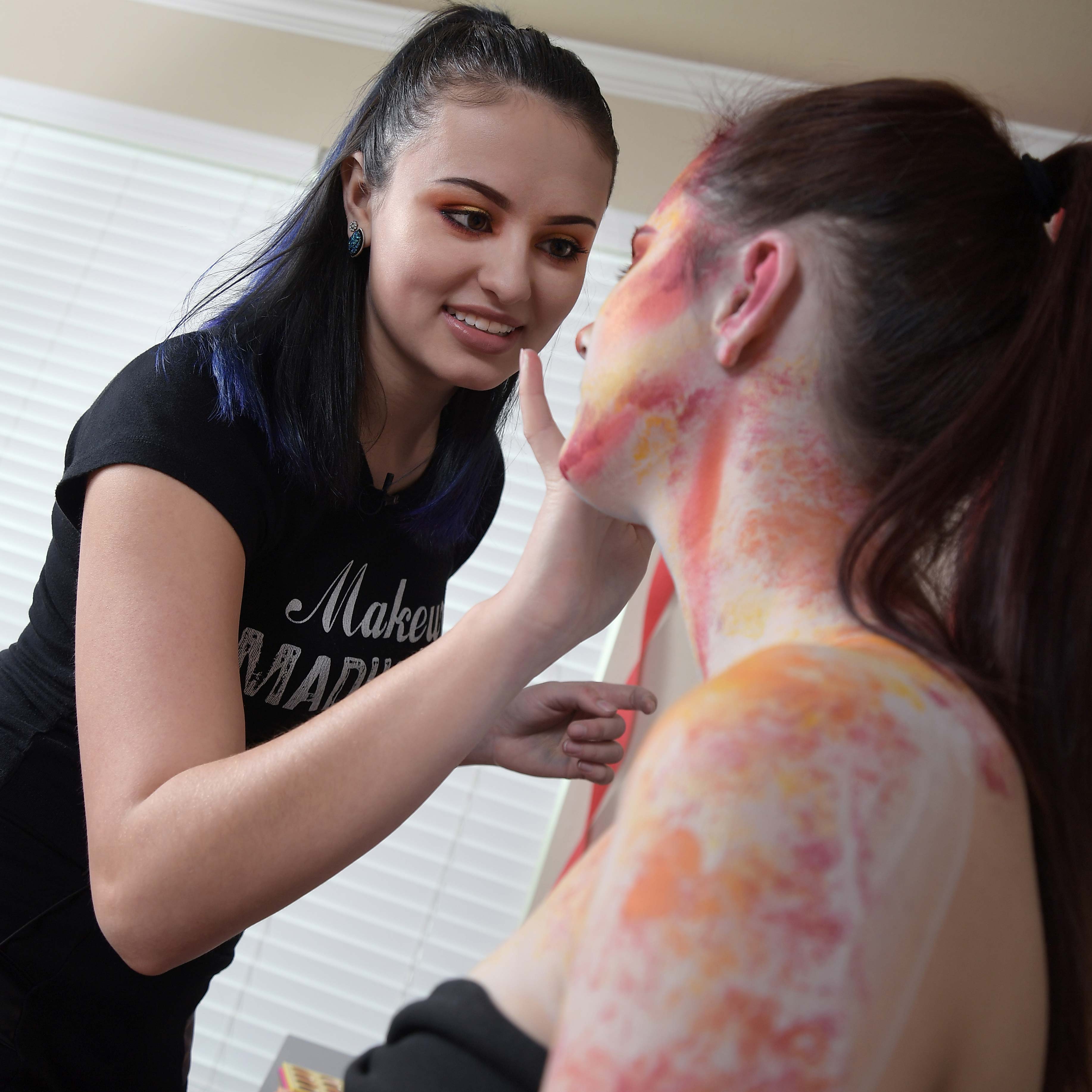 Currently, she has advanced into the Top 12 of the FACE Awards national competition.

Ms. Esser was selected one of 30 contestants for the awards based on her initial submission entitled, “Killer Queen,” in which she made up herself to look like a queen bee. Judging criteria included creativity, value of the accompanying tutorial video, makeup artistry, quality of production and overall presentation.

The 30 contestants then received their first challenge: A video to show their interpretation of what the power of makeup means to them. Those videos were posted online for voting, with the top 20 vote-getters advancing to a second challenge round.

Through a series of makeup challenges the field of contestants will be whittled down from 20 to 12, and then from 12 to six before the winner is announced on Aug. 25.

The second challenge was announced June 4, and the finalists had two weeks to create videos of their makeup presentation of a machine. Online voting took place from June 15 to 21.

"Having the support of Kent State is incredible," she said. "I'm so grateful to have an amazing school to have my back."

Ms. Esser said she entered in contest in 2015, but was not selected as a contestant. Since then her makeup skills have improved along with her ability to make videos, she said. 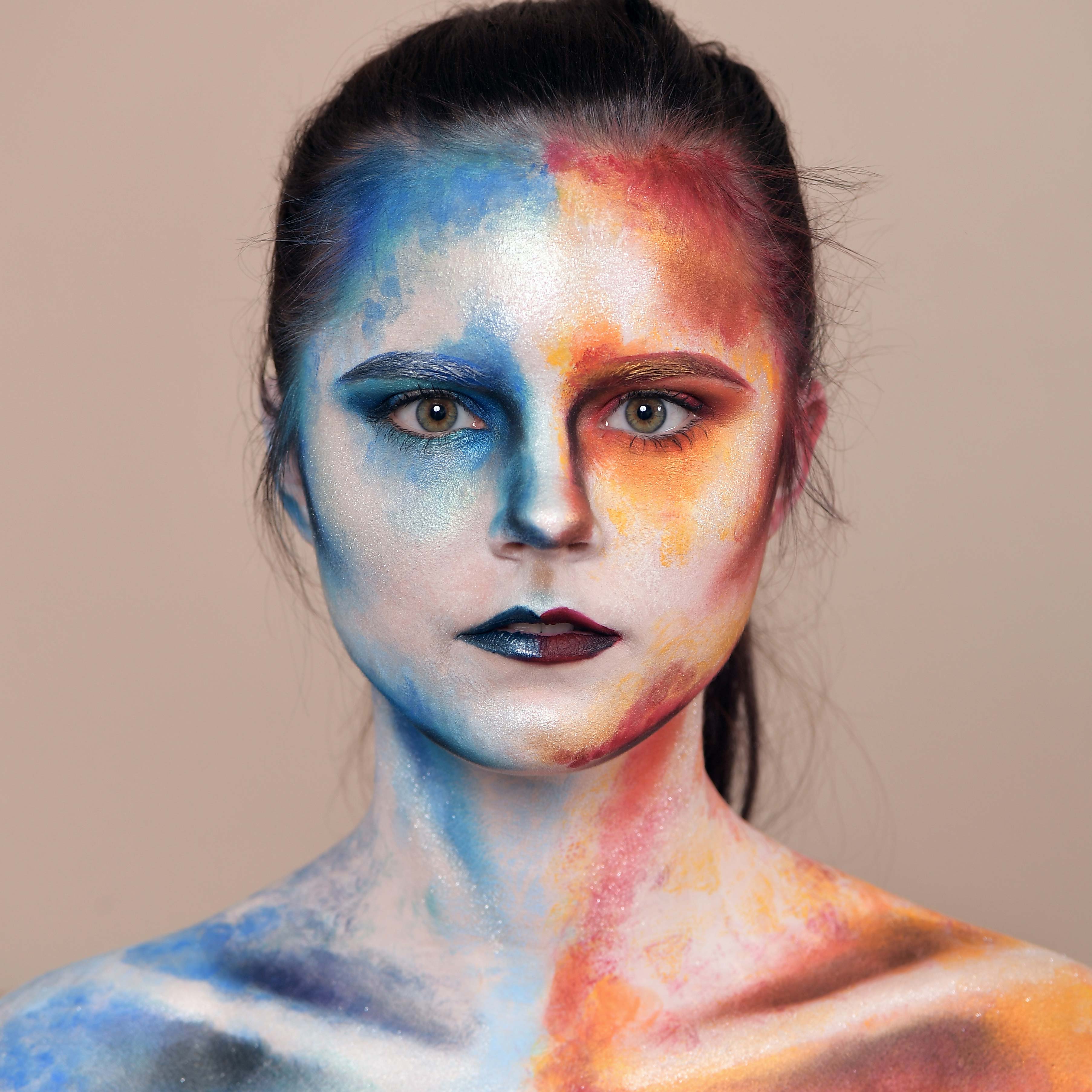 Ms. Esser was in high school when she discovered her passion for self-expression on the canvass of the body. She started out the way many teenagers do, experimenting with eye shadow and elaborate eye makeup.

Then, one Halloween during her junior year of high school, she decided to paint herself as a sugar skeleton and her reputation as “the body-painting girl” was set.

Ms. Esser typically works on herself or friends who volunteer to be her models, using water-based body paints that wash off easily.

Her colorful, eye-catching work ranges from whimsical to macabre, and allow her subjects to be clothed in paint.
She has tried painting on canvas, but found it too easy to put down. “With body painting I have to finish in one sitting. It forces me to get it done,” she said. When working on herself, Ms. Esser uses a mirror to create the images – she has trained herself, essentially, to paint backwards.

Thanks to attention she has gotten through her website and Instagram account, some paying jobs have come her way over the past year. Ms. Esser then photographs her subjects once their makeup and body painting is complete.

“I do a lot of pregnant tummies,” she said, adding that at Christmas time she painted three sisters, which one sister purchased as a gift for the other two.

Being clothed only in paint, is “a very liberating experience, very freeing,” for her subjects, she said.

Ms. Esser was hired to paint the performers at a ball for the American Heart Association and has done the makeup for some projects for art and fashion students at Kent State. Most recently, she has started offering her services for children’s birthday parties. 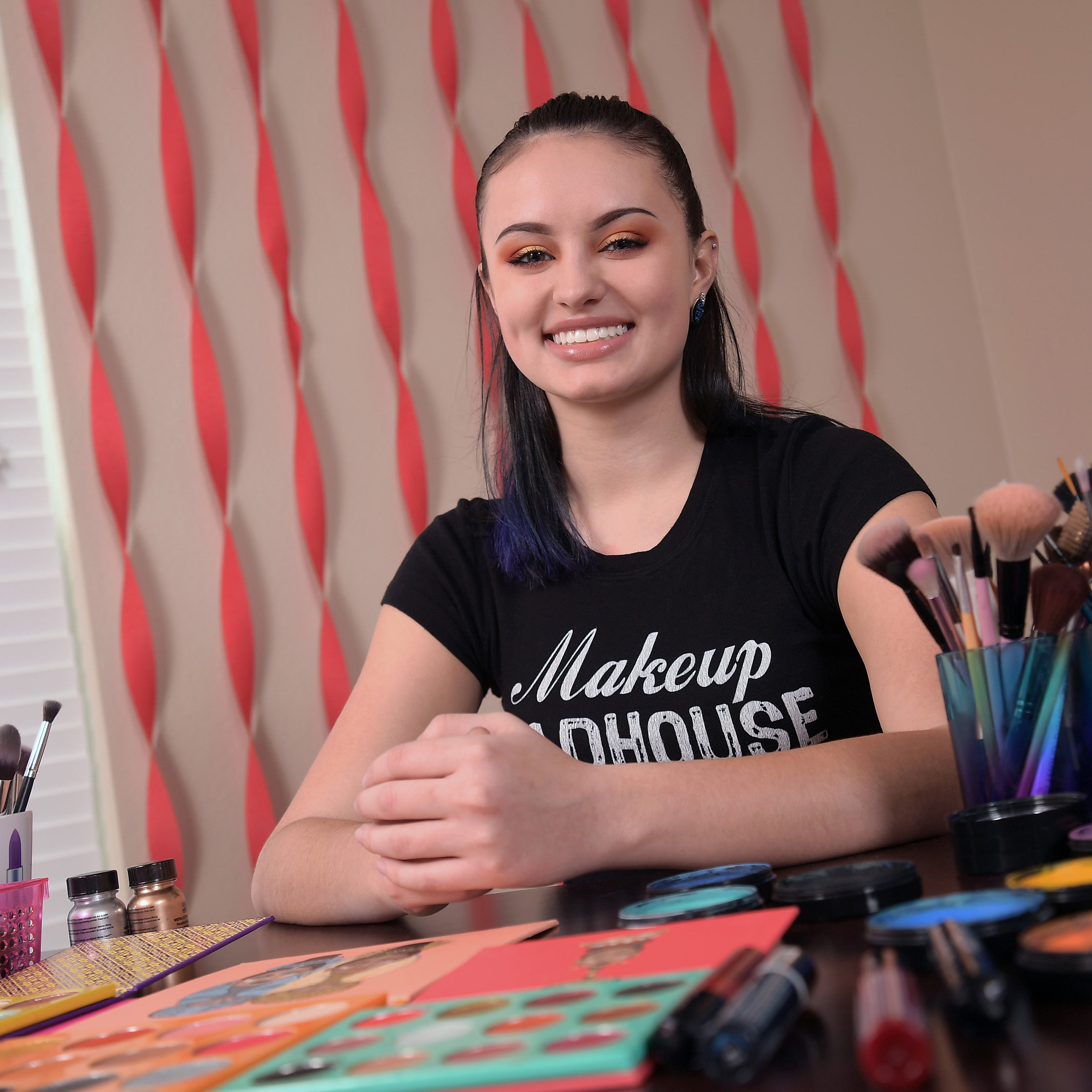 After graduation, her goal is to move to California to build her own makeup and body-painting business. She believes the entertainment industry would provide a larger market for her work.

“My absolute dream would be to work with celebrities or musicians or artists for creative photo shoots,” Ms. Esser said.

Her style of body painting, she believes, would work well for music videos or events such as fashion shows.

As a business model, she would like to manage a team of artists, to send out on assignments.

Working on movies or television shows has its appeal, but Ms. Esser said that she hopes her work will include diverse jobs so that she does not end up applying the same makeup day after day.

In October 2017, Ms. Esser challenged herself to paint herself every day and to post a photo of a new design for each of the 31 days.

“It was a big project and I’m very proud of it,” she said. The October series also helped to increase her social media following.

At one point, Ms. Esser was in the pipeline to be a contestant on Skin Wars, a reality television show on GSN, featuring competing body-painting artists, but the show was canceled before she could appear.

Ms. Esser said she continued to body paint and experiment with makeup because she got such positive feedback when she started. “It really inspired me to keep doing it,” she said.
Her favorite work so far, hangs framed in the bedroom of her apartments, entitled “Life and Death.”

The photo is actually two separate photos framed together to appear as one, with her appearing as a skeletal death on half and flowering life on the other.

Ms. Esser said she sketched out the work one summer while working for her father’s manufacturing company, spending most of her day sitting in a cubicle entering data into a computer.

“I was sketching it out while I worked,” she said, noting how the death side of the painting reflected her life in a cubicle at the time: “It’s definitely not my thing,” she said.