A former Orange County, Florida, homicide detective and a United States Army veteran, Voyles has been patrolling campus since 2014.

When he’s not working to keep the Kent Campus safe, Voyles can be found in the classroom where he works as an adjunct professor teaching Story for Film for the digital media production major in the School of Media and Journalism within the College of Communication and Information.

Now, the 51-year-old is adding the title of author to his resume, having self-published his first novel, “Soldier’s Heart, an Evin Walker Thriller.” The book is available for purchase through his personal website or through Amazon.com.

Voyles’ road into writing was far from a straight path.

He was born and raised in Panama in Central America, where his father worked as a police officer and warden of a federal penitentiary. His family moved to Florida when Voyles was 12, and after graduating high school, Voyles joined the Army. He served for eight years in the U.S. and abroad working as an Arabic language translator, before returning home to Central Florida to continue his education.

After earning his bachelor’s degree in creative writing from the University of Central Florida, Voyles had intended to start writing about his time in the military, but life had other plans. Newly separated from his wife and struggling to make ends meet, Voyles had the opportunity to go on a ride-along with an Orange County sheriff’s deputy, and the opportunity to become a police officer presented itself. Voyles was eager to be back in uniform serving his community and the job enabled him to live near and provide for his 3-year-old daughter.

Voyles never stopped considering himself a writer despite his move into law enforcement and said his police work put his storytelling skills to work in ways he never expected.

“My favorite part of police work is the amount of storytelling happening on the scenes I investigate,” Voyles said. “It’s almost like improv. You have to deal with whatever is happening, find people where they are and form yourself into a person who can help them.”

Voyles, who spent 12 years working as a detective investigating homicide and sex crimes in the Orlando area, said the different personality styles that he used to deal with various criminal circumstances eventually became characters in his head.

“It was as if the storytelling continued, and I still hoped for a future in writing,” he said.

Voyles went back to school and earned his master’s degree in creative writing, and, in 2012, began teaching Introduction to Screenwriting and Creative Writing at the University of Central Florida in Orlando.

Eventually, Voyles made his way to Ohio, when his wife, a Canton native, wanted to return home; he joined the KSU police in 2014.

Voyles said he was happy to relocate and loves the Ohio climate and the change of seasons that he never experienced living in the extreme heat of Central Florida. “It’s just gorgeous,” he said.

At Kent State, a whole new set of creative writing possibilities began presenting themselves to Voyles. While providing security in the Design Innovation Hub for a Cleveland filmmaking competition, he struck up a conversation on the set with a digital media professor who encouraged him to consider teaching screenwriting at Kent State. He was hired to teach a class on Story for Film the next semester. 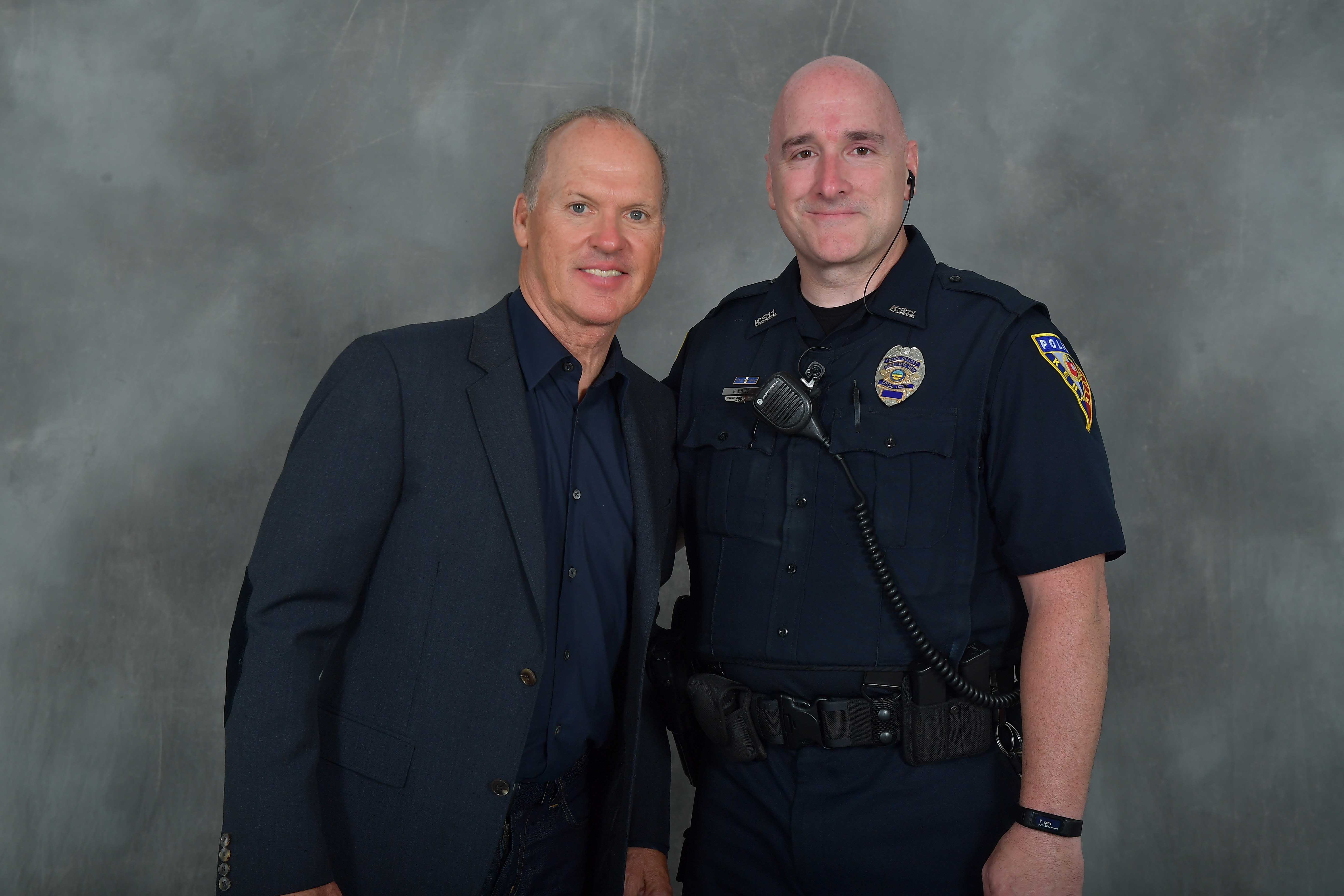 When actor and Kent State alum Michael Keaton spoke at One University Commencement in May 2019, Voyles was able to give the actor a copy of a movie script he had written. Keaton read it, and in January 2020 contacted Voyles with words of encouragement to pursue the screenplay.

Instead, he decided to turn the script into a novel, which he recently self-published.

The lead character in the book, Evin Walker, is a female veteran who returned home from Afghanistan missing part of her leg. An aspiring tattoo artist, Walker’s unsteady nerves and shaky hands result in her taking a job driving a bus in Cleveland. One day she notices something suspicious on her bus, and the thriller plot ensues.

The book also addresses Walker’s journey dealing with post-traumatic stress disorder and the negative impact it can have on personal relationships. “She’s a very tough character,” Voyles said, noting that he already is working on a second Evin Walker thriller.

Voyles said he draws on his own experience in the military and working as a criminal detective for story ideas but opted to use a female character as the protagonist for this story.

“Most of my stories are from the female perspective,” he said. Voyles said he is drawn toward female characters because of the way it is more socially acceptable for females to express a wider berth of emotions.

“I guess maybe I am more in touch with my feminine side,” he chuckled, “Maybe it has something to do with having two moms, a wife, an ex-wife, two sisters and two daughters.”

Even though Walker is not a very delicate female character, Voyles said writing from a woman’s perspective allows him, “to make fun of myself and men in general.”

For the 2022 Fall Semester, Voyles will be back teaching Story for Film, which is an introduction to screenwriting course.

“Writing was always my first love,” he said, “I love writing, I love talking about writing and I watch a lot of television and movies. So, while working in law enforcement is rewarding, it’s a lot easier to reach the students when you are teaching something you love.”