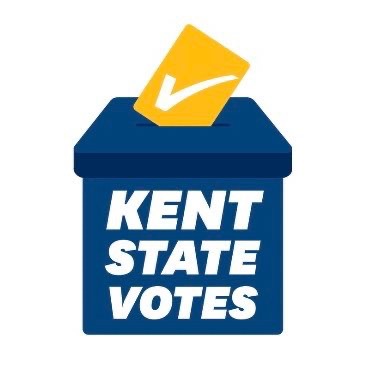 While student voting nationwide doubled since 2014, the Kent State University student voting rate has increased 135% from 2014 to 2018, according to a recent report from the National Study of Learning, Voting and Engagement, conducted by the Institute for Democracy & Higher Education at Tufts University’s Tisch College of Civic Life.

“We are thrilled to see such a large increase in both the voting and registration rates of Kent State students,” said Craig Berger, assistant director of Kent State’s Community Engaged Learning. “It’s important for students to vote because it’s the entryway into getting further involved in the community. Voting is a way for you to express your opinion, every now and then about the direction of your local community, the national community and the direction of our city, state and country.”

Kent State works closely with the local community and student organizations to provide students the education, experiences and support to become engaged citizens living lives of impact, now and in the future.

In 2018, Kent State launched Kent State Votes, an initiative to register students to vote, educate potential voters about candidates and issues that would appear on the ballot, and provide students with information about voting locations and hours. As a result, Kent State was designated as a Voter Friendly Campus for 2019-2020.

“Becoming a Voter Friendly Campus required there was a plan put in place,” Berger said. “It really forced the different groups under the umbrella of Kent State Votes, including student organizations, community groups or staff members, to sit down and talk. We discussed how we can use our different connections and strengths combined, to support the whole student body.”

“Our Undergraduate Student Government (USG) has really taken it upon themselves to take responsibility and coordinate Kent State Votes,” Berger said. “USG is coordinating a group of students, staff and community organizations and putting further plans into action. With more student involvement and more energy coming from USG, I’m really optimistic about the work that is going to be done in the next year leading up to the 2020 election.”

“I am excited by the results of this study, and I look forward to further increasing voter registration and turnout among students over the course of the next academic year,” Moore said.

Kent State also has student organizations interested in social issues that want to study or act on social challenges in the community, students who are involved in service organizations and groups focused on politics, such as the College Republicans or College Democrats.

“Kent State has a proud tradition of being involved,” Berger said. “Students are part of an atmosphere where they work together and solve problems, so this kind of civic engagement and civic involvement really isn’t a surprise to me.”

Leading to the upcoming presidential election, Berger explains that they expect to see another increase in student voting.

“As far as a number to shoot for, given that we typically see increased voter rates in presidential election years compared to midterm elections, we would like to see 50% voting rate throughout our student body in 2020,” Berger said.

To register to vote in Ohio, visit https://libguides.library.kent.edu/voting/ohio-registration.

To learn more about voting on campus, visit https://libguides.library.kent.edu/voting.