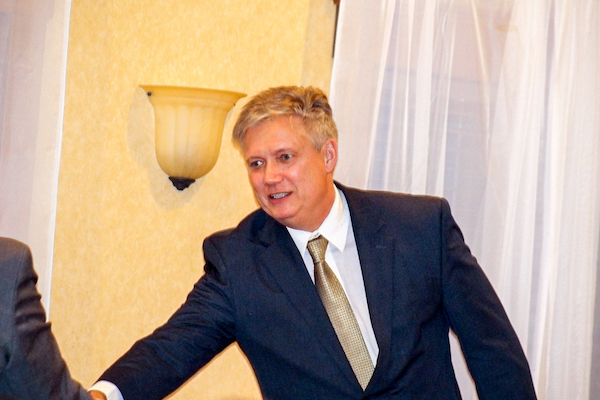 A key leader in the community and a key player in economic development, Kent State University at Tuscarawas received the Large Business of the Year award from the Tuscarawas County Chamber of Commerce.

“We have been involved heavily this year in the community and I think a lot of good stories have come out about the campus either in traditional or social media,” said Brad Bielski, Ph.D., dean and chief administrative officer of Kent State Tuscarawas.

The award was given at the Tuscarawas County Chamber of Commerce’s annual awards banquet held in January at the Schoenbrunn Inn and Conference Center.

“I think the chamber really felt like this was a special year for the campus for a number of reasons,” Dean Bielski said.

In 2018, Kent State Tuscarawas worked on a collaborative project with local career centers, economic agencies and the chamber of commerce to provide training skills for workforce development in multi-county regions. The Ohio Economic Development Association recognized the campus effort as the workforce development project of the year.

Not only is the campus a major contributor economically, but Kent State Tuscarawas’ enrollment growth is “bucking national trends,” Dean Bielski said.
The campus has almost completed its gateway project which is a new entrance opening up land for additional growth and expansion.

“I think all of those types of things happening and occurring this year lead the chamber to say that the campus is a key player in economic development and a key leader as a large business in the community,” Dean Bielski said.

The award is incredible recognition, which reinforces how much of a special year it has been for Kent State Tuscarawas, the dean added.