Advocates gravitate to DC in the name of science 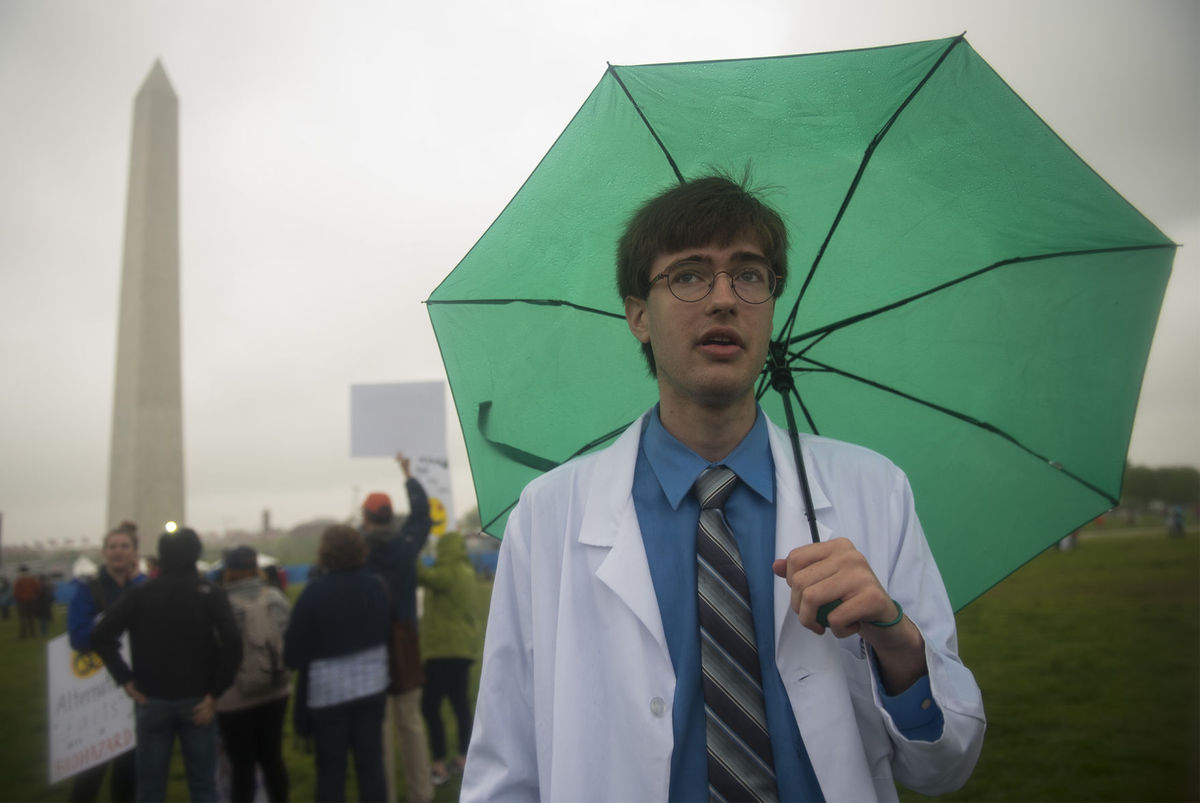 Thousands of marchers dressed in lab coats and brain hats carried pro-science messages as they gathered in the rain at the National Mall in Washington, D.C., Saturday morning with a common goal: inform the public that science matters.

The March for Science was the first of its kind. Its mission is “to unite as a diverse, nonpartisan group to call for science that upholds the common good and for political leaders and policymakers to enact evidence-based policies in the public interest,” according to the event’s website.

Among the crowd stood members of Kent State’s Wick Poetry Center, who handed out poems to encourage readers to think about the concept of science and how it has to do with everyday life.

“The use of poetry with science can help strengthen that communication — the communication that tells us we need science,” said David Hassler, director of the Wick Poetry Center. “(Attending the event) is an invitation to use poetry as a way to engage people in meaningful conversation in the subject of science and the wonder ... The imagination that science has provided us.”

Hassler said Jane Hirshfield, an environmentalist spokesperson and poet, invited the center to become a partner of the march — the only organization from Kent State to partner with March for Science.

“By bringing poetry to people’s everyday lives, we can use poetry as an effective tool to engage our community in conversations that are important,” Hassler said. “You could have poems about climate change, poems about conflict resolution … No matter what we write about, it’ll help communicate to people that these topics have an effect on all of us.”

The center had its own tent — “Poets for Science.” Six-foot-high banners adorned the outside of the tent, each one with a poem pertaining to a different area of science. Volunteers from the center also handed out miniature signs with poems enscripted on them for the marchers.

Inside the tent, participants could create their own signs; the volunteers from Wick handed out pieces of papers with typed out speeches from key note speakers. Each person highlighted words that popped out to them the most, such as “protection,” “environment” and “care.”

Participants then put the words together to form their own poem and write it on a piece of paper as their marching sign.

“This is how we really engaged our audience,” Hassler said. “It really makes the connection between poetry and science even stronger, and also let’s them have some fun while doing it.”

Jessica Jewell, academic program director of the Wick Poetry Center and Kent State alumna, said it means more than ever for her to be at the march.

“Science is the poetry of the world,” Jewell said. “Almost everything in our lives have to do with science and hopefully sharing those concepts through poetry will better inform and engage people.”

Around 10 a.m., keynote speakers and live bands took the stage, which stood next to the Washington Monument facing The White House. Speakers emphasized the importance of being an advocate for science and protecting it, no matter what may happen to agencies such as the Environmental Protection Agency (EPA).

Bill Nye, a mechanical engineer known for his “Bill Nye the Science Guy” education videos, took the stage and called on lawmakers to change policies.

“Without scientifically literate citizens the United States, any country in fact, cannot compete on the world stage. Yet today we have a great many lawmakers — not just here but around the world — deliberately ignoring and actively suppressing science,” Nye said. “Their incarnation is misguided and in no ones best interest. Our lives are in every way improved by having clean water, reliable electricity and access to electronic global information. Each is a product of scientific significance.”

Joe Higgins, a Cleveland native and employee at the Cleveland Metroparks, said the policies being enacted by the government affects multiple areas of science.

“To the people who are making restrictive policies, I’m telling you that we won’t be silent. We need science,” Higgins said.

Higgins referenced the proposed budget cuts to the EPA by President Donald Trump’s administration. The agency issued a proposed plan in March that would lay off a quarter of its employees and dispose of programs — such as pesticide safety and water runoff control — in order to abide by the budget cuts, according to the Washington Post.

Aside from the music and speakers, bright pink hats popped up all around the crowd — brain hats. These hats, created by Leslie Chisnell, are in relation to the cat-eared pussy hats used in the theWomen’s March in January.

Kevin and Leslie Chisnell, residents of Waynesboro, Virginia, wore the brain hats proudly and said the hats not only represent science, but are a message for people to use their brains.

After the rally ended, marchers took to the streets around 2 p.m. and made their way to the Capitol Building chanting “Hey hey, ho ho, science is the way to go!”

Along with Higgins was Kent State alumni Vince Siciliano, who stood in the constant rainfall along with thousands of others.

“To be honest, I don’t know much about science. But what I do know is that it affects everyone,” said Siciliano, who graduated in 2005. “That’s why we are here. It affects you, whether you want (it) to or not. It’s time to get informed and start a conversation.”