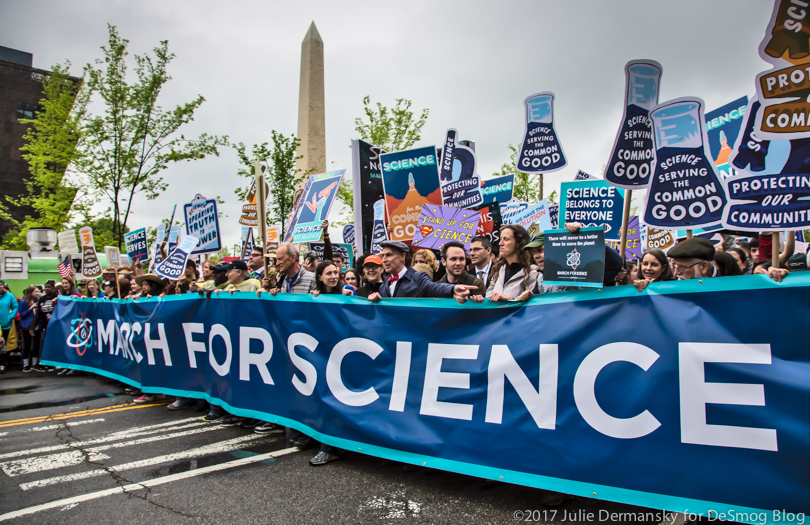 On Earth Day, tens of thousands turned out for the March for Science in Washington, D.C., despite the rain, celebrating ideas, facts, and empirical data while chastising climate science deniers.

Celebrity science educator Bill Nye, honorary co-chair of the March for Science, told the crowd, “We are marching today to remind people everywhere, our lawmakers especially, of the significance of science for our health and our prosperity.” The crowd roared their approval when he said they “could change the world.” 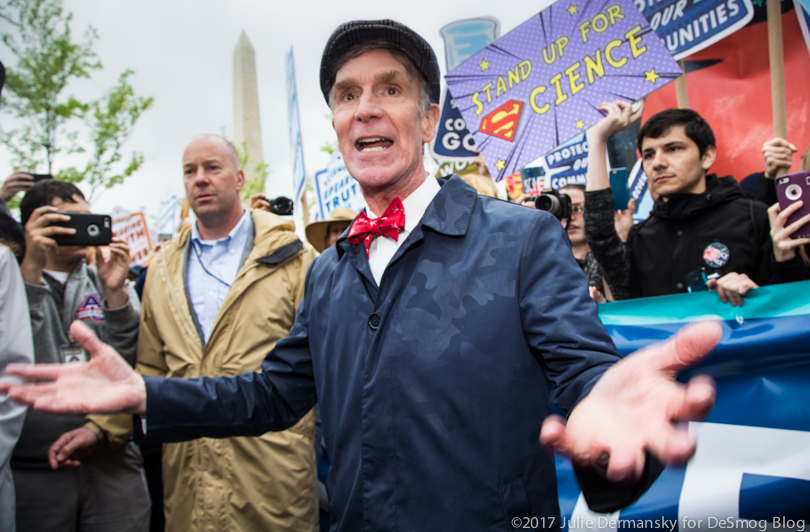 Before the March for Science started in Washington, D.C., Bill Nye tells the marchers that they have to power to change the world.

The seeds for the March for Science were planted at the Women's March in Washington, D.C., the day after Donald Trump’s inauguration. The suggestion that what was needed next was a march for science spread on social media like a weed, culminating in over 600 official satellite marches on Earth Day, all around the world.

The march organizers called on “political leaders and policymakers to enact evidence-based policies in the public interest.” They asserted that:

“Anti-science agendas and policies have been advanced by politicians on both sides of the aisle, and they harm everyone — without exception. Science should neither serve special interests nor be rejected based on personal convictions. At its core, science is a tool for seeking answers. It can and should influence policy and guide our long-term decision-making.” 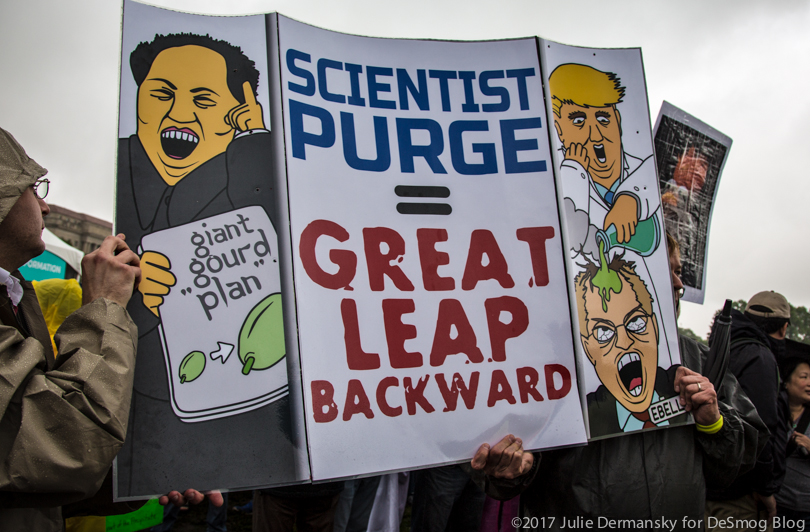 One of the many anti-Trump signs in the mix at the March for Science in Washington, D.C. 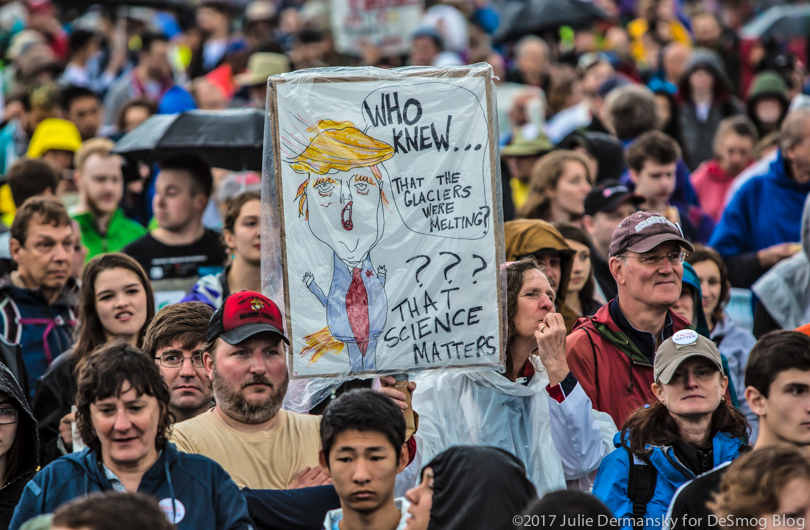 Man holding a sign pointing fun at Trump’s climate denial stance at the March for Science in Washington D.C.

While the march wasn’t about politics, per se, many of the marchers' signs were. One said, “Mar-a-Largo won’t be around much longer thanks to Trump’s lack of action on climate change.” Another suggested regulations for eliminating Trump’s toxic comments.

The march and rally included science supporters as well as scientists. Those I spoke with were quick to explain their love of science and concern about climate change denial. Countless signs shared verbal and visual messages reflecting these issues.

Elise Filipowicz with her family, checking out the “teach-in” tents on the National Mall where science classes were held. 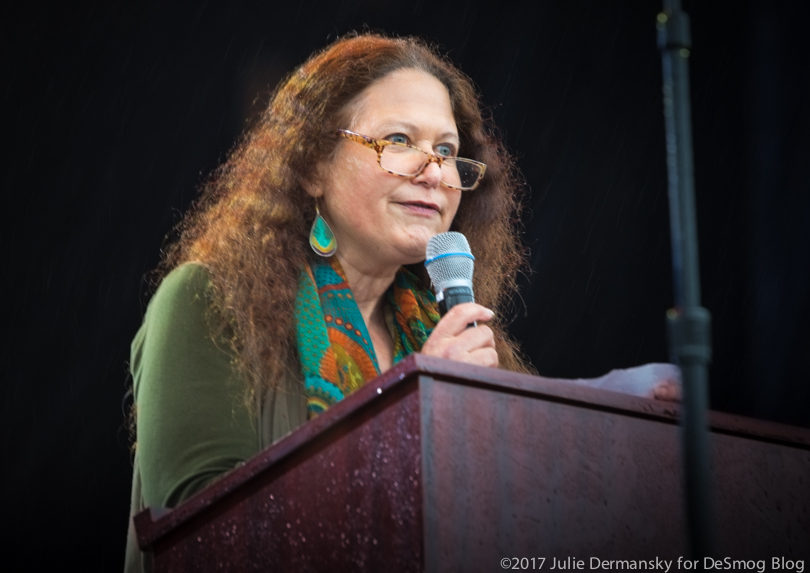 Poet Jane Hirshfield, speaking at a rally before the March for Science in Washington, D.C.

Pointing to the common ground between poetry and science, poet Jane Hirshfield composed a poem for the March for Science, which spoke to the threatening political climate in which science and society currently are operating:

“The facts were told not to speak

and were taken away.

The facts, surprised to be taken, were silent.”

David Hassler, director of the Wick Poetry Center at Kent State University, set up a Poets for Science tent on the National Mall near others where science teach-ins were held. This last minute addition to the teach-ins fulfilled a request by Hirshfield, and Hassler spoke to me about the connection between the arts and science. “The two are inseparable,” he said, both stemming from inspiration. 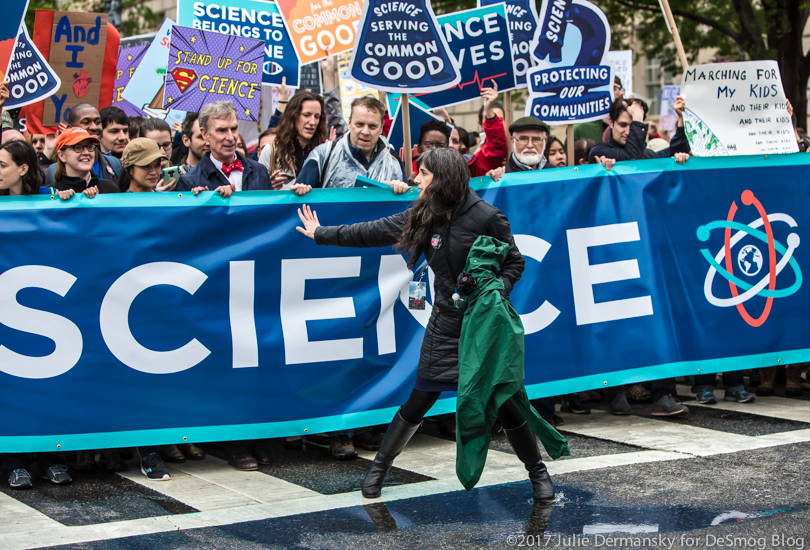 Beka Economopoulos guiding the March for Science along Constitution Avenue in Washington, D.C., on Earth Day.

Before the march, I interviewed Beka Economopoulos, co-founder of the pop-up educational initiative known as The Natural History Museum and one of the march’s national organizers. “We have taken a quantum leap forward as far as  the role of science in society and the public sphere. It used to be the case science institutions wouldn’t touch advocacy or politics with a 10 foot pole, but the question of the politicalization of science? That ship has sailed. Science has always been politics,” she said.

Economopoulos was blown away by how many scientists and science institutions are saying, “We have to speak out” and “We have to stand up for science that stands for the common good.” She applauded the avalanche of articles debating science’s role in politics which have been published over the last few months.

“People are championing evidence-based policy, basic research, and science as the pursuit of truth,” she said. “But climate science, medical research, the very kinds of science people care about are on the chopping block. These attacks on science are attacks on our families, our communities, and our collective future.”

As for the role of science in politics, Economopoulos says science and politics have always been intermingled. She cited science historian Naomi Oreskes' keynote speech at the American Association for the Advancement of Science (AAAS). Economopoulos said that, according to Oreskes, history shows that when scientists have spoken out politically and engaged in activism, it didn’t damage or undermine their credibility or the legitimacy of their scientific claims.

People brave the damp weather at the March for Science in Washington, D.C. 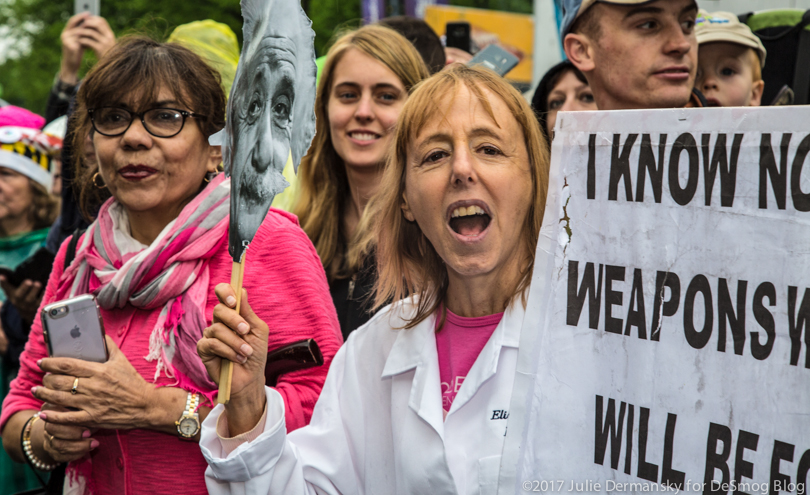 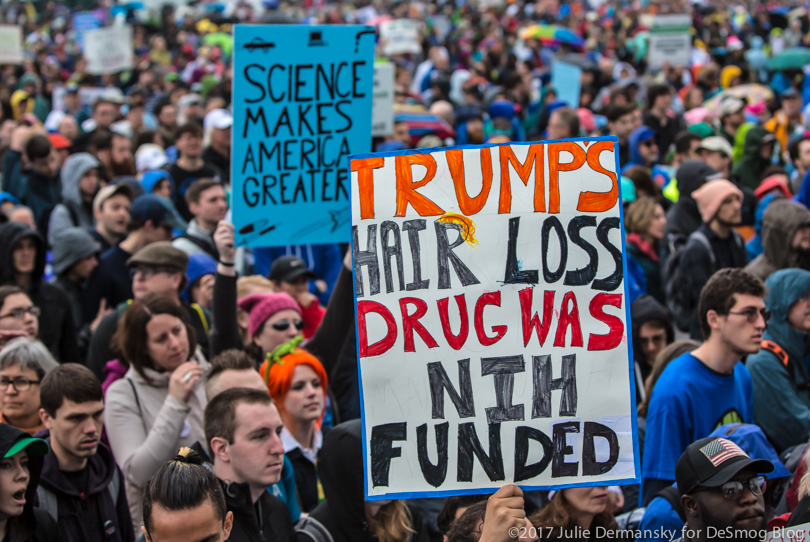 A sign from the march in D.C. listing the government-funded National Institutes of Health (NIH) and one of its products.

Economopolous went on to list prominent examples of scientists who did not stay silent when their pursuit of science intersected with politics:

“Einstein, who spoke out about nuclear weapons, Galileo and Rachel Carson — these are figures who were very engaged in politics and the public arena. They are titans in terms of human understanding of the natural world and ourselves and the universe, so this claim that by engaging in activism you are undermining the scientific enterprise has no basis in reality.”

The honorary co-chair of the March for Science, Mona Hanna-Attisha, was chosen because she is an example of a “scientist who speaks truth to power,” Economopoulos said.

Hanna-Attisha is director of the Michigan State University-Hurley Children’s Hospital Pediatric Public Health Initiative. She was the scientist who proved that Flint, Michigan, had lead in its water. She stood up to numerous EPA scientists who said everything was fine.

“That took courage,” Economopoulos said. “Trailblazing scientists who came before her and those who are operating today are our heroes. They are performing science that serves the public good and pursues truth on behalf of the people and the planet.”

Economopoulos celebrates all those who shine a spotlight on truth, including members of the media and activists who buck assumptions made by the Trump administration.

Maybe the message from the science marches across the country got to Trump. Usually when he feels slighted, he lashes out on Twitter, but on the Sunday after, his feed made no mention of science.

My most telling encounter at the March for Science was with a toxicologist with the Environmental Protection Agency (EPA). She was standing outside one of the teach-in tents, keeping a watchful eye on her daughter. When I asked her about anything connected to the EPA, she stopped me short and refused to comment, her silence a sign of the times. 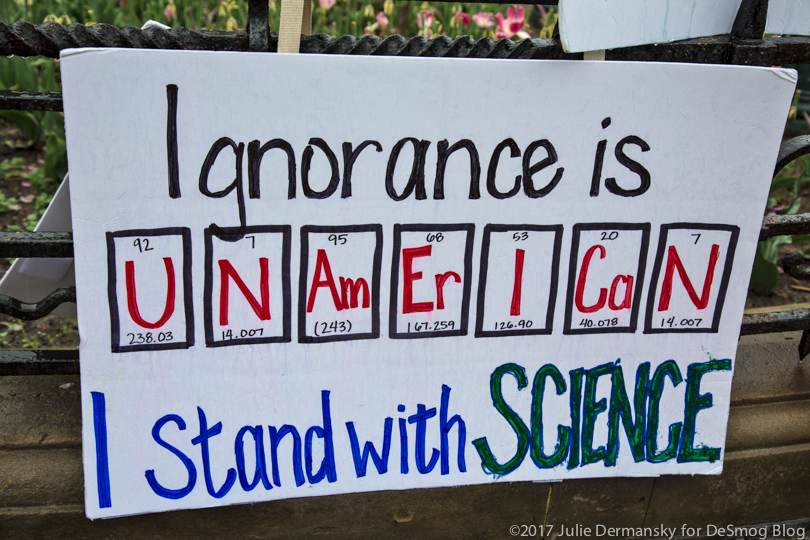 One of the signs carried during the March for Science in Washington, D.C., left behind on a fence near the Capitol building. 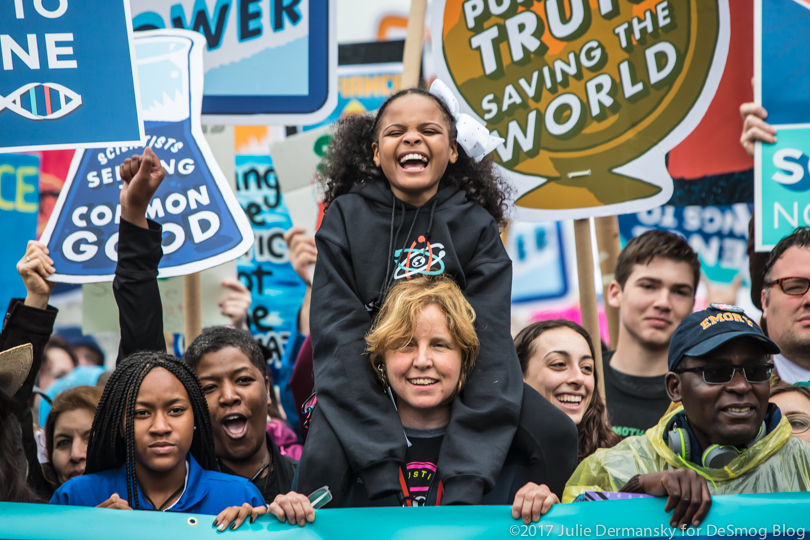 Little Miss Flint, whose real name is Mari Copeny and is known for writing former President Obama a letter about Flint’s water, stands in the front line of those taking part in the March for Science in Washington, D.C. 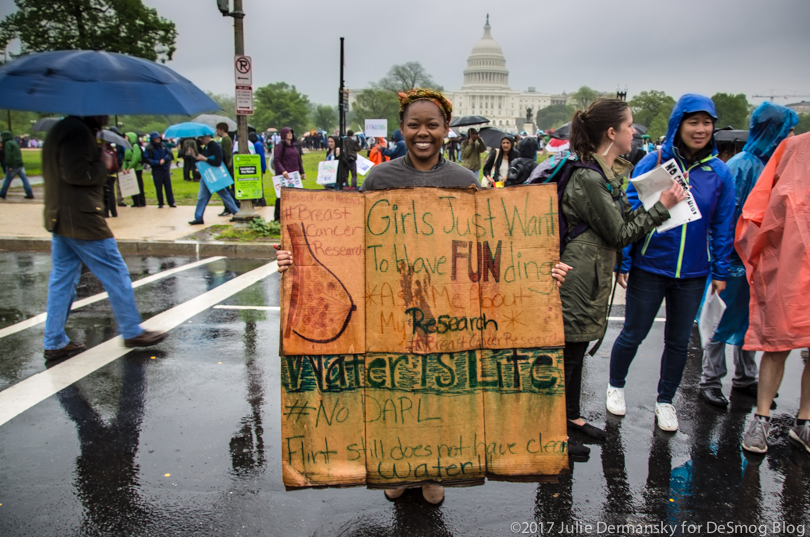 Ivory Dean, a breast cancer researcher at the March for Science in Washington, D.C. 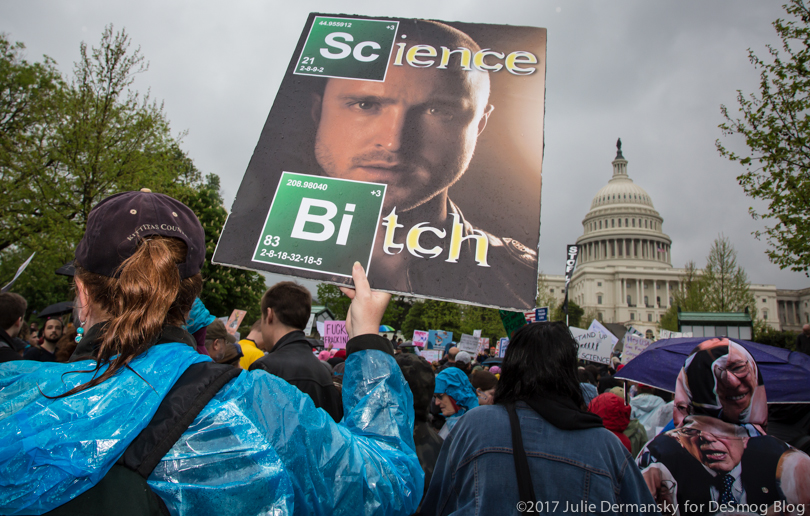 Jesse from the TV show Breaking Bad on a sign held by one of the marchers at the March for Science in Washington, D.C. 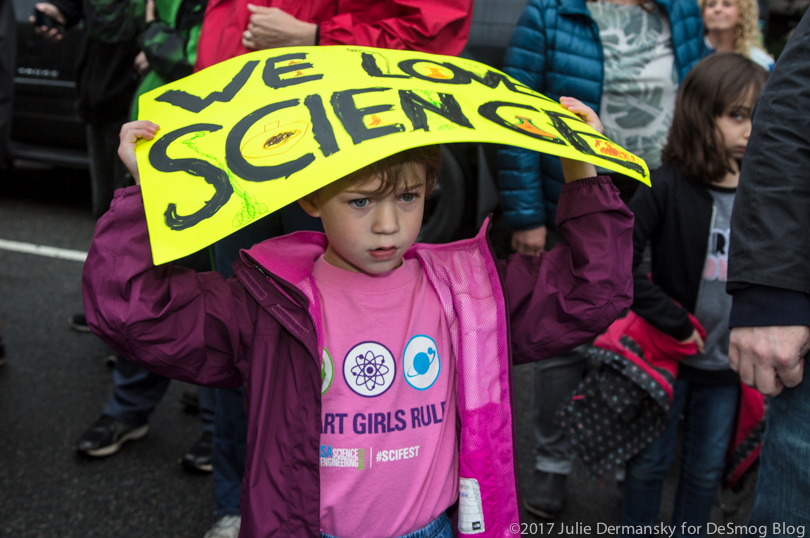 A young girl using her sign to protect her from rain drops that fell on and off during the March for Science in Washington, D.C. 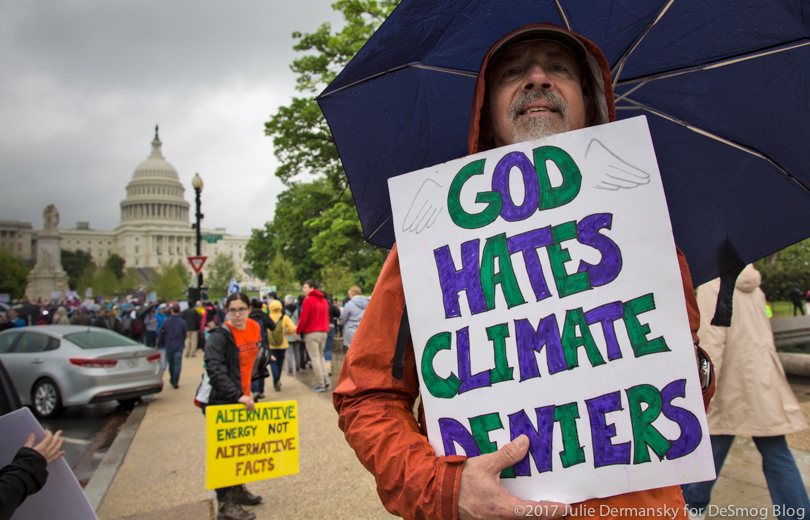 After the March for Science, people gathered with their signs in front of the Capitol building before dispersing. 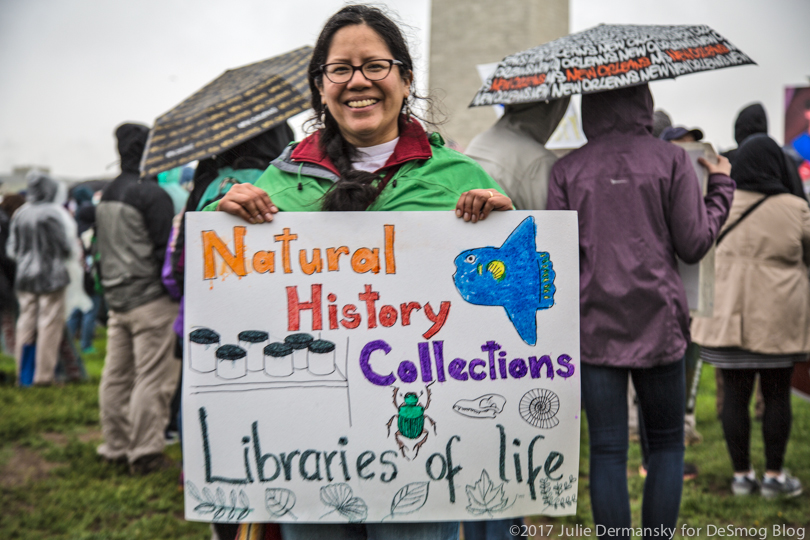 Norma Salcedo, an ichthyologist based in South Carolina who studies catfish in the Amazon is concerned about cuts to science programs by the Trump administration and how they will impact already underfunded natural history collections across the county. 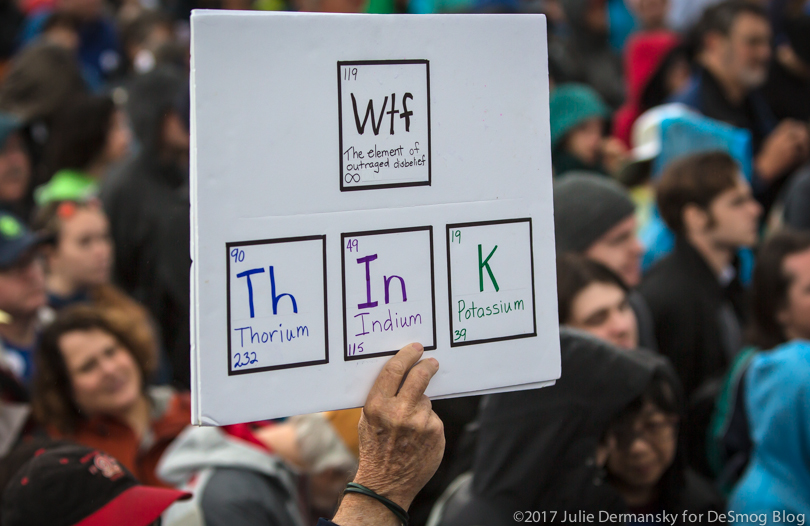 One of the many science-themed signs calling for a return to reason at the March for Science in Washington, D.C.

Main image: Bill Nye the Science Guy, wearing his signature bow tie, in the center of the front line of the March for Science in Washington, D.C. All photos by Julie Dermansky.

Hope Springs Through Verse: Global Vaccine Poem Has Grown to More Than 1,700 Stanzas Worldwide, Gains Attention of Ohio Governor
Wick Poetry Center Announces Collaboration with the Poetry Coalition to Address Environmental Justice in a Series of Programs
Flashes of Inspiration: During a Pandemic We Can Celebrate Nature
Wick Poetry Center
College of Arts & Sciences