The Two Feet of One Walking: Poets March for Science

This Saturday tens of thousands of people are expected to assemble and walk in the March for Science in Washington, D.C., and many more will join satellite marches in more than five hundred locations across the world. While many researchers, park rangers, biologists, chemists, ecologists, neuroscientists, and members of the scientific world are expected to attend, a group of poets—part of Poets for Science, an initiative organized by poet Jane Hirshfield in collaboration with Kent State University’s Wick Poetry Center—will be walking among them. Poets for Science will engage poets from across the country in solidarity with the rally’s stated aim—to celebrate and defend the sciences, especially in the face of a presidential administration that is attempting to defund and limit scientific research—with a poetry tent, mini poetry workshops, and a reading by Hirshfield as part of the main march in Washington, D.C. “From the time I heard the March for Science was being planned, I knew I would go,” says Hirshfield. “The thought came that poetry should be part of it. Poetry and science aren’t opposites. They are the two feet of one walking.” 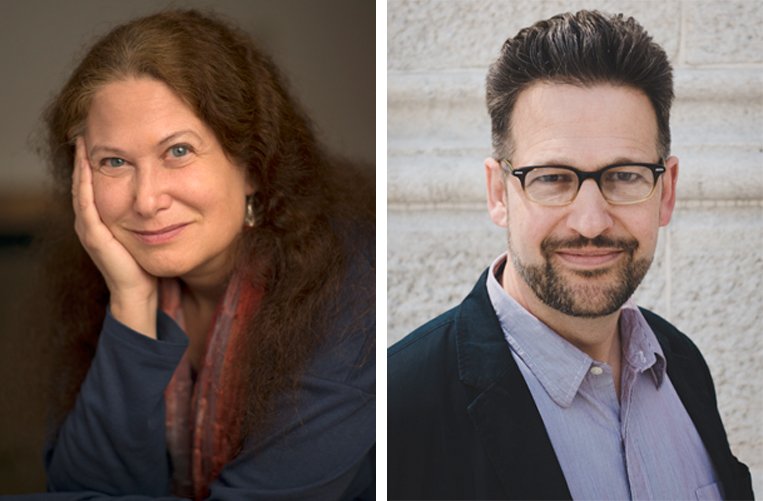 Like the rally’s organizers, Hirshfield was galvanized to action just a few days after Donald Trump took office as president. “When I heard the news on January 25 that scientists were being silenced, that information about climate change was being taken down from governmental websites, that the Environmental Protection Agency (EPA) and Federal Drug Administration and National Park scientists were being told not to speak publicly about their research, I wrote a poem, ‘On the Fifth Day,’” says Hirshfield. She sent the poem to a few scientist friends who passed it along to fellow scientists and activists. Their positive response compelled her to reach out to the March for Science, which is organized along with the Earth Day Network (April 22 is Earth Day), to assemble a poetry presence. “It was the only way I could begin to take in something so incomprehensible and cruel as the throwing overboard of the planet’s viable future, the dismissal of reality and evidence in decision making, the dismissal of other beings, the dismissal of objective truth, the dismissal of any values beyond the immediately bankable,” says Hirshfield. “Action is the antidote to despair.”

Hirshfield also reached out for support from the Wick Poetry Center, an organization that builds community via poetry in northeast Ohio and beyond through outreach and educational programs. David Hassler, the center’s director, agreed to help without hesitation. “It’s such an important effort in this day and age—when the National Endowment for the Arts (NEA) and the EPA and the National Institutes for Health (NIH) are all under attack—for poetry to join forces with our science community and find points of intersection,” says Hassler, referring to Trump’s budget plan, which proposes eliminating the NEA and cutting funding for the EPA and the NIH, the country’s leading biomedical research facility, by 31 percent and 18 percent, respectively. Within a few short weeks, Hassler and the Wick staff worked with Hirshfield to expand her vision and bring poetry to the March in Washington, D.C. on a variety of platforms.

In addition to Hirshfield reading her poem “On the Fifth Day” as part of the rally’s main-stage program, Wick and Hirshfield will host a poetry tent at the teach-in—a series of informal classes and discussions on topics related to science—at the Mall preceding the physical march on the Capitol, which starts at 2 PM. Attendees will be invited to participate in five pop-up poetry workshops taught by the Wick staff and local poets Kim Roberts, Danielle Badra, Marlena Chertock, and John James. The tent will also distribute posters bearing lines of poetry that attendees can carry, as well as postcards with excerpts of scientific texts written by speakers at the march, which includes researchers, doctors, and leaders in the scientific community. The postcards will include instructions for how to make an erasure poem of the text and tips for posting to social media; Wick will then publish these poems on the Wick website as its part of its Emerge project. Poets for Science will also hold a fund-raising event with poetry and music at Dupont Underground on Thursday, April 20, to drum up support.

Poetry will also be present on a large, physical scale: Wick has created a series of twenty-three seven-foot posters of poems related to science. These posters will line the poetry tent on the Mall and are also collected online at science.travelingstanzas.com. Hirshfield, who curated the poems, describes the posters as “Human-sized poems, bringing forward the human side of science—how we think and feel with its knowledge, how its knowledge touches our lives in ways from galactic to microscopic.” The posters, which enhance the images in each poem, are designed by the Kent, Ohio–based design firm Each + Every, run by Nate Mucha. A moon and planet hover beneath Tracy K. Smith’s poem about her father who worked as an engineer for the Hubble Telescope; spaghetti swirls beneath Kimiko Hahn’s meditation on the brain’s neural circuits while watching her daughter eat spaghetti; a turtle accompanies Gary Snyder’s celebration of Turtle Island. 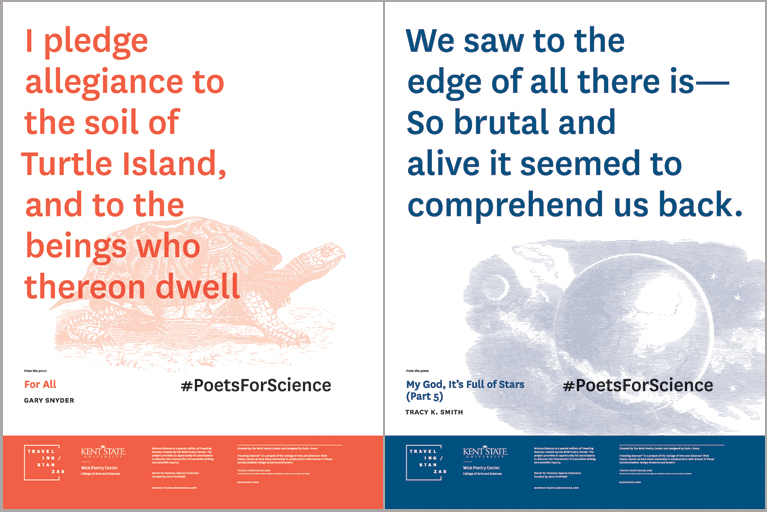 The poems, which Hirshfield selected to represent a range of poets and scientific fields—ornithology, biology, astronomy, conservation, and chemistry, to name a few—also gesture at the more core resonance between poetry and science: a shared a sense of awe for the unknown and an impulse to understand with rigor and clarity how we know what we know. “Both poetry and science search out new understandings, understandings so close to being beyond reach that hard-won, precise expression is the only way to find and convey them at all,” says Hirshfield. “Poetry and science each seek to ground our lives both in what exists and in the acknowledgment of mystery and awe, of what is still past grasping but not past feeling.” Hassler agrees, adding that poets can help tell the story of science, which often uses technical and specialized language not immediately accessible to the layperson. “Poetry helps make that leap of emotionally feeling scientific understanding and principles—poems can connect our minds and hearts often more effectively than purely rational discourse and language,” he says.

Hirshfield and Hassler both hope to carry on the Poets for Science initiative beyond this week’s events; after all, the March for Science is only part of a larger, ongoing conversation about science and policy, especially as funding for the NIH and the EPA still hangs in the balance while Congress negotiates the federal budget for the coming fiscal year, and it remains unclear if Trump will withdraw from the Paris Agreement to curb greenhouse gas emissions, signed last year by nearly two hundred countries. To continue that conversation about the role of science, Hassler and Hirshfield would both like to create an exhibit of the posters that could tour science museums across the nation. At the very least, Wick will maintain the website of all the posters and Emerge erasure poems that are created during Saturday’s march.

For now, Hirshfield says poets can defend the sciences by showing up to the rally, and also by writing and paying attention to one’s daily life. “Poets defend science every time we notice the drinkable water that comes from most of our sink taps,” she says. “Poetry is, among other things, a technology of noticing better what is always in front of your eyes and crossing your tongue.” She adds that after the march, poets can also stay involved in concrete ways by sending e-mails, making donations, and picking up the phone. “Most of the time a poet is just one more person,” she says. “But a person perhaps extra dedicated to seeing clearly, feeling deeply, and keeping the windows of self open to what is beyond the selfish.”

For more information about the March for Science, visit www.marchforscience.com.

Dana Isokawa is the associate editor of Poets & Writers Magazine.