Changing the Future, One Student At A Time 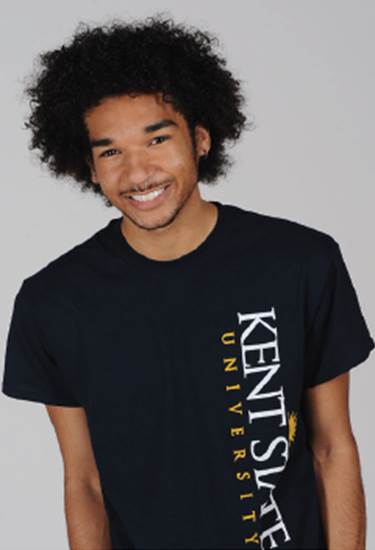 LaQuann Dawson Jr., ’17, is no stranger to hard work. He’s double-majoring in two of Kent State University’s most challenging academic programs, fashion and graphic design. Also, as he’s been doing since the age of 16, he works as a freelance photographer, graphic designer and painter.
“I’m the oldest of six, and I’m paying for college on my own,” LaQuann says. “I take pride in being independent and in setting a good example for my siblings. I think it makes me well-rounded to balance work, school and extracurricular activities.” LaQuann was accepted into several well-known fashion and design schools in New York. He chose to attend Kent State based on the reputation of its programs.

LaQuann says Kent State’s impressive array of options for financial assistance also contributed to his decision to become a Golden Flash.
“I’ve been lucky to earn academic scholarships, and I’m grateful for that,” he says. “Kent State would be a very different place if alumni didn’t give back in order to give students like me a chance.”

LaQuann is just one of many Kent State students who have benefitted from an endowment or other private scholarship gift, including the Oscar Ritchie Scholarship. His hard work and diligence have paid off, but his scholarships have enabled him to fully immerse himself in his education and college experiences without burdening his family or his own financial future, helping ensure his future success.

Continue to the next page.