RNA-protein interactions are essential for many critical cellular processes such as post-transcriptional gene regulation and protein biosynthesis. In our laboratory we study the biophysics of RNA-Protein interactions. In particular we are investigating how various nucleotide modifications found in ribosomal RNA modulate RNA-protein interactions during the bacterial ribosome assembly. Synthesis of new ribosomes is critical for the survival of all organisms. In the early 1960s, Nomura and colleagues found that the 30S ribosomal subunit can be assembled in vitro and the ribosomal proteins are added hierarchically and cooperatively. Interestingly however, both assembly of the ribosome and post-transcriptional modification of rRNA occur simultaneously during ribosome biogenesis in vivo. Unfortunately, the interrelationship of these two processes is not well studied. Our goal is to understand how post‐transcriptional RNA modifications in 16S rRNA and their corresponding modification enzymes influence 30S ribosome assembly. For example, modification enzymes can stabilize the binding of ribosomal proteins to productive pre-30S complexes (thermodynamic cooperativity) as shown in the top panel of figure 1. Similarly, due to “kinetic cooperativity”, modification enzymes can prevent formation of unproductive intermediate complexes by blocking the binding site of certain ribosomal proteins. On the other hand, structural and stability changes caused by modified ribonucleotides can favor the binding of ribosomal proteins (Figure 1, bottom panel). We use various biophysical methods including single-molecule fluorescence measurements to investigate the preferred pathways of 30S assembly in the presence of the nucleotide modifications and modification enzymes. 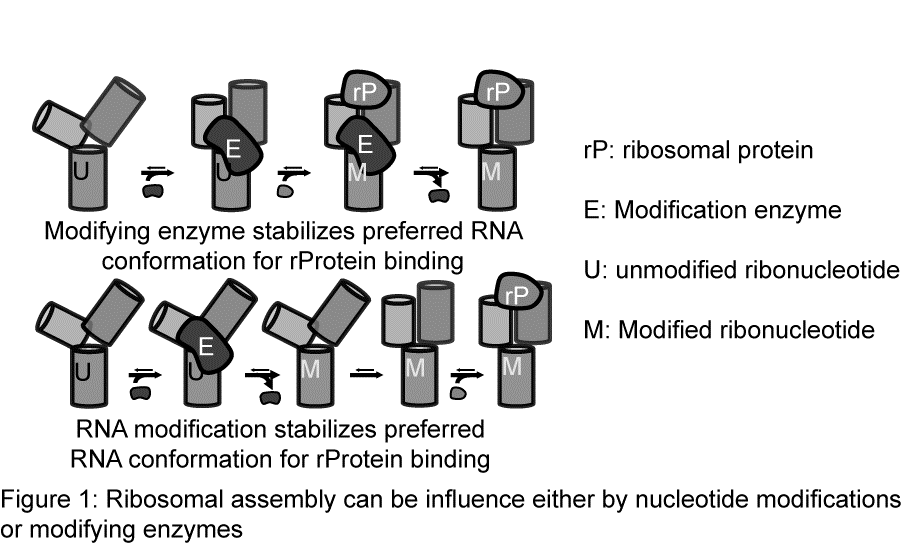