The national anthem at sporting events has been a hot button topic in 2016. While some have chosen to sit or stand, the Kent State University men's basketball team decided to take a different route. 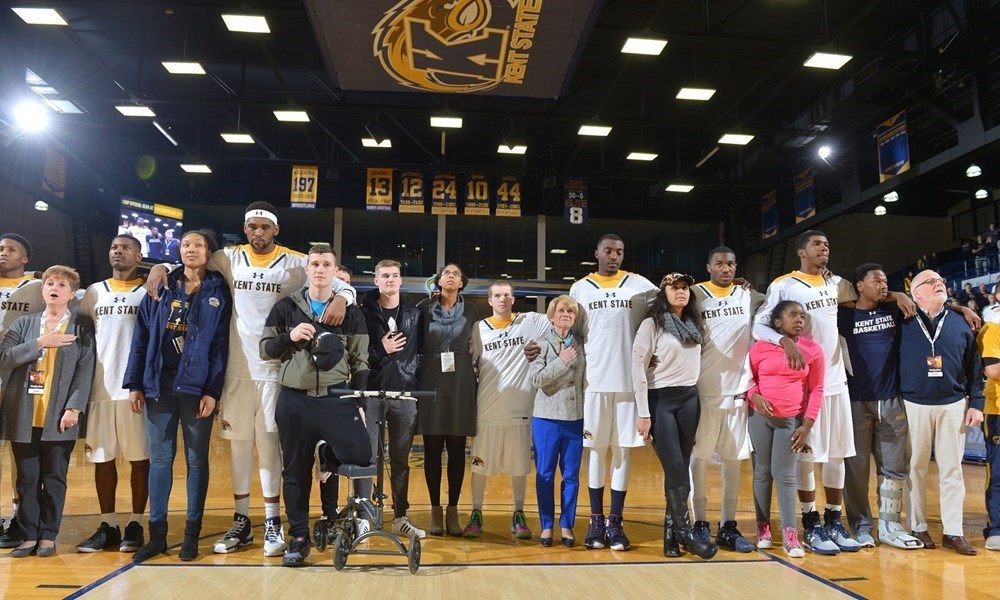 Prior to "The Star-Spangled Banner" being played for Kent State's home opener against Mississippi Valley State, each of Kent State's men's basketball student-athletes chose to select a fan of a different race from the crowd to stand with them in solidarity during the national anthem. The decision to use the national anthem as a time to show solidarity in Kent State's diverse campus community was made by the team's seniors and captains, not athletic department officials. The student-athletes brought their idea to the athletic department's coaches and staff, who unanimously supported them in their decision. Kent State strives for inclusive excellence, and supporting this decision by student-athletes matched the core values of the university.

National and local media captured the show of solidarity. See some of the coverage here:

"We understand all of the issues going on in our world," stated sophomore point guard Jalen Avery, on behalf of his teammates. "In these times, we felt it was important to show a sign of unity in our community."

"The players approached the coaching staff with this idea, and we fully supported them," said head coach Rob Senderoff. "It takes courage for our players to make a statement like this, and I believe it is a representation of the unity in our campus community."

"This is a great example of Kent State student-athletes stepping up as leaders in our diverse community," stated Director of Athletics Joel Nielsen. "We encourage dialogue between coaches and student-athletes when it comes to these challenging issues. We will continue to foster an open environment for student-athletes of all beliefs, backgrounds and communities."

Kent State is committed to the creation and nurturing of a diverse community of individuals through inclusive excellence. Diversity involves recognizing the value of differences and the inclusion of all members of the community including those that experience discrimination or underrepresentation.