KENT, Ohio – The School of Art Collection and Galleries at Kent State University are pleased to announce a new exhibit “Jerry Kalback, Deadball Series: an illustrator’s process." The exhibit will be on display July 22- August 6, 2022, at the KSU Downtown Gallery, located at 141 East Main Street in Kent, Ohio.

This exhibit highlights the outstanding research of the accomplished illustrator, Jerry Kalback (1950–2021). Kalback was fascinated by the Deadball era of Major League Baseball (1900–1919) and worked on this special project for nine years starting in 2012 until his untimely death in 2021. Included in this show are thirty-seven paintings and five sketchbooks. The sketchbooks have examples of Kalback’s preliminary drawings that helped shape the artist’s ideas about what would become each final piece. Details about how the chosen subjects lived and died are included with the drawings along with information about the materials used to create the final artwork.

Jerry Kalback (1950–2021) was a retired emeritus professor from Kent State University, School of Visual Communication Design. Jerry was born in Wilkinsburg, PA; moving to Orchard Park, NY during high school. He went on to study at SUNY Buffalo State College, obtaining both his Bachelor's and Master's degrees in Art Education. This was followed by two years of studying under the most acclaimed American Illustrators as part of the Illustrators Workshop in New York City. After teaching in childhood art education in Orchard Park; Jerry and the family moved on to teach at Alberta College of Art in Calgary, Alberta, Canada. He found his eventual home and lasting career at Kent State University from 1983-2013, a dedicated 30 years in Visual Communication Design. He was awarded the Distinguished Teaching Award in 2001, followed by the highly acclaimed title of Professor Emeritus upon retirement in 2013.

About the Deadball Series

Jerry was an avid baseball fan, and for many years had a season ticket to his beloved Cleveland Indians (now Guardians). The Deadball era is generally considered to have spanned the years 1900-1919 and many famous ballplayers played during the Deadball era. Babe Ruth, Ty Cobb, Casey Stengel, Johnny Evers and Honus Wagner are among the players Jerry illustrated before his passing.

The Deadball era was characterized as a low-scoring, defense and pitching dominated game with relatively few home runs compared to today’s game.

Why is it called “Deadball”? Deadball era pitchers were allowed to modify the ball during the game! It was common for pitchers to scuff the ball against a brick wall, or with an emery board. Pitchers also spit or rubbed dirt on the ball, all of which made the formerly pristine white ball much harder to see. The same ball was also used for the entire game, thus over the duration of the game the ball would become increasingly dirty, scuffed and worn, resulting in a worn out ‘dead’ ball, that was hard to see and hit, and would not travel as far when a player made contact.

In 1920 major league baseball changed several rules, including replacing the ball frequently, and prohibiting pitchers from modifying the ball, which began the “Liveball” era and changed the game to the modern, free swinging, offense dominated game of today.

and for the generosity of loaning this precious work to share with all of you.

•This exhibit is presented with support from the Ohio Arts Council. 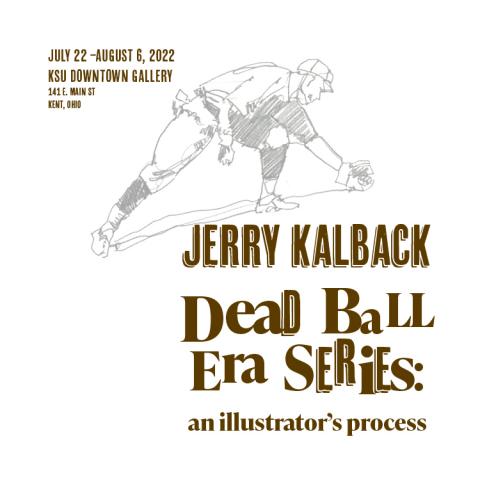