E Pluribus:
Reflections on the Anniversary of 9/11
August 29 – September 29, 2017
Monday, September 11 – Workshop
performance by Sabba Elahi
Artists respond to the 9/11 attacks and the repercussions of those tragic events from which the world still reels.  Through an unsentimental perspective, earnest engagement, research and lived experience, combined with beauty and craft, they call attention to and offer opportunities for engagement about topics ranging from drone strikes in Pakistan, to those detained without trial in Guantanamo, to the destruction and looting of ancient and contemporary culture from Iraq to Syria.  Artists included in the show are Mahwish Chishty, Amber Ginsberg and Aaron Hughes, Jackie Kazarian, Michael Rakowitz, Alison Ruttan, Barbara Koenen, Mary King and Sabba Elahi.
-
Shock of the Now
October 17 - November 17, 2017
Title of the Exhibit: “Shock of the Now” (A play on words from the book/TV Series “Shock of the New” by Robert Hughes.)
“The Hieronymus Objects Collection is inspired by the sixteenth-century Netherlandish painter Hieronymus Bosch, whose stirring oil paintings depict fantastical scenes that instill both delight and terror. Like Bosch's paintings, the collection, which encompasses ceramics, designed objects, paintings, photography, prints, sculpture, and other curiosities, traverses the grotesque and picturesque, the sacred and profane. It is built around an appreciation for experimentation; sensuous, biomorphic forms; refined, carefully wrought materials; and a sense of humor and whimsy. While the collection spans both time and geography, contemporary ceramics from Asia and the US and twentieth-century American and European design are among its strengths."
-
Threads New Work by Janice Lessman-Moss & Rowland Ricketts
Fall 2016
link to catalog below:
https://www-s3-live.kent.edu/s3fs-root/s3fs-public/file/Threads%20small…

Sale within Center for the Visual Arts Atrium

Sale within Atrium and Gallery

Sale within the Center for the Visual Arts Atrium

Sale within Atrium and Gallery 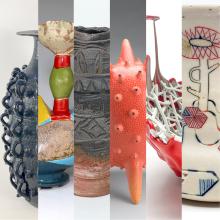 reception: Now and Then: Seven Decades of Kent State Ceramics

Now and Then: Seven Decades of Kent State Ceramics, featuring work from current and former faculty, notable alums, and a juried selection of works from an alum call for entries juried by noted artists Matt Wedel and April D. Felipe.

Now and Then: Seven decades of Kent State Ceramics

Jerry Kalback exhibition draws inspiration from historic “Deadball” era of baseball   KENT, Ohio – The School of Art Collection and Galleries at Kent State University are pleased to announce a new exhibit “Jerry Kalback, Deadball Series: an illustrator’s process." The exhibit will be on display July 22- August 6, 2022, at the KSU Downtown Gallery, located at 141 East Main Street in Kent, Ohio.

Artwork created by undergraduate and graduate art majors, selected by guest juror Christy Davis of the Canton Museum of Art, will be on view in the CVA Gallery. Awards will be announced this evening.