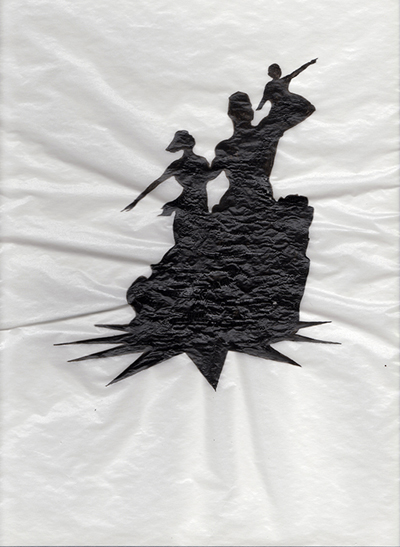 Icons and symbols permeate our visual landscape. Sometimes the symbols are so ubiquitous that we tend to not even notice them — like a star player’s soccer jersey, the green neon cross of a pharmacy or the national flag. Whether national, regional, cultural or personal, these visual cues were created to stand in as meaningful shorthand for specific ideas, yet they also have the ability to be appropriated, undermined and reimagined. Now they allude to multiple ideas at once, and there is no way of knowing what associations will be added or lost in the future. Because symbols have such broad parameters, and are prone to mutations based on what people project onto them, the role of interpretation leads us to multiple, even divergent, associations.

In this section, some artists — like Laylah Amatullah Barrayn and Manthia Diawara — look to historic figures who have become icons of philosophy and politics for Senegal, both regionally and internationally. The words and actions of these men continue to shape debates today, and their celebrity status elevates them from fellow humans to icons. Even the venerated Sufi leader Cheikh Amadou Bamba, whose visual legacy consists of only a single photograph, appears in hand-painted murals, as a sticker on a taxi dashboard, and in talismans worn by followers of his Mouride brotherhood. From Touba to Dakar, the ubiquity of his image signals both his historic and contemporary significance — not only as a religious leader, but also as a symbol of colonial resistance, regional pride, or a rallying figure for politics.

Other artists, like Amalia Ramanankirahina, engage with human constructions — monuments, towers, memorials — to address the scale and permanence given to particular people and ideals. Her Jardin d’essai series features an intimately-scaled silhouette of the African Renaissance Monument, a depiction that belies the titanic quality of its 49-meter height. Included in her “garden” of such icons, the Senegalese monument shrinks to mere marker of place that once caught Ramanankirahina’s eye during her travels. She reminds the viewer that what may dominate the news cycle or visual landscape of one nation may only be a vague totem when translated to distant places.

Depending on the viewer, certain symbols are prone to emotionally charged interpretations. With a vision like Lifadieng (Khalifa Dieng), this personal connection can even empower the artist to establish new icons. Isolating a single plastic or wooden chair as the subject of each painting, he offers this staple of the West African landscape as an embodiment of community and solidarity, and of the tradition to rest and reflect. A stabilizing force, the chairs witnessed local debates, family gatherings and countless tea ceremonies. Proclaiming their role as a symbol for Senegalese community, Lifadieng brings the duty of icon from the acclaimed to the mundane.